The attacks killed eight civilians and wounded dozens of others, including a 28-year-old pregnant woman who died of her wounds, along with her fetus, on November 15. Others killed include a 14-year-old girl, two girls under age 6, and a 4-month-old boy. The attacks wounded at least 75 other Syrians who had sought refuge from elsewhere in Syria in 4 camps across northwest Idlib governate. Two witnesses said there was no military activity by armed groups in or around the camps at the time of the attacks.

“The Syrian-Russian military alliance continues to defiantly use banned weapons against a trapped civilian population in Syria with devastating consequences,” said Adam Coogle, deputy Middle East director at Human Rights Watch. “Not only are cluster munitions harming Syrians today, but unexploded submunitions can go on killing long into the future.”

Cluster munitions can be fired from the ground by artillery systems like rockets and projectiles or dropped from aircraft. They typically disperse in the air, spreading multiple submunitions or bomblets indiscriminately over an area about the size of a city block. Many fail to explode on initial impact, leaving dangerous duds that can kill and maim, like landmines, for years or even decades unless cleared and destroyed.

The 2008 Convention on Cluster Munitions, which 110 countries have ratified and 13 more have signed, comprehensively prohibits these weapons and requires the clearance of contaminated areas, and assistance to victims. Neither Syria nor Russia are parties. Syria Civil Defence, a volunteer search-and-rescue group operating in opposition-held areas, has been clearing unexploded ordnance since 2016.

Following the November 6 cluster munitions attacks, the group told Human Rights Watch that they had found and cleared 14 unexploded submunitions.

Human Rights Watch interviewed eight witnesses in the camps, who said that the strikes took place sometime between 6 and 7 a.m., when some people were still sleeping, others were at the mosque for morning prayers, and children were getting ready for school. Researchers also spoke to first responders and analyzed videos and photographs taken during and just after the attacks that were uploaded to social media platforms or shared directly with researchers.

The camps, on the outskirts of the towns of Kafr Jalis, Murin, and Kafr Ruhin, host over 1,000 internally displaced families. All are within 9 kilometers of Idlib city. Idlib governorate, is largely under the control of anti-government armed groups loosely linked to Turkey, and is home to at least 3 million civilians, half of them displaced from elsewhere in Syria.

The densely populated Maram camp, near the town of Kafr Jalis was hardest hit, with six deaths. Human Rights Watch separately interviewed five residents of the camp. The camp is managed by the Maram Foundation for Relief and Development, a non-profit humanitarian organization.

“The attack took place as children were having breakfast and getting ready to go to school,” said Motasim Addad, the camp manager at Maram. “The explosions came one after the other, fire spread almost across the camp, the explosions led to panic and fear and there was shrapnel everywhere.”

Syria Civil Defence said that the camps were damaged, with 24 trailers destroyed and partial damage to 160 others. Addad said the camp’s water and sanitation networks were also damaged. 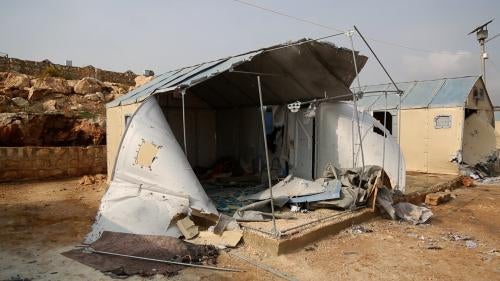 On November 7, Syria’s state news agency, SANA, said that the Syrian government, in collaboration with the Russian air force attacked a forested area used by terrorist groups as a headquarters and a training ground. The report claimed the operation was carried out “with precision.”

The camps at Murin and Kafr Rohein are approximately 1 to 3 kilometers from the forested area. A rocket landed just over 250 meters from Wadi Khaled camp and Maram camp was directly struck. “There are no military bases in this camp, no military elements whatsoever in this area,” said Addad.

On the eve of November 6, the Syrian Observatory for Human Rights stated that the “Operation Room of Al Fateh Al Mubin,” a coalition of local armed factions operating in the area, struck Syrian government positions in Saraqeb, Maarat Al Numan, and Khan Al Sibl in retaliation. The coalition includes Hay’et Tahrir al-Sham (HTS), the dominant anti-government group in Idlib, which the United States designates a foreign terrorist organization and on which the United Nations has imposed sanctions.

The Syrian displacement crisis remains one of the most dire and protracted consequences of the war. Since the onset of the war in 2011, 12.3 million people have been forced to flee their homes, according to the United Nations Office for the Coordination of Humanitarian Affairs (OCHA), with 6.7 million currently internally displaced across the country. Four of those interviewed said that they and their families had been displaced at least three times since the start of the conflict. Two of the residents of Maram camp said they came to the camp expecting it to be safe. Most camp residents who fled the attack have since returned as “they have nowhere else to go,” Addad said.

“I had been praying and preparing breakfast for my husband as he was about to leave to the olive fields,” said a 25-year-old woman originally from Hama who said she arrived in Maram camp with her husband and three children three years ago. “I jumped over my daughters to cover them. I thought we will die together, my daughters and I.”

Another resident of Maram camp said that the attack injured 4 of his 12 children. “My wife is at the hospital still in critical condition, and one of my children is in intensive care [in Turkey],” he said on November 9. “This tent can shield children?” he said. “You use this [weapon] to strike? It will cut even a camel.” 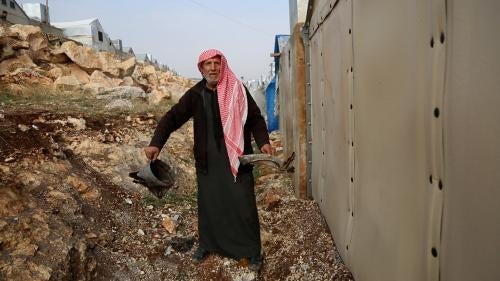 Human Rights Watch also spoke to Abu Mohammad, the camp manager at Water Station Camp in Kafr Ruhin, a kilometer north of the affected forested area and a kilometer west of Maram camp. He said he had only recently received trailers to replace the tents housing 111 displaced families around one month ago. “In my camp,” he said. “A total of 12 people were injured, and one woman was killed. She was 65, a mother to four young men. One of the explosives landed just a meter away from her. Her husband’s legs were broken in the attack.” Abu Mohammad also reported damage to water tankers and solar equipment. He said some of the trailers needed replacing.

Ahmad Eid al-Hussein, the camp manager of Wadi Khaled camp, 2 kilometers west of Idlib city, said that the strikes injured eight camp residents and caused extensive damage to the camp. “I fled with almost everyone else as the cluster munitions were falling,” he said. “These moments cannot be described, you can’t even begin to imagine … Wherever you looked around you, missiles were falling.”

Photographs of the physical remnants of a weapon used in the attacks and shared on social media by the Syria Civil Defence show an expended cargo section of a 9M27K-series Uragan cluster munition rocket lodged in the ground where it landed near Wadi Khaled camp and at least one unexploded 9N235 submunition nearby.

Each 220mm 9M27K-series Uragan (“Hurricane”) surface-to-surface rocket has a range of 10 to 35 kilometers and contains 30 9N235 or 30 9N210 fragmentation submunitions. Human Rights Watch has previously reported the Syrian government’s use of this type of cluster munition rocket, including an October 9, 2015 attack on a camp for internally displaced people. Russian forces have also used the same type of cluster munition rockets in Ukraine in 2022.

Since the outset of the armed conflict in Syria in 2012, Human Rights Watch has documented civilian harm from Syrian government use of cluster munitions. In March 2020, Turkey and Russia agreed to an uneasy ceasefire for all warring parties in Idlib governorate. Attacks have continued despite the ceasefire.

As part of a military alliance, Russia is jointly responsible for the use of prohibited weapons and any violations of the laws of war committed in Syria. It should immediately cease providing munitions to its ally and urge Syria to stop using them.

“Concerted international efforts are needed to demonstrate that there are consequences for continuing atrocities in Syria,” Coogle said. “Impunity will only breed more unlawful attacks and civilian carnage.”