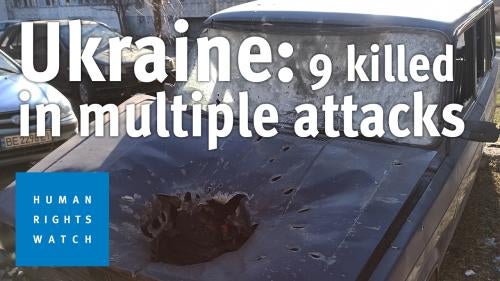 (Berlin) – Russian forces repeatedly fired cluster munition rockets into the densely populated city of Mykolaiv, in southern Ukraine, during separate attacks on March 7, 11, and 13, 2022, Human Rights Watch said today. An attack on March 13 reportedly killed nine civilians, who were apparently in line at a cash machine. The attacks also injured several other civilians and damaged homes, businesses, and civilian vehicles.

Cluster munitions are subject to an international treaty ban because of their widespread indiscriminate effect and long-lasting danger to civilians.

Human Rights Watch interviewed by phone six witnesses to the attacks and analyzed dozens of photographs and videos, shared by witnesses or posted on social media. They show damage from the attacks, four dead bodies, and remnants of the weapons that were used, including of Uragan and Smerch cluster munition rockets, as well as remnants and unexploded 9N210 fragmentation submunitions.

On March 7, the first day of the attacks, a handyman and his wife and children were asleep when their neighborhood came under attack at about 5 a.m. Their home is about two kilometers from the city’s port. They went to shelter in their neighbor’s basement as the attacks continued. At about 10 a.m., two rockets landed next to his house, one in the yard and another behind his home. “I heard a whistling sound and the noise of many explosions,” the man said. “The basement was vibrating.” He later found his yard destroyed, and a team from the Emergency Service, the government body that carries out demining and clearance, told him that the rockets were both Smerch.

Attacks also took place in Solyani, a northern suburb of Mykolaiv with residential neighborhoods and a military base, on the morning of March 7. A truck driver from Solyani, a member of the civilian neighborhood watch since the war began, patrolled the area after the attacks ended. He said that three civilians were wounded and that he saw what Human Rights Watch identified, based on his photographs, as four expended rocket motors and one cluster munition cargo carrier from 9M55K Smerch rockets. One rocket motor and tailfin assembly of a Smerch rocket had landed in the yard of a preschool, two rocket motors landed between houses, and the fourth landed in the middle of a street, while the carrier assembly landed on the riverbank.

The location where these rockets and carrier landed was at least one kilometer from a military base, which the truck driver identified as the only potential military target in the area.

Russian forces also fired rocket artillery into the Inhulsky neighborhood, in the eastern part of the city, on March 7. A resident of Inhulsky, a sailor, said that he was awakened at 4:45 a.m. by the sound of explosions. They came closer and closer to his five-story apartment building, and then it was hit. “I felt like my legs had been cut off and like the whole building was going to collapse,” he said. He ran into the hallway and found an older woman bleeding from her head. He said the rocket hit the hallway, stairwell, and several kitchens on the second and third floors of the building.

The sailor shared 10 videos with Human Rights Watch, including of the bleeding woman, the damage to his building, and CCTV footage of the outside of the building at the time of the attack, as well as 17 photographs of the damage to the building and cars parked outside. Multiple videos show uniform fragmentation patterns consistent with the detonation of fragmentation munitions.

While not a cluster munition rocket, rocket artillery with high-explosive/fragmentation warheads can have an indiscriminate impact, and the use of explosive weapons in populated areas heightens concerns of unlawful, indiscriminate, and disproportionate attacks.

On March 11 multiple attacks hit the Inhulsky neighborhood, again in the early morning hours. An IT specialist living in the center of the city said she heard a wooshing sound two or three times when the attacks began. She later visited two sites that had been hit. She shared 36 photographs with Human Rights Watch, showing the damage she observed, including to the windows of a nine-story building and five cars. The photographs show impact spatters of a submunition detonation in the asphalt and on two cars. A remnant of the cargo section of a 9M27K-series Uragan cluster munition rocket is also visible.

The coordinates of one photograph she shared of an unexploded 9N210/235 submunition lying on a patch of grass next to the street, places it at about 1.7 kilometers from the Zorya factory. The factory produces gas turbines, mostly for seafaring defense technology and vessels. The factory may have been identified as a potential military target, but the significant distance between the factory and the civilian objects damaged also suggests the attacks were indiscriminate.

The attacks on the morning of March 11 also hit Pivnichnyy, the suburb directly north of Solyani and about 600 meters from the military base. The truck driver and neighborhood watch member from Solyani said he arrived at the site that afternoon. An Emergency Service team member told him they had destroyed one submunition that had not detonated on impact and had been lying behind the wall of a 10-story building, he said. The Emergency Service also shared with the truck driver a photo of the munition the team took, which Human Rights Watch identified as a rocket-delivered fragmentation submunition.

The truck driver said he saw that three cluster munition rocket cargo carriers had hit the boiler room of a building, the roof of a 10-story apartment block, and the yard of a preschool. The building was marked with small grooves caused by the spraying of metal fragments, which were visible as high up as the seventh story, he said. Photos he provided, which he said were taken on March 11 in Pivnichnyy, show impact spatters of a fragmentation submunition detonation in the concrete and damage to windows.

On March 13, Russian forces attacked at least three areas of Mykolaiv with rocket artillery carrying submunition payloads. The handyman was in his kitchen at about 8 a.m., when a rocket motor tore through his roof, punctured an interior wall, and came to rest in the bathroom. Based on seven photographs he shared, Human Rights Watch identified the rocket motor and tailfin assembly as a Uragan 9M27K series cluster munition rocket. Though he was only meters away from the rocket motor, he was not injured, but the attack damaged his house.

The truck driver said there was an attack on Solyani at about the same time. He said he heard lots of small explosions at about 8 a.m., and when he later went outside, he “saw lots of black smoke and then a crater in the middle of the street outside of my house, and lots of smaller grooves encircling the crater.” He said he saw the Emergency Service putting out a fire in one home hit by a rocket. He and his colleagues from the neighborhood watch rescued a woman and her daughter trapped in a basement by the fire. Human Rights Watch reviewed four photos the truck driver took on March 14 and identified a cargo section for fragmentation submunitions ejected from a Smerch 9M55K cluster munition rocket.

The truck driver said that on March 13 another rocket landed outside of an ATB supermarket near the military base in Solyani. The driver went there soon after the attack and saw about 20 people on the ground injured and bleeding. They were near the cash machine and appeared to have been waiting in line there. He left the area as medics arrived so did not know how many people were killed, but media reports said nine people died.

Human Rights Watch verified six images posted to Telegram purporting to be of the attack, showing four bodies outside the ATB supermarket on Heroiv Stalinhradu Avenue in the northern part of Solyani close to Pivnichnyy. Human Rights Watch also confirmed on an open-source map that a militarized area containing several bases is about 280 meters to the west of the supermarket.

Several rockets carrying cluster munitions hit a neighborhood in the northern part of the city, where a military installation is located. Another witness said that in the residential areas around the base, he observed five rocket motors that had apparently ejected their payloads over the neighborhood. He shared three photos that he said he took about two hours after the attack. Based on the photographs, Human Rights Watch identified the remnant of the weapon as the rocket motor and tailfin section of the Uragan 9M27K series rocket and a 9N210 submunition.

Given the inherently indiscriminate nature of cluster munitions and their foreseeable effects on civilians, their repeated use in Mykolaiv during these three days of attacks might amount to war crimes.

“All states party to the cluster munitions convention should unequivocally condemn these attacks and any other use of this horrid weapon,” Wille said. “Relevant jurisdictions should investigate and ensure that those responsible one day face justice.”

For more information on cluster munitions and the laws of war, please see below.

Cluster Munitions in Ukraine and the Laws of War

Cluster munitions typically explode in the air and send dozens, even hundreds, of small bomblets over an area the size of a football field. Cluster submunitions often fail to explode on initial impact, leaving duds that act like landmines. Their use in areas with civilians makes an attack indiscriminate in violation of international humanitarian law.

Both Russia and Ukraine stockpile the Smerch and Uragan artillery rockets equipped with a cluster munition warhead. Neither country is among the 110 parties to the international treaty banning cluster munitions.

Notwithstanding the existence of a legitimate military target, an attack is indiscriminate and unlawful if it uses a method or means of combat the effects of which cannot be limited in ways that minimize incidental loss of civilian life, injury to civilians and damage to civilian objects. Cluster munitions cannot be so limited.

Ukrainian authorities are also required under international humanitarian law, as far as feasible, to take “necessary precautions to protect the civilian population, individual civilians and civilian objects under their control against the dangers resulting from military operations.” These precautions include protecting citizens located close to military installations or other potentially legitimate targets, including by moving them out of the area if necessary, and mitigating the anticipated effects of Russian attacks.

Human Rights Watch has documented the use of cluster munitions by Russian forces in multiple towns and cities across Ukraine since February 24, including in Kharkiv, Ukraine’s second largest city. Ukrainian government forces and Russia-backed armed groups used cluster munitions in eastern Ukraine between July 2014 and February 2015, according to independent investigations conducted by Human Rights Watch, the Organization for Security and Co-operation in Europe (OSCE) monitoring mission, and others.