(Beirut) – Journalists should press FIFA and Qatari authorities to address the serious ongoing human rights abuses in Qatar during the 72nd FIFA Congress in Doha on March 31, 2022, Human Rights Watch said today. Ahead of the FIFA Congress, Human Rights Watch is releasing 10 questions that journalists should ask FIFA and Qatari authorities along with information about the issues drawn from the organization’s extensive research on abuses in Qatar. 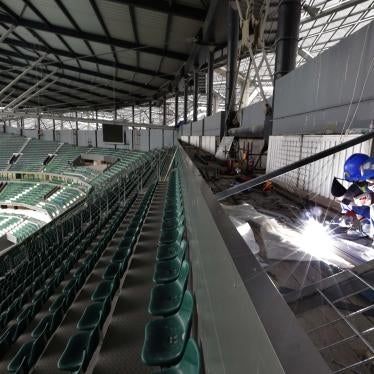 “With the World Cup months away, the excitement for the tournament is palpable, with the Final Draw serving as an important marker,” said Michael Page, deputy Middle East director at Human Rights Watch. “It is critically important to ensure that migrant workers who made the tournament possible and were harmed in the process are not forgotten.”

Several of the questions Human Rights Watch posed focus on persistent abuses against migrant workers, women, and LGBT people. The Qatari authorities have claimed to take action to address these issues, but in reality the much-touted reforms have failed to meaningfully address the problems, Human Rights Watch said.

Other questions touch on emerging rights issues that are important as the country moves from the preparation to the delivery phase of the World Cup. These include the treatment of service workers and the need for FIFA and Qatari authorities to provide long-needed reparations for migrant workers’ loss of lives and livelihoods over the last decade.