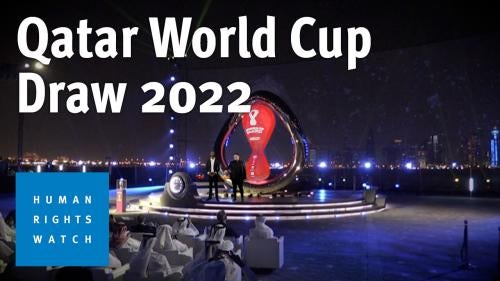 On April 1, the final draw for the 2022 World Cup is set to take place in Qatar, which is hosting the tournament. This is a major event for football fans, who will be hoping for good luck and a favorable draw to help their favorite teams along the path to December’s final match.

Sadly, it was often luck, rather than robust Qatari laws and protections, that has determined the fate of millions of migrant workers, many of whom were drawn to Qatar over the last decade for the allure (and often illusion) of higher wages, only to instead suffer terrible abuses at the hands of unaccountable and unscrupulous employers. The Qatari authorities have created and maintained a system that allows this to continue, without effective remedies for those abused.

Yet, the abusive kafala (labor sponsorship) system has seen migrant workers routinely exploited by employers. These include wage theft, debt bondage from high recruitment fees, and injuries and illness due to employer negligence and working in searing heat. Worst of all, thousands of workers have died in Qatar in the last decade. For their families, who rarely receive any type of explanation or compensation, these losses have taken a massive emotional and financial toll.

If Qatar had fulfilled its pledges for improvement and strictly enforced its recently announced reforms, migrating to Qatar would not have been akin to a lottery with uncertain and often unfavorable outcomes, but rather a reliable pathway out of poverty.

FIFA, which selected Qatar to host the World Cup, also shares the blame for migrants’ suffering. Instead of pressuring Qatari authorities to act, it covered up the government’s complacency.

Under the United Nations Guiding Principles on Business and Human Rights that FIFA adopted in 2016, FIFA has a responsibility to provide reparations for abuses it caused or contributed to –a responsibility that is has yet to meet.

While the World Cup draw on April 1 is something soccer fans around the globe are looking forward to, for thousands of families still mourning, this World Cup will be a painful reminder of their irreparable loss. There is nothing Qatar nor FIFA could ever do to make up for the loss of a loved one, but reparations that provide some financial respite for struggling families is the least they can do.