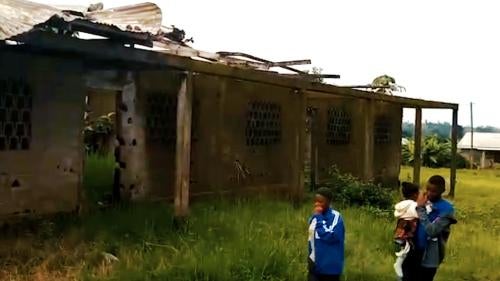 (Nairobi) – Systematic and widespread attacks by armed separatist groups on students, teachers, and schools in Cameroon’s Anglophone regions since 2017 have had a devastating impact on children’s right to education, Human Rights Watch said in a report released today.

The 131-page report, "They Are Destroying Our Future: Armed Separatist Attacks on Students, Teachers, and Schools in Cameroon's Anglophone Regions," documents scores of education-related attacks by armed separatist groups in the English-speaking North-West and South-West regions between March 2017 and November 2021. The groups have killed, beaten, abducted, threatened, and terrorized students and education professionals; harassed and intimidated families into keeping their children out of school; and burned, destroyed, damaged, and looted school buildings.

“Leaders of separatist groups should immediately announce an end to the school boycott and ensure that their fighters end all attacks on schools, teachers, and students," said Ilaria Allegrozzi, senior researcher at Human Rights Watch and author of the report. “These criminal attacks don’t just cause immediate physical and psychological harm to victims; they jeopardize the future of tens of thousands of students.”

Their responses, which in differing ways dispute that their groups are responsible, are on the Human Rights Watch website. Human Rights Watch also sent a letter, with a summary of findings and questions, to Prime Minister Joseph Dion Ngute on September 21. He has yet to respond.

The crisis in the Anglophone regions began in late 2016, when Cameroonian security forces used excessive force against peaceful demonstrators led by teachers and lawyers protesting the perceived marginalization of the country’s minority Anglophone education and legal systems and their assimilation into the Francophone systems. Armed separatist groups, seeking independence for the two English-speaking regions have since emerged and grown, and education soon became a primary battleground.

From early 2017, separatist fighters began to order and enforce a school boycott, citing their opposition to Francophone education imposed by the central government, and as part of a perverse attempt to pressure the government for political recognition. Separatist groups began attacking scores of schools across the Anglophone regions. These attacks, the resulting fear, and the deteriorating security situation have caused school closures, with two out of three schools shut across the Anglophone regions, denying over 700,000 students access to education.

Students and teachers described being beaten, mutilated, threatened, and harassed. “When I go to school, I don’t wear my school uniform,” a female high-school student from Bamenda, North-West region said. “I am afraid of being spotted by the amba [separatist fighters]. My walk to school is about a kilometer, and I never feel safe.”

At least 70 schools have been attacked since 2017, according to reports from United Nations agencies, the World Bank, Cameroonian and international civil society organizations, and media outlets. Human Rights Watch documented in detail 15 attacks during which separatist fighters ordered schools closed and destroyed school infrastructure and property.

Separatist groups have also carried out hundreds of kidnappings. Human Rights Watch documented 268 abductions of students and education professionals since 2017. In two incidents alone, one in 2018 and another in 2019, fighters kidnapped 78 and 170 students, respectively, from North-West region schools.

A high school student, who was kidnapped in Bafia, South-West region, on September 22, 2018, along with four other students on his way to school, said: “They beat me up, they hit me and my friends with sticks and machetes on the soles of our feet, in the arms, and in the back. They cut my right hand. I was bleeding and was seriously injured.”

Separatist fighters have also used school buildings as bases for storing weapons and ammunition as well as holding and torturing hostages. Human Rights Watch documented the use by separatist fighters of at least seven schools across the two Anglophone regions. This can lead to the damage or destruction of vital education infrastructure.

The attacks on education have had far-reaching consequences for students and teachers, including displacement, trauma and mental health issues, and school withdrawals.

In 2018, Cameroon endorsed the Safe Schools Declaration, a political agreement committing countries to prevent and respond to attacks on education. But the attacks have continued, largely unabated, with an almost total absence of accountability. As of November, Human Rights Watch is aware of only 23 arrests, including 12 people prosecuted in a severely unfair trial before a military tribunal for the attack against the Mother Francisca International Bilingual Academy in Kumba in October 2020.

Cameroon’s regional and international partners should urge Cameroonian authorities to ensure that the police and the judiciary can effectively investigate and prosecute attacks on education and offer to provide monitor and targeted support to strengthen their forensic and civilian trial capacities, Human Rights Watch said.

As a party to African and international human rights law treaties, Cameroon has obligations to protect the rights to life, education, and personal security for students, teachers, academics, and all education staff. This includes an obligation to take measures to prevent separatist fighters from interfering with these constitutionally and internationally protected rights and hold those responsible for attacks to account.

“Cameroonian authorities should impartially investigate all education-related attacks, prosecute those responsible in fair trials, and provide timely support to victims,” Allegrozzi said. “As the future of children in the Anglophone regions hangs in the balance, the authorities should live up to their responsibility to ensure children’s safe access to education and protection from harm.”