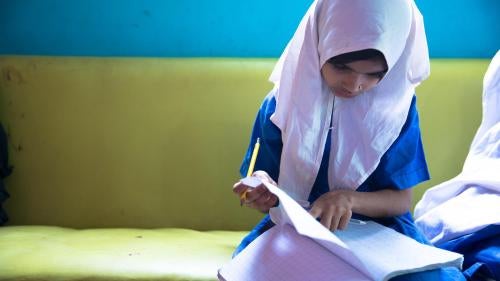 (London) – The Pakistan government is failing to educate a huge proportion of the country’s girls, Human Rights Watch said in a report released today.

The 111-page report, “‘Shall I Feed My Daughter, or Educate Her?’: Barriers to Girls’ Education in Pakistan,” concludes that many girls simply have no access to education, including because of a shortage of government schools – especially for girls. Nearly 22.5 million of Pakistan’s children – in a country with a population of just over 200 million – are out of school, the majority of them girls. Thirty-two percent of primary school age girls are out of school in Pakistan, compared with 21 percent of boys. By ninth grade, only 13 percent of girls are still in school.

“The Pakistan government’s failure to educate children is having a devastating impact on millions of girls,” said Liesl Gerntholtz, women’s rights director at Human Rights Watch. “Many of the girls we interviewed are desperate to study, but instead are growing up without the education that would help them have options for their future.”

Human Rights Watch interviewed 209 people for the report – most of them with girls who never attended school or were unable to complete their education, and their families – in all four of Pakistan’s provinces: Balochistan, Khyber Pakhtunkhwa, Punjab, and Sindh. Human Rights Watch also interviewed parents, educators, experts, and activists, and visited schools. 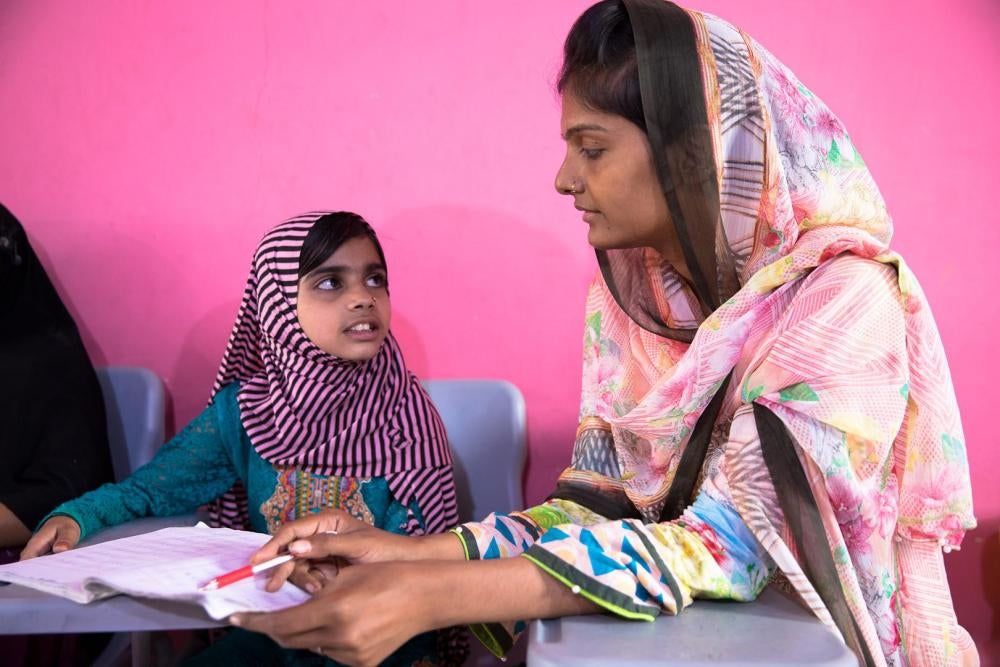 Shazia, a teacher who grew up playing in Lyari’s streets, has long worried about the swarms of kids there, some getting in trouble, very few attending school. She wanted them to have a better future, so she quit her paying teaching job and founded the Lyari school – where neighborhood children can study for free.&#13;

In addition to these factors within the education system, girls are also blocked from attending school by external factors including child labor, gender discrimination, child marriage, sexual harassment, insecurity, and attacks on education.

The Pakistan government has consistently invested far less in education than is recommended by international standards. As of 2017, Pakistan was spending less than 2.8 percent of its gross domestic product on education – far below the recommended 4 to 6 percent – leaving the government’s education system severely under-funded. Government schools are in such short supply that even in Pakistan’s major cities, many children cannot reach a school on foot safely in a reasonable amount of time. The situation is far worse in rural areas. And there are many more schools for boys than for girls.

Aisha, around age 30, lives with her husband and their six children in an area of Peshawar where the nearest government school for boys, offering nursery school through 10th grade, is less than a five-minute walk away. The nearest government school for girls is a 30-minute walk and goes only through fifth grade. Aisha’s daughter left school when she was 9 because of her parents’ concerns about her safety walking to school.

“Even parents who are not educated themselves understand that their daughters’ future depends on them going to school, but the government is abandoning these families,” Gerntholtz said. “Pakistan’s future depends on educating its children, including its girls.”

An “upward bottleneck” exists as children, especially girls, get older. Secondary schools are in shorter supply than primary schools, and colleges have even less capacity, especially for girls. Many girls who complete the top level at one school cannot access a school where they could go on to the next level. In the absence of an adequate system of government schools, there has been a massive growth in the number of private schools, many of them low-cost. But poor families often cannot afford any tuition fees and the government’s near-total failure to regulate and monitor these schools means that many are of poor quality.

Newly-elected Prime Minister Imran Khan’s political party’s manifesto promises major reforms to the education system, including for girls’ education. “We will prioritise establishment and upgradation of girls’ schools and provide stipends to girls and women for continuing their education,” the manifesto says. It pledges to “put in place the most ambitious education agenda in Pakistan’s history, spanning reform of primary, secondary, tertiary, vocational, and special education.”

“The government recognizes that education reform is desperately needed and promises to make this a priority, especially for girls – a positive step,” Gerntholtz said. “We hope that our findings will help the government to diagnose the problems and identify solutions that will give every Pakistani girl a bright future.”

Lack of investment and shortage of government schools

“I could send them if there was a government school.”
—Akifah, 28, mother of three children, ages 10, 8, and 7. The family moved from a village near Multan to Karachi three years earlier, looking for work, and had no choice but to settle in an area where there were only private schools the family cannot afford, and no government schools within reach.

“My parents said, ‘If you are interested enough you can walk there.’ Whoever wanted to, went. I found it too far. The path is lonely and isolated and there have been cases of two or three kidnappings in that area… But then I realized I needed to study so I convinced my parents and I got friends to go so we walked to school together.”
—Asifa, 20, in Punjab, who delayed attending school until she was 9 or 10 because it was a 45-minute walk from her village. The school only went through eighth grade, so after that she went to live with her sister in a town where grades nine and ten were available.

“The state has never taken education seriously—proper resources have never been allocated in any state. The problem is the priories of government—education is not a priority and they don’t allocate the budget.”
—Head of a nongovernmental organization working on women’s rights, Punjab.

“[E]very mother wants their child to be educated, but there is not a state system to deliver the services.”
—Head of a community-based organization, Karachi.

Gender discrimination in the government’s provision of schools

“If you have 10 schools for boys, you have 5 for girls.”
—An education expert from Khyber Pakhtunkhwa.

Poverty and the cost of education

“The government doesn’t help the poor. We can’t educate our children, and we can’t feed ourselves.”
—Rukhsana, 30, mother of three out-of-school children, whose husband is rarely able to work due to illness, who was unable to pay for school fees and related costs, Karachi.

“The school may be free, but there are always demands for money for something or the other. Copies, stationery, every day there is a new expense. A school bag alone costs 500 rupees [US$4.76]…. Every day, every day, it’s something.”
—Zarifah, a mother of five out-of-school children, Balochistan.

“I wanted my daughters to get educated, but I couldn’t because of poverty. My husband’s salary is 12,000 rupees [$114] a month. At the end of the month, we are always out [of money] and wonder what to do – it is all gone. I want a school for girls who belong to poor families.”

—Halima, 38, in Karachi, mother of five daughters, ages 13 to 19, none of whom studied more than a year or two. Her husband works in a chewing gum factory.

“A lot of times the teacher showed up late or he would not show up at all. We would just go and sit and then come home.”
—Hakimah, 17, Karachi, describing her primary school.

“For the last five years, everyone has to pay [to obtain a government teaching position]. It’s worth it just for the salary – it’s an investment. This has an impact on the quality of the teaching – there’s no teaching.”
—Director of a community-based organization, Karachi.

“Once or twice a year they [inspectors] come, unannounced. They come for a half hour. They want tea and to be entertained. You have to please them or they will say that your school is not good. Once I made the inspector wait and he got mad and left and said, ‘I will write a bad report.’ My colleague went to his house and gave him 25,000 rupees [$238] and we got a good report.”
—Private school principal, describing government monitoring of the school, Punjab.