(Washington, DC) – The administration of United States President Joe Biden should take concrete action to ensure that the country’s maternal health crisis, dominated by racial inequities, is a central focus of US domestic climate policy, a coalition of more than 50 organizations said today in a letter to President Biden.

Government agencies should use Biden’s directives to include the risk to maternal health in their assessments of risks from the climate crisis and plan their policies and actions through a reproductive justice lens that centers on racial and economic disparities, the groups said. The organizations work in reproductive justice, maternal and child health, environmental justice, climate justice, and human rights.

“President Biden has encouraged many of us by including racial and environmental justice when talking about the climate crisis in the US,” said Kelly Davis, vice president of global birth equity and innovation for the National Birth Equity Collaborative. “But pregnancy creates additional vulnerability to heat and natural disasters, and low-income, Black, Indigenous, and other women of color are especially at risk. US climate policy should specifically address these needs.” 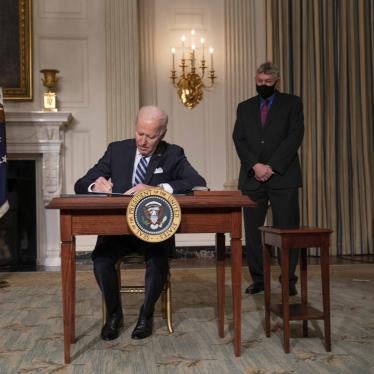 President Biden signed an Executive Order on Tackling the Climate Crisis at Home and Abroad in late January 2021, instructing US government agencies to reassess how to build resilience to the climate crisis and to calculate the financial and other costs of climate change to people and their communities.

The executive order requires the Department of Health and Human Services to establish new bodies to address the climate crisis, including an Office of Climate Change and Health Equity and an Interagency Working Group to Decrease Risk of Climate Change to Children, the Elderly, People with Disabilities, and the Vulnerable. The executive order also established the White House Environmental Justice Advisory Council, to bring greater visibility across the US federal government for environmental justice issues, including for climate change mitigation, resilience, and disaster management.

Biden is planning to announce a new US 2030 emissions target under the Paris Agreement ahead of an international climate summit hosted by the US on April 22 and 23.

Maternal mortality and morbidity, premature birth rates, and other adverse birth outcomes in the US are among the worst in the industrialized world and are continuing to trend worse. Premature birth rates and rates of severe illness during pregnancy are twice as high for Black women as for white women. Ending racial disparities by identifying and addressing factors that contribute to systemic racism is necessary to address the maternal health crisis, the groups said.

A White House proclamation issued on April 13 said that the Biden-Harris administration is committed to “addressing these unacceptable disparities, and to building a health care system that delivers equity and dignity to Black, Indigenous, and other women and girls of color.”

The climate crisis threatens to make efforts to improve US maternal health more difficult and to exacerbate economic and racial inequities in public health. Studies and reports have shown links between exposure to heat, wildfire smoke, flooding, hurricanes, and fossil fuel extraction, and poor maternal health and birth outcomes.

These include premature birth and low birth weight, both linked with higher rates of infant deaths and lifelong health consequences. Significant changes in their hormonal, respiratory, circulatory, and other systems during pregnancy put pregnant people at greater risk of climate associated or exacerbated illness, for example from heat (see below for resources).

New federal offices and advisory bodies should include people with maternal health expertise, and consult with maternal and child health groups, reproductive justice advocates, and frontline birth workers operating in communities hit hardest by hurricanes, floods, heat, wildfire, and other events worsened by the climate crisis. Human Rights Watch research has found that pregnancy health has been largely omitted from heat awareness efforts.

The groups said that President Biden should address climate health impacts, gender equality, racial and economic equity considerations, and human rights in the upcoming new US Nationally Determined Contribution (NDC) that governments are due to submit under the Paris Agreement. The document should specify the domestic maternal health crisis as an area of concern and action.

The administration should also appoint a national gender and climate change lead to support the integration of gender considerations into all aspects of White House climate change policymaking and coordination.

The Universal Declaration of Human Rights and the International Covenant on Economic, Social and Cultural Rights (ICESCR) provide for the right to health. The ICESCR obligates governments to respond to foreseeable threats to public health, and to show they are taking steps toward improving maternal health. The International Convention on the Elimination of Racial Discrimination obligates the US to act affirmatively to eliminate policies and practices with discriminatory impacts even if they appear to be neutral. Governments also have a human rights obligation to address climate change, including its impact on the rights of marginalized communities.

“Independent and government research and reports increasingly acknowledge the dangers of climate change in the US to maternal health, but what to do about it is missing,” said Skye Wheeler, senior women’s rights researcher at Human Rights Watch. “We need more public health information for people who are pregnant and their families, more services to protect them, and to include maternal health experts in addressing the growing problems of heat, hurricanes, wildfire, and flooding.”

For additional information and resources on climate impacts and maternal health, please see below.

Extreme Heat Exposure
Every year, more people die in the US from heat than from any other weather-related cause, but official heat deaths are only a small proportion of deaths linked to heat. Increases in heat are linked to increased deaths even at temperatures below heat emergency thresholds, and heat can worsen illnesses, or example cardiovascular and respiratory conditions. Heat stress threatens health during pregnancy, and fetal health exposure to high temperatures is linked in many studies to higher rates of premature birth as well as other adverse birth outcomes.

The National Institute for Occupational Safety and Health, part of the US Centers for Disease Control and Prevention, notes that people are more vulnerable to heat stress during pregnancy, saying that, “(i)f you are pregnant, you are more likely to get heat exhaustion or heat stroke sooner than a nonpregnant worker.”

A recent survey of studies warned that there may be a connection between hot summer weather and increased rates of gestational diabetes, a common but serious pregnancy condition. A 2019 study found “prenatal exposure to extreme heat increases the risk of maternal hospitalization during pregnancy, and that this effect is greater for Black than for white mothers,” and that “(a)t childbirth, heat-exposed mothers are more likely to have hypertension and have longer hospital stays.” A 2021 study in New York state found “immediate and prolonged effect of extreme heat exposure on pregnancy complications … stronger in African Americans and counties with lower socioeconomic position.”

Many studies show that extreme heat exposure is linked to premature birth and others also link exposure to heat to low birth weight, birth defects, and stillbirth. Several reviews of studies warn that more needs to be done to address these findings, especially given predictions of hotter days and nights as well as acute heat wave periods.

The nongovernmental organization A Better Balance has documented that pregnant workers have been unable to access simple accommodations like cooler work or extra breaks to drink water, and have instead have in many cases been forced to choose between wages they need and their health.

Studies, for example in 2019 and in 2020, and joint efforts by data experts and media outlets such as the National Public Radio have found that lower-income areas of many US cities, often communities of color, are hotter than wealthier, often whiter parts of cities.

Human Rights Watch has found that health during pregnancy has been largely omitted from heat awareness efforts. For more on studies and context on why heat is a reproductive justice concern please see this fact sheet.

Hurricanes and Flooding
The year 2020 was record-breaking for north Atlantic hurricane activity. Scientists predict that the intensity and levels of rainfall for the region will continue to worsen as the earth continues to warm, potentially leading to more property damage, loss of livelihoods, and displacement. A 2020 study of 20 million births in the eastern US found an association between exposure to hurricanes and higher rates of preterm birth. Another study, also of millions of US births, suggested that “exposure to a hurricane during pregnancy increases the probability of complications of labor and delivery and problems for the newborn.”

Hurricane Katrina, which devastated New Orleans and neighboring areas in 2005, had many negative impacts on women and girls’ health including, according to one study, low birth weight for the babies of pregnant women who had the greatest exposure, for example those who experienced flooding directly or had to escape through water.

Researchers found that maternal stress because of Hurricane Andrew in 1992 may have been linked to dysfunctional labor, with a 20 percent rise in C-section deliveries compared with statistically matched comparison groups. Human Rights Watch research found that in the aftermath of Hurricane Maria in Puerto Rico in 2017, pregnant women struggled to find care, including emergency obstetric care, and breastfeeding support systems were dysfunctional.

A study found that the 2009 Red River floods in North Dakota were followed by “an increase in medical risks, low birth weight, and preterm delivery among women giving birth in North Dakota.”

Wildfires
As the climate crisis worsens, scientists expect wildfires to become both more frequent and more severe, especially in the Western US. Paired with continued development in areas vulnerable to wildfire, more of the US population will most likely be affected by the health impacts of wildfires, facing increasing amounts of pollution, dust, and smoke in the air.

Specific risks associated with wildfires during pregnancy include reduced access to health care during evacuations, vulnerability to PTSD-like symptoms, and complications related to exposure to smoke. Multiple studies suggest a link between exposure to particulate matter in smoke and pregnancy complications, such as low birth rate and preterm birth. And without a sufficient air filtration system, particulate matter can remain indoors well after wildfires end, perpetuating the risk of harm from exposure. Scientists have also noted the impact of stress caused by the fires on pregnancy, and several studies are underway to assess the impact of long-term stress.

The Environmental Protection Agency includes pregnant people as a population vulnerable to wildfire, including in a guide for public health officials, and the CDC’s climate program noted a number of new studies indicating maternal health concerns in a recent report on air filtration as a public health intervention.