For years, Human Rights Watch has been documenting and exposing the brutal crackdown on dissent by the Nicolás Maduro government, the humanitarian emergency in Venezuela, and the resulting exodus of more than 5.6 million people since 2014. Our research and advocacy, in partnership with Venezuelan human rights groups and medical and public health experts from Johns Hopkins University, has contributed to giving greater international visibility to Venezuela’s spiraling crisis and to press for accountability for egregious crimes, greater access for humanitarian aid into the country, and improved conditions for Venezuelans forced to flee their country. Key examples of impact include the following:

Human Rights Watch was the first major human rights organization to expose violations of the right to food and health, which manifested in widespread hunger and medical shortages in Venezuela. Our reporting started in 2015, and in addition to documenting rising mortality rates and food and medicine shortages in the country, it also showed that Venezuelan authorities were largely to blame while publicly minimizing the crisis, suppressing critical information about it, harassing those who spoke out about it, and doing far too little to alleviate it.

As conditions continued to worsen, and so that we could better assess the real extent that the Maduro government’s policies were having on Venezuelans’ rights, and to circumvent the government's deliberate opacity on these issues, we partnered with medical and public health experts at Johns Hopkins University. We released our first joint report in 2019, which documented a devastating food and health emergency and a collapsed health system that threatened people across the country. Along with rising food insecurity, we documented increased levels of maternal and infant mortality; the spread of vaccine-preventable diseases, such as measles and diphtheria; and increases in numbers of infectious diseases such as malaria and tuberculosis. 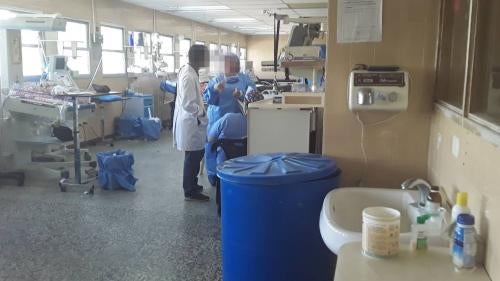 The Covid-19 pandemic has added a new level of urgency to the crisis. In May 2020, together with Johns Hopkins University experts, we published a second joint publication documenting that the reported number of Covid-19 confirmed cases was almost certainly much higher than reported by authorities, given the limited availability of reliable testing, limited transparency, and the harassment of medical professionals and journalists who report on this issue. Overcrowding in low-income areas and prisons, as well as limited access to water in hospitals and homes, increases the chances that the virus that causes Covid-19 would spread within the country. As of June 23, 2021, Venezuelan authorities had reported 263,372 positive cases and 2,989 deaths.

In October 2020, we released a new report with Johns Hopkins doctors and health experts documenting mistreatment of over 100,000 Venezuelans who returned to the country because the pandemic curbed their capacity to earn a living abroad. It documented overcrowded and unsanitary quarantine centers for those returning, with little access to food, water, or medical care, as well as the Maduro government’s failure to require adequate social distancing or provide sanitation measures. Some who protested the conditions were threatened with arrest. And due to Covid-19 testing delays, many people were quarantined for weeks longer than the 14 days the World Health Organization recommends.

The Brutal Crackdown on Dissent

The Maduro government has responded to public outrage over its abuses with brute force and authoritarian repression. Human Rights Watch has worked closely with Venezuelan human rights groups to document and expose the crackdown, including through joint publications.

We visited Venezuela a month after massive anti-government protests broke out in February 2014 to investigate allegations of abuses against demonstrators, interviewing victims, their families, eyewitnesses, medical professionals, journalists, and human rights defenders. We found security forces had used unlawful force, including shooting and severely beating unarmed individuals. Authorities detained thousands of protesters and bystanders, prosecuting many in military courts. While in detention, many were subjected to physical and psychological abuse that in some cases amounted to torture. These were not isolated incidents by rogue agents, but rather part of a systematic pattern by Venezuelan security forces.

In 2017, as Venezuela’s crisis deepened, tens of thousands of people took to the streets initially to protest the government’s attempts to usurp the country’s legislative branch. Our research once again found security forces and armed pro-government groups attacked protesters, causing dozens of deaths and hundreds of injuries, and repeated the pattern of arbitrary arrests and abuse against detainees.

In addition to the repression on the streets, Human Rights Watch has documented the arbitrary arrests and torture of suspected “coup plotters” and their family members, extrajudicial killings by a special police force, egregious abuses by armed groups and Venezuelan security forces in the Venezuela-Colombia border region, abuses in Venezuela’s gold mining industry, attacks on free speech, and harassment of humanitarian actors and human rights defenders. The Covid-19 emergency measures have been used as a pretext by Venezuelan authorities to intensify a police state and control of the population.

The Massive Exodus of Venezuelans 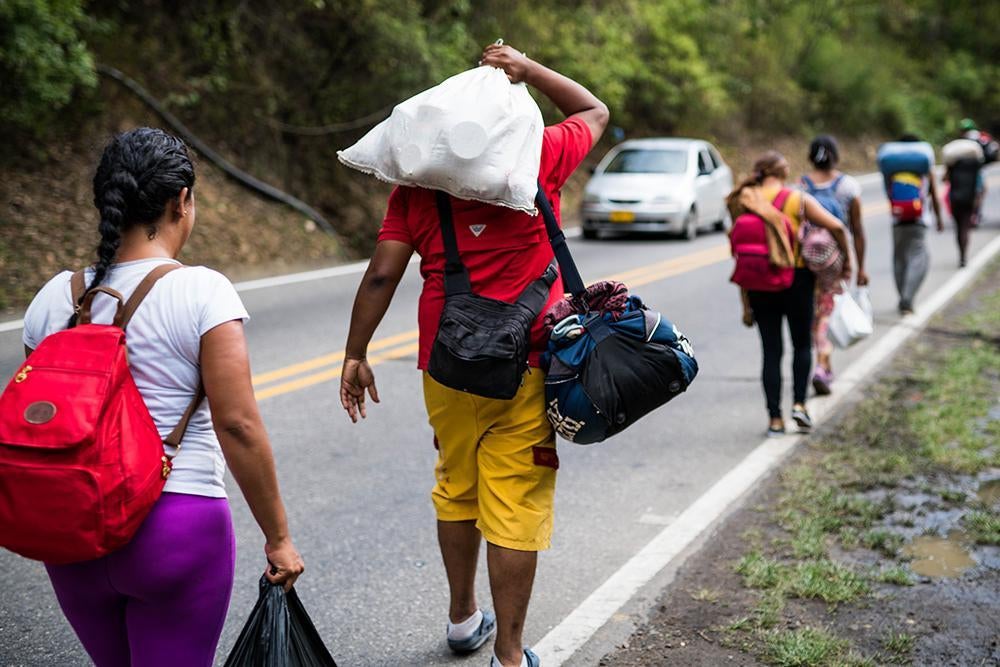 As Venezuela’s humanitarian crisis worsened, Human Rights Watch in 2018 reported on a mass exodus of more than 2.3 million Venezuelans to neighboring countries. Today, more than 5.6 million have left the country, making it the largest migration crisis of its kind in Latin America’s recent history. While many neighboring governments welcomed the fleeing Venezuelans, Human Rights Watch found that a lack of a coordinated, comprehensive regional strategy left many people stranded in poor conditions or at borders without ability to receive necessary refugee or other legal protections. In some countries, they are being expelled or facing incidents of xenophobia and difficulties in obtaining health care, education, or legal status that would allow them to work.

Our continued reporting on the situation of Venezuelans abroad has included exposing the arbitrary deportation of Venezuelan children and asylum seekers, abuses suffered by Venezuelans in Colombian border areas where armed groups exercise control over the territory, poor detention conditions in  Caribbean countries including Trinidad & Tobago, Aruba and Curacao, and the difficult situation that Venezuelans stuck in Northern Mexico, waiting for their asylum claims in the US to be heard, are facing. As early as 2018, we called for a region-wide temporary protection regime that would grant all Venezuelans legal status, and in March 2019 we began advocating for Temporary Protected Status (TPS) in the United States.

The goal of all our research is improving the lives of people subjected to human rights violations and abuse, and a first step is getting the attention of people with power to exert influence for positive change. From the start of this work, we have used our findings to show the world what is happening in Venezuela, and press those able to help to do so.

Our reporting since 2014 has been widely covered in the media, and our research featured in international media reporting on Venezuela. We have shared our findings and held high-level meetings with key decision makers – from country presidents to UN actors to influential policymakers. In 2018, we launched a high-profile online campaign called #TodosConVenezuela (Stand with Venezuela), which engaged the public in Latin America to help pressure their leaders to tell the Maduro government “enough is enough.”

A week after we released our first joint report with Johns Hopkins University in April 2019, the UN Security Council invited us to present our findings in its first ever formal meeting on the humanitarian situation in Venezuela. Together with Venezuelan groups, we had been pushing for a large-scale, UN-led response to Venezuela’s humanitarian emergency that would allow aid to reach the people apolitically. The day of that meeting, UN Secretary General António Guterres tweeted for the first time that 7 million Venezuelans needed humanitarian assistance. Since then, the UN has appointed a humanitarian coordinator in Venezuela, launched a Humanitarian Response Plan, and is seeking increased financial support. In April 2021, the World Food Program brokered an agreement with the Maduro government, after a year of negotiations, to deploy aid in Venezuela that would supply food for young children in need. Although the needs of people in Venezuela still largely exceed the aid that is reaching the country, and humanitarian actors continue to face enormous risks to carry out their work, more aid is reaching Venezuela than ever before.

In the short term, there is no hope that Venezuelan institutions can provide remedies for past and ongoing human rights abuses. Because impunity reigns and the judiciary is a puppet of the executive branch, international avenues are the only hope for justice for Venezuela. This is why, in addition to exposing the lack of judicial independence in the country since 2004, Human Rights Watch advocated at the United Nations to create the first ever UN Fact-Finding Mission on Venezuela, and subsequently shared our findings with both the Fact-Finding Mission and other key international actors, including the Office of the Prosecutor at the International Criminal Court (ICC). Both bodies have found information suggesting crimes against humanity have been committed. The UN mission found “reasonable grounds” to implicate Nicolás Maduro and his interior and defense ministers. The ICC prosecutor had anticipated determining whether there is a reasonable basis to proceed with a formal investigation by mid-June, but the announcement got delayed after Venezuelan authorities presented a legal challenge. Meanwhile, the European Union, Canada, the United States, and several Latin American countries have imposed targeted sanctions – including freezing bank accounts and cancelling visas – against high level civilian, military, and judicial officials implicated in the abuses.

We have presented our findings on the situation of Venezuelans abroad to key government officials, including members of the Quito Process, a coalition of Latin American governments shaping a regional response to the Venezuelan crisis, to push for greater protections of those who were forced to flee and rebuild their lives abroad. In 2019, Brazil granted refugee status to 21,000 Venezuelans in a single day. It based its decision on a technical report on the situation in Venezuela that cited Human Rights Watch’s work 30 times. While there have been some setbacks for Venezuelans who fled to other Latin American countries and several challenges remain, in February 2021, Colombia announced temporary protection that could benefit hundreds of thousands of Venezuelans living there. This is a very important step by the country that is currently hosting the largest number of Venezuelans abroad. In March 2021, the Biden administration announced it would grant temporary protected status to Venezuelans currently in the United States, citing Human Rights Watch research. These measures must be fully and properly implemented to effectively protect the rights of Venezuelans.

The situation on the ground in Venezuela continues to be dire, with Covid-19 hitting the country while it continues to be mired in a humanitarian emergency, and abusive authorities clinging to power through repression. Many Venezuelans who fled did not choose to leave – they feel expelled from their own country and are unwilling or unable to return until circumstances in Venezuela improve. However, international exposure of the depredations and abuses of the Maduro government has left Venezuelan authorities as isolated as they have ever been, which is slowly forcing them to grant concessions. The pressure is working, and it should continue to ensure that these incipient steps turn into effective measures that will help restore fundamental rights and the rule of law in Venezuela.