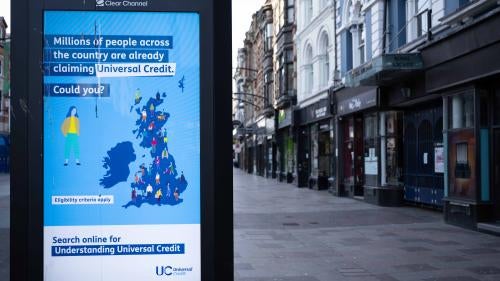 (London) – The United Kingdom government’s rigid insistence on automating Universal Credit threatens the rights of people most at risk of poverty, Human Rights Watch said in a report released today. A comprehensive redesign of how the government calculates the social security benefit is urgently needed to restore people’s rights to a decent standard of living, particularly as they face severe income loss and other economic shocks caused by the Covid-19 pandemic.

The 68-page report, “Automated Hardship: How the Tech-Driven Overhaul of the UK’s Benefits System Worsens Poverty,” details how a poorly designed algorithm is causing people to go hungry, fall into debt, and experience psychological distress. Human Rights Watch also found that the government is failing to address the socioeconomic inequalities that prevent people from being able to apply for and manage their benefit online.

“The government has put a flawed algorithm in charge of deciding how much money to give people to pay rent and feed their families,” said Amos Toh, senior artificial intelligence and human rights researcher at Human Rights Watch. “The government’s bid to automate the benefits system – no matter the human cost – is pushing people to the brink of poverty.”

In 2013, the government began rolling out Universal Credit, a major revamp of the country’s social security system, ostensibly to simplify access to benefits, cut administrative costs, and “improve financial work incentives.” Universal Credit, which combines six social security benefits into one monthly lump sum, requires most people to apply for and manage the benefit online.

Human Rights Watch has found that the means-testing algorithm at the heart of Universal Credit is flawed. The algorithm is supposed to adjust how much people are entitled to each month based on changes in their earnings. But the data the government uses to measure these changes only reflects the wages people receive within a calendar month, and ignores how frequently people are paid. If people receive multiple paychecks in one month – common among people in irregular or low-paid jobs – this can cause the algorithm to overestimate earnings and drastically shrink their payment.

Interview: Don’t Fear the Machines, Fear the People Running Them

What Happens When You Take The ‘Human’ Out Of Human Rights? 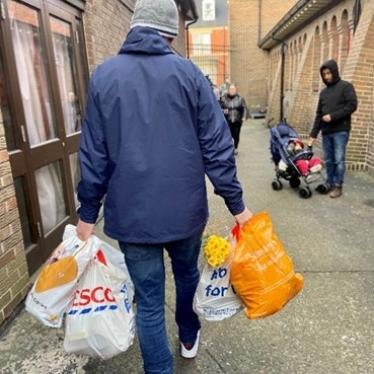 This design flaw drove a 31-year-old father of three into dire financial straits. “It’s a big hole I am in at the minute,” he said. His October 2019 benefit was reduced by nearly £600, and he had to borrow money from his parents and rely on food donations. “I’ve worked all my life and I am resorting to using the food bank today because of benefits that I am receiving. It’s not really a benefit is it, if I’m having to use this service?”

Multiple ways to fix the flawed algorithm have been proposed, including moving to shorter periods of income assessment, or using averaged earnings over longer periods to smooth out fluctuations in people’s payments. But the government has not acted.

In June, after a protracted legal fight, a UK appeal court ordered the government to rectify the effect the flawed algorithm has on people who receive a regular monthly salary. The Department for Work and Pensions, which is responsible for social security, accepted the ruling but is still figuring out how to carry it out. In any case, the ruling does not address the plight of people who are paid weekly, fortnightly, or every four weeks.

People are also being forced to wait five weeks for their first Universal Credit payment. While they wait, they are borrowing money to cope and skimping on their basic needs. Under the previous system, people generally received their first payment within two weeks.

The government has increased funding to some charities to help guide people through the online application, but demand for support outstrips supply, and a decade of austerity-motivated cuts to local authority budgets has depleted digital services at libraries and community centers.

The economic recession triggered by Covid-19, the UK’s biggest since the Second World War, underscores the importance of a social security system that helps people stay afloat. The Department for Work and Pensions estimates that a record 3.4 million people applied for Universal Credit between March and June, when the pandemic first hit. Although the government made temporary adjustments to ease access to the benefit, it has allowed some of these to lapse even as the crisis continues.

While the government evaluates proposals to fix the algorithm, it should implement urgently needed measures such as one-off grants to help people during their five-week wait, Human Rights Watch said.

The automation of Universal Credit is part of a global trend to overhaul aging welfare systems with data-driven technologies. But the former United Nations’ leading expert on poverty and human rights, Philip Alston, fears that governments are automating their key welfare functions without sufficient transparency, due process, and accountability. Human Rights Watch has previously examined how the automation of welfare programs is harming people’s rights in Australia, India, the Netherlands, Sweden, and the United States.

People should be able to understand how automated benefits systems are making decisions about them, provide input, and challenge the algorithm when it harms their rights. But many governments are reluctant to bring these systems under meaningful human control because they perceive these safeguards as cumbersome and expensive.

The UK government’s international human rights obligations require it to secure everyone’s rights to social security and a decent standard of living. However, the UK has failed to put these rights into domestic law and to give those whose rights are violated an effective remedy.

“Making sure the benefits system protects people’s rights is ultimately a job for humans, not an algorithm,” Toh said. “Benefits are designed to help people, not kick them when they’re down. A human-centered approach to benefits automation will ensure the UK government is helping the people who need it most.”