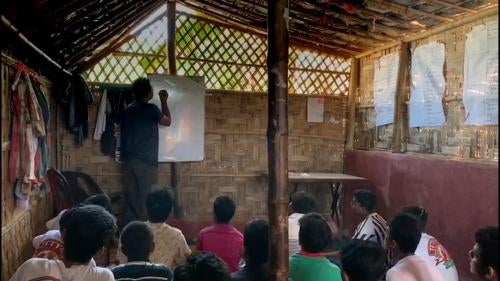 Bangladesh will allow 10,000 ethnic Rohingya refugee children to get a formal school curriculum for the first time after the government approved a “pilot” education program.

It’s a step in the right direction, but also an urgent reminder of how far there is to go until all refugee children can get a real education.

There are nearly 400,000 school-age Rohingya children in Bangladesh’s refugee camps. Most fled the Myanmar military’s brutal campaign of ethnic cleansing launched in August 2017.

After more than two years in exile, the children will finally be taught a version of the Myanmar curriculum under the auspices of humanitarian agencies in the refugee camps.

Denial of Education for Rohingya Refugee Children in Bangladesh

Until now, Bangladesh only approved an informal learning program, designed by humanitarian groups and taught in temporary camp “learning centers,” at the beginning primary level. This left Rohingya children without access to secondary-level education – informal or otherwise.

The pilot will use the unofficial schools set up by Rohingya refugee teachers in the camps, which until now have been ignored.

These schools already teach the Myanmar curriculum to about 10,000 children, but because the Bangladeshi government had not approved it, donors and humanitarian agencies had not previously helped the unofficial schools and some closed due to lack of support. Others were shuttered on the orders of Bangladeshi camp officials.

Education for Rohingya still needs to be dramatically scaled-up and accredited. The pilot will only reach 1 in every 40 Rohingya children by the end of 2020. It will also stop at class 9, while secondary education in Myanmar continues to class 12.

Neither Bangladesh nor Myanmar has accredited the pilot program. In fact, no Rohingya child in Bangladesh can access any accredited education. Myanmar should step up and offer Bangladesh its full support for the use of its curriculum, including accreditation.

Children’s education need not be held hostage if Myanmar fails to help. Bangladesh could follow the example of Turkey, which encouraged Syrian refugee teachers to set up schools and accredited a version of the Syrian curriculum, all without support from Syria.

Education can be lifesaving. Children denied education are more vulnerable to trafficking and exploitation, and girls are at increased risk of child marriage and sexual violence.

Rohingya refugees have been clear that they want to return home, in safety and dignity, and that their children need an education to help them lead fulfilling, successful lives. Bangladesh’s pilot is a good first step, but all Rohingya children are entitled to a quality education. They cannot afford to wait.