According to Russian authorities, men in Russia are more likely to suffer from discrimination in domestic violence cases – an outrageous claim that flies in the face of the facts.

The dubious statement is part of Russia’s official response to questions posed by the European Court of Human Rights relating to four domestic violence cases filed against Russia. One of the four women who sought redress from the European court is Margarita Gracheva, whose husband chopped off her hands with an ax. As is often the case in Russia, weeks before this happened, a police officer dismissed Gracheva’s complaint about her husband’s routine threats as a private matter.

In their submission, Russia said men are more likely to be discriminated against because there are fewer male victims and because men “aren’t expected to seek protection,” especially if the perpetrator is female. The authorities also had the audacity to claim the applicants are “undermining” efforts to address domestic violence. 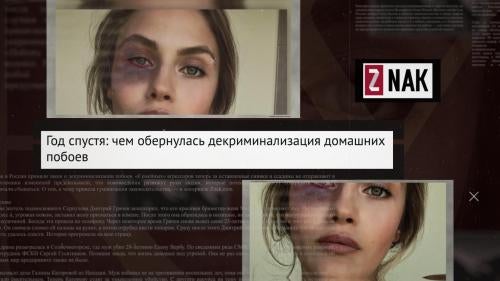 But Russia systematically fails to protect domestic violence victims. There’s no separate law on domestic violence, not even a legal definition of it. There are no protection orders that could offer survivors immediate and longer-term protection. Shelter spaces are severely limited. In February 2017, amendments decriminalizing first offenses of battery within the family were rammed through the Russian parliament by conservatives claiming this would strengthen families. In reality, they made the situation worse by further weakening protections.

The Russian government needs to be urgently reminded of three simple facts.

Domestic violence is neither a “family matter” nor a “traditional value.” It endangers lives, causes psychological harm that spans generations and demands a robust legal response. Secondly, it’s the state’s direct responsibility to protect victims of domestic violence. And finally, domestic violence is universally underreported – even more so in Russia due to social stigma and distrust of police. If anything, the lack of reliable statistics on domestic violence in Russia speaks to the gravity of the problem – not the other way around.