The burned-out mosques in Sittwe, the capital of the Rakhine state in western Burma, loom as silent reminders of an atrocity, hiding behind overgrown bushes and cement walls amid the daily port city bustle. But approach these mosques with a camera, and the policeman on guard 24 hours a day scuttles out of a booth like a blue-helmeted crab, waving the curious away. The ethnic Rohingya and Kaman Muslims who used to pray there are nowhere to be seen; they are confined behind barbed wire and checkpoints in internally displaced camps outside of town. Or they have fled with their families to Bangladesh.


During four days in June 2012, mobs of ethnic Rakhine militants torched houses and attacked Muslim families with swords and other weapons as the police and military stood by, prompting an exodus of thousands of Rohingya out of Sittwe. No one was ever held accountable for the ethnic cleansing and crimes against humanity that Human Rights Watch found were perpetrated against the Rohingya in Sittwe and other parts of Rakhine State in June and October 2012.

Five years later, in northern Rakhine State townships of Maungdaw and Buthidaung, attacks on the Rohingya have happened again. After an assault on border police posts by a group of Rohingya militants killed nine officials on Oct. 9, 2016, the Burmese army reacted with fury against Rohingya villagers. Military and police ejected United Nations agencies and international humanitarian organizations working in a wide swath of territory, and prevented media and human rights monitors from observing what the army euphemistically called a “clearance operation,” ostensibly to find the attackers and recover weapons seized during the raid.

With independent observers barred, the army launched a literal scorched earth campaign, targeting residents in military sweeps that laid waste to villages throughout the area. Human Rights Watch’s analysis of satellite imagery revealed that security forces burned to the ground at least 1,500 houses and other structures between Oct. 9 and Nov. 23. Interviews with some of the estimated 69,000 Rohingya who have now fled to neighboring Bangladesh, paint a chilling picture of collective punishment and brutalization.

Witnesses provided credible accounts that the army and police shot fleeing villagers, detained and summarily killed men, women and children, sexually abused and raped women and girls, often in front of other family members, burned people alive in their homes, beat and tortured people in custody, sometimes to death, and arbitrarily detained hundreds. More than 450 Rohingya are being held in Buthidaung prison on charges linked to the attacks on the border posts. A report by the UN Office of the High Commissioner for Human Rights (OHCHR), based on interviews of refugees, provided equally detailed accounts of atrocities and concluded that the abuses “seem to have been widespread as well as systematic, indicating the very likely commission of crimes against humanity.” 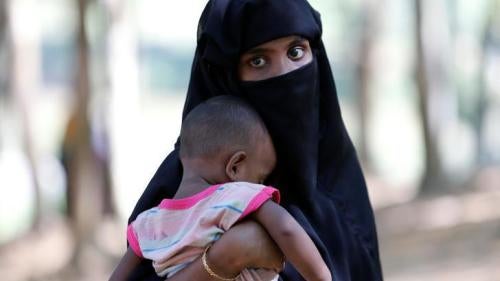 So far, the Burmese government has responded with waves of denials. First, the State Counsellor Office Information Committee, created by Aung San Suu Kyi, denounced without basis the satellite imagery and claimed accounts of sexual violence in Rakhine State were “fake rape.” The government set up a national investigation commission that lacks both independence and credibility. Led by vice-president Myint Swe, a retired general, and composed of current and former government officials, the commission promptly announced military clearance operations had been conducted lawfully, denied all rape allegations, and rejected claims of malnutrition cases from the aid cut-off. Another commission of state-level officials revealed its racist bias when its chair, a Rakhine member of parliament, told the BBC that no soldier would rape Rohingya women because they are “too dirty.”

Last week, Myint Swe and his commissioners conducted another supposed investigation, racing through 17 villages in three days, raising fundamental questions of basic research methodology and protection of victim confidentiality and assurances of non-retaliation. At the same time, commissions established by the army and the police to examine the conduct of their own personnel were also in the area at the same time, further raising the fear quotient among already traumatized Rohingya villagers.

The best way forward is to launch a credible, independent, international investigation into the situation in Rakhine State, both recent events and the 2012 abuses, and an inquiry into underlying factors, notably successive governments’ repression and discrimination against the Rohingya, that perpetuate a de facto system of internment for tens of thousands of people.

Yanghee Lee, the UN Special Rapporteur on human rights in Burma, called this week for the establishment of a commission of inquiry at the UN Human Rights Council session in Geneva. Council member states should not wait for further abuses but promptly establish such an independent, international commission that can have some hope of stopping atrocities in Rakhine State.