(Warsaw) – Relatives of peaceful Tajik opposition activists who are taking part in an intergovernmental conference about human rights and fundamental freedoms in Warsaw have been viciously attacked in cities across Tajikistan, Human Rights Watch said today. Tajik authorities should unequivocally condemn and effectively investigate these violent acts of retaliation. They should also take measures to stop abusive online harassment of a Human Rights Watch Central Asia researcher.

The annual Organization for Security and Co-operation in Europe (OSCE) Human Dimension Implementation Meeting (HDIM) is an intergovernmental conference from September 19 to September 30, 2016. In a highly unusual move, the Tajik delegation walked out of the conference on September 22, protesting that the OSCE had allowed opposition activists to take part. The OSCE and its participating countries should condemn acts of collective punishment and violent retaliation, and call on the Tajik government to end them and uphold Tajikistan’s core OSCE commitments on freedom of expression.

“It is a bitter irony that exercising one’s free speech at an international conference designed to protect free speech would result in vicious mob violence against participants’ relatives,” said Kenneth Roth, executive director of Human Rights Watch. “The coordination of near simultaneous attacks across several cities suggests official sponsorship, as does the authorities’ failure to stop or condemn them.”

Relatives of peaceful Tajik opposition activists from the banned Islamic Renaissance Party of Tajikistan (IRPT) and the Group 24 opposition movement who participated in silent protests and made public presentations during the conference have been attacked in circumstances that suggest that the attacks were orchestrated and coordinated by Tajik authorities. Mobs have attacked the relatives’ homes over several days, and the government has organized rallies among high school and college students, labeling the activists “enemies of the people.”

Roth spoke on a panel during the opening session of the conference on September 19.

Detention of Silent Protesters’ Relatives
On September 19, several dozen Islamic Renaissance Party activists peacefully protested outside the conference, followed by a silent protest inside the plenary sessions. The activists held up signs and wore T-shirts depicting the faces of numerous individuals from the party and other groups who have been imprisoned on politically motivated charges. The following morning in Dushanbe, Tajik security services detained up to 30 relatives of the protesters after summoning them for questioning in cities including Dangara, Dushanbe, Khujand, and Rudaki, the protesters and several of their relatives told Human Rights Watch.

Ilhomjon Yakubov, a party leader in exile, said that on September 20, authorities detained his mother, brother, and sisters, taking them to the local security services building in Khujand. Security officers harassed and interrogated them, and threatened to “destroy them” if Yakubov continued to publicly criticize the government, he said. The family members were released the next day. 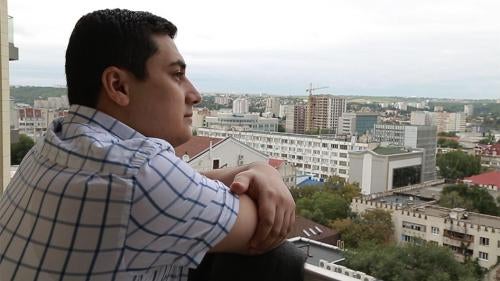 Retaliation After Conference Presentations
Beginning September 20, various Islamic Renaissance Party and Group 24 activists made presentations during the plenary sessions, raising issues about Tajikistan’s human rights record, including politically motivated arrests and violations of the freedoms of expression, assembly, and association.

On September 21, Human Rights Watch and the Norwegian Helsinki Committee presented a video, “Tajikistan: Hunting Critics at Home and Abroad.” The event was well-attended, including by members of Tajikistan’s official delegation. Speakers at the event included Shabnam Khudoydodova, Vaisiddin Odinaev, Ilhomjon Yakubov, and Sobir Valiev, political activists who spoke about violations of human rights in and outside Tajikistan.

Ilhomjon Yakubov
On September 22, at about 2 p.m., more than 200 local residents converged on the family home of Ilhomjon Yakubov in Khujand, observers outside the home said. The crowd chanted that Yakubov is an “enemy of the people,” “terrorist,” and “traitor,” and held up signs with these slogans. Several demonstrators attempted unsuccessfully to break into the home where Yakubov’s mother was.

They left after an hour, but returned at 2 p.m. the next day, this time throwing rocks and again attempting unsuccessfully to break down the door. At the same time crowds also converged on the home of Yakubov’s sister, Munira Juraeva, chanting similar slogans. Relatives noticed members of Tajikistan’s security services in civilian clothes among the crowd. Yakubov’s relatives called the local police, but they did not respond.

On September 26, security services officers went to Yakubov’s mother’s house and warned family members that unless Yakubov returns to Tajikistan to face “justice” they would confiscate the family’s property. They accused Yakubov of being paid by international organizations to “defame Tajikistan’s reputation.”

On September 27, 150 to 200 people converged on Yakubov’s brother’s home, shouting that Yakubov had “sold out” Tajikistan.

Shabnam Khudoydodova
On September 20 and 21, similar events also occurred in the city of Kulob at the family home of Shabnam Khudoydodova, an independent activist. Relatives and neighbors who watched the incident said that on September 20, a crowd of students, teachers, school directors from various schools, city officials, and members of the local TV station gathered in her 9-year-old daughter’s classroom. The crowd taunted her, calling her the daughter of a “terrorist” and “enemy of the people,” and followed her home, where she lives with her grandmother and other relatives.

The crowd surrounded the house, chanting that Khudoydodova should be prosecuted for criticizing the president. Members of the local TV station, including a prominent TV executive, Safarali Ergashev, filmed the event, and city officials took an active lead role. The demonstration lasted about an hour.

The crowds returned the next day. Demonstrators attacked Khudoydodova’s 10-year-old niece, hitting and kicking her, apparently mistaking her for Shabnam’s daughter. The demonstrators threw rocks at the gates and windows, and several people scaled the gates and broke into the house, beating at least three relatives who attempted to keep them out, shouting that the relatives were “terrorists.” The crowd confronted Shabnam’s mother, Jamila Khudoydodova, shouting, “We will burn your house down,” demonstrators said.

A source close to Kulob’s city administration told Human Rights Watch that the Kulob branch of the Tajik security services had organized the events, summoning city officials, school directors, and the local TV station executive to mobilize students and others to go to the Khudoydodova residence.

On September 23, Khudoydodova’s mother attempted to file a complaint with the local police station. She said that the police official shouted at her:

How dare you attempt to complain about this?! Why are you not ashamed of your daughter? You should be happy they [the demonstrators] did not pour gas on your home and burn it to the ground! Tell your daughter to shut up and not to write or say anything. We will soon catch her and hang her in front of your eyes!

Retaliation Against Other Conference Participants
Another conference speaker, Vaisiddin Odinaev, an independent activist, reported that his relatives in Dushanbe were also summoned, interrogated, and harassed, following his decision to speak out at one of the plenary sessions.

Human Rights Watch has also received credible reports that mobs appeared in front of the family homes of Muhammadsobir Abdukakhor and Bobojon Kayumov, Islamic Renaissance Party leaders in exile, and the home of an imprisoned party activist Rahmatullo Rajab.

Organized Lectures, Demonstrations in Front of OSCE Buildings in Tajikistan
Radio Ozodi, the Tajik service of Radio Free Europe, broadcast footage from Dushanbe on September 22, showing groups of protesters in front of the local OSCE office. Protesters threw rocks, kicked the gates, and accused the organization of supporting terrorists. Ozodi broadcast video footage of a lecture given to students in a medical institute on September 22, where students were shown pictures of Warsaw conference participants. Similar demonstrations also occurred in front of various OSCE field offices around Tajikistan.

Threatening images of Swerdlow continue to be displayed on a variety of fake Facebook accounts that almost exclusively contain images designed to threaten and harass peaceful political opposition activists. Human Rights Watch and other analysts believe the accounts are probably tied to the Tajik security services.

“Orchestrated attacks targeting our researcher are an attempt to silence our organization, simply because we exposed serious human rights violations,” Roth said. “The Tajik government’s PR problems won’t go away by attacking the messenger, but by fulfilling the international obligations Tajikistan has signed up to, which include releasing government critics imprisoned on politically motivated charges.”

Tajikistan is in the midst of the worst political and religious crackdown since the end of the country’s 1992-1997 civil war. Over the past two years, authorities have arrested, imprisoned, and tortured members of the country’s peaceful political opposition. They have also targeted perceived critics abroad, seeking their detention and extradition to Tajikistan, and have forcibly disappeared critics abroad, who reappeared in Tajik custody.

Building on previous statements of concern, the United States, the European Union, and other key international actors should unequivocally call for an end to retaliation and collective punishment, Human Rights Watch said. OSCE participating states should closely monitor the reprisals and raise their concerns in OSCE official meetings until reprisals end. Tajikistan’s international partners should also press the Tajik government to uphold its international obligations to respect freedom of association, assembly, expression, and religion, and impose targeted punitive measures, such as asset freezes and visa bans, on Tajik government officials responsible for imprisoning peaceful activists, torture, and other grave human rights violations.

“It’s bad enough that Tajikistan is locking up its critics, but now it’s retaliating against those who seek OSCE help,” Roth said. “OSCE members should end this affront to their collective defense of free speech and to halt the rapid deterioration in Tajikistan’s human rights record.”