(Berlin) – Ukrainian authorities need to conduct further investigations into allegations that their forces were responsible for indiscriminate attacks in eastern Ukraine, Human Rights Watch said today. Human Rights Watch met with high-level government officials in Kiev about the issue on December 2 and 3, 2014.

The government’s initial investigations concluded that Ukrainian forces were not responsible for the indiscriminate attacks that Human Rights Watch documented. However, the government investigation into the attacks using unguided rockets was based solely on records kept by the agency responsible for military operations in eastern Ukraine and did not examine any forensic evidence on the ground, including impact sites in areas government forces control. The cluster munitions investigation apparently looked at the wrong weapon and did not consider the specific weapon used in the attack that Human Rights Watch documented.

“That Ukraine started an investigation shows that the authorities do not take these allegations lightly, but a more thorough investigation is needed,” said Kenneth Roth, executive director of Human Rights Watch. “The investigation conducted so far has barely scratched the surface, so it doesn’t allow meaningful conclusions to be drawn.” 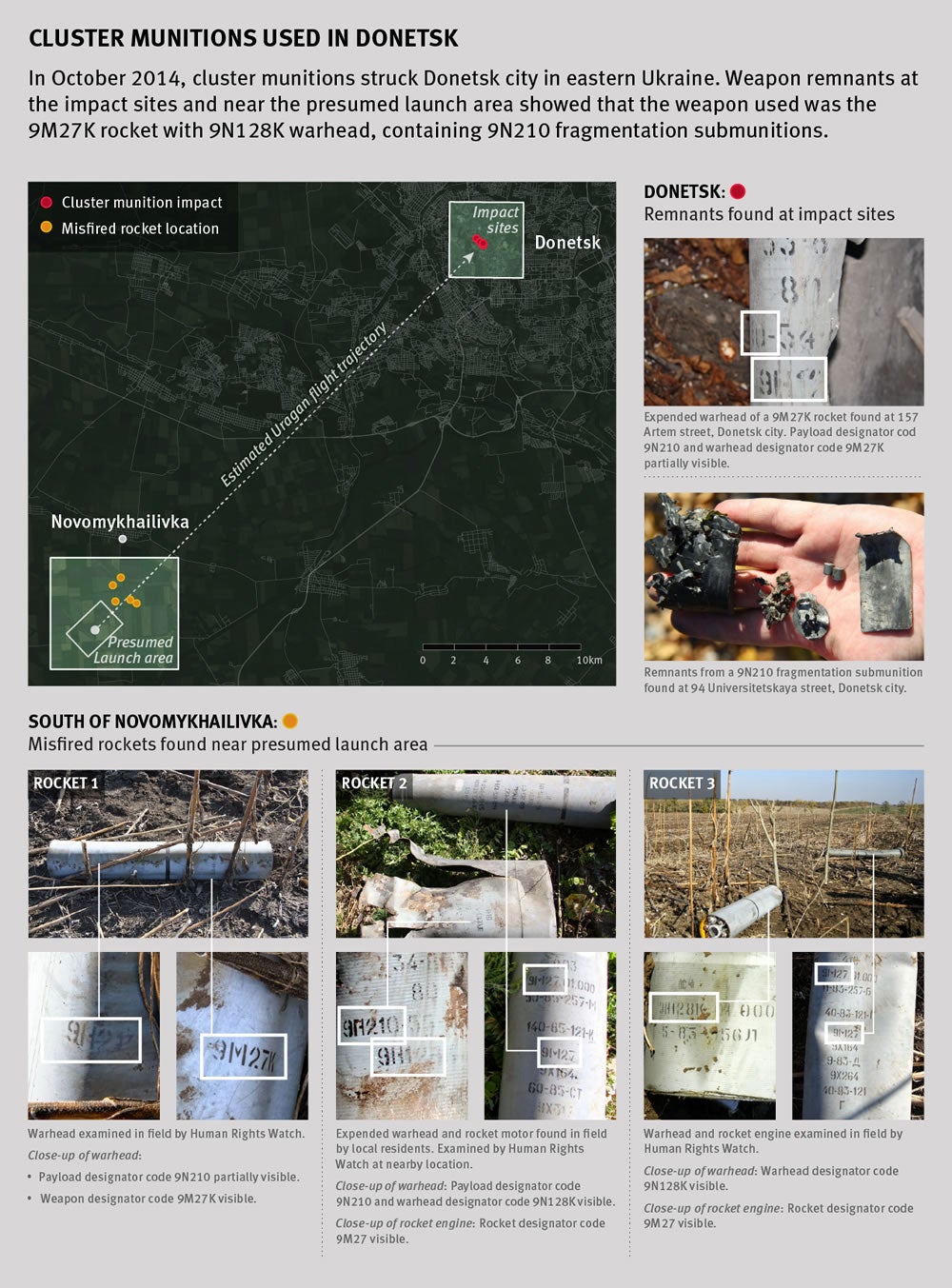 In a November 17 meeting with the prosecutor’s office, Human Rights Watch shared information about nine attacks in and around Donetsk city. Human Rights Watch had determined that the attacks were indiscriminate and therefore unlawful under international humanitarian law, or the laws of war, and that the circumstances pointed toward government responsibility. The information, together with a Human Rights Watch report on October 20, included the location, time, date, weapon type, and incoming direction of the attacks.

In the December 3 meeting, the military prosecutor described the steps that his office had taken to investigate these incidents based on the information that Human Rights Watch had provided.

The prosecutor said that his office checked records at the Anti-Terrorist Operation Center, which oversees all military and security operations in eastern Ukraine, to determine whether unguided Grad rockets had been used. He that said the records, including orders issued to troops on specific dates, showed that government forces had not carried out Grad attacks at the times and dates indicated by Human Rights Watch. He also said that National Guard forces and so-called volunteer battalions had not had access to functioning Grad systems. During the meeting and in a statement to the media afterward, the prosecutor said that his investigation had concluded that government forces were not responsible for these attacks.

“An investigation that looks only at the military’s own records is hardly a thorough investigation,” Roth said. “Before denying government responsibility, investigators should examine other independent evidence to determine who used these indiscriminate weapons.”

Ukrainian authorities face serious challenges in investigating these attacks since many of the impact sites are in territory held by separatist forces, Human Rights Watch said. But in one Grad attack documented by Human Rights Watch, both the impact site and the presumed launching area are in territory now controlled by government forces, and a full investigation should be possible. The attack, which took place on July 12 in Maryinka, killed at least six civilians.

The military prosecutor said that he had also concluded that government forces were not responsible for several cluster munition attacks in Donetsk in early October. The military prosecutor told Human Rights Watch that his office had examined the inventories of several weapons prohibited under the 1997 Mine Ban Treaty, to which Ukraine is a party. Because the examination showed that no prohibited weapons had been moved, he concluded that government forces had not used cluster munitions.

According to the list that the prosecutor presented, however, the investigation had not checked the inventory of the weapon that Human Rights Watch documented. In the October 20, 2014 report, Human Rights Watch identified the weapon used in Donetsk as a 9M27K cluster munition rocket with 9N210 fragmentation submunitions. This weapon is not prohibited under the Mine Ban Treaty but under the 2008 Convention on Cluster Munitions. Although Ukraine has not joined the cluster munition convention, using this weapon in populated areas constitutes an indiscriminate attack because its wide-area effect means that it does not distinguish between combatants and civilians. (The list of weapons that the prosecutor had checked included the 9M27K3 rocket with PFM-1S antipersonnel mines. Although the 9M27K3 and 9M27K rockets have similar names, they are different and banned by different treaties).

In the December 14, 2014 letter, Human Rights Watch urged Ukraine’s military prosecutor to continue the investigation into indiscriminate attacks, including by inspecting the inventory of the cluster munition weapon that was actually used in Donetsk in early October.

Human Rights Watch has also met with officials from Ukraine’s Defense, Foreign Affairs, and Interior ministries and the Security Service of Ukraine.

During the meetings, Human Rights Watch urged Ukrainian authorities to issue clear and specific orders to government forces not to use explosive weapons with wide-area effects, such as salvos of unguided rockets, against targets in populated areas. Ukraine should accede to the Convention on Cluster Munitions and not use those weapons under any circumstances, Human Rights Watch said.

Defense officials informed Human Rights Watch that following the November 17 meeting, the ministry had circulated instructions to all its commanders to inform troops about criminal responsibility under Ukrainian law for violating the laws of war (article 438 of the Criminal Code of Ukraine) and that international humanitarian law should be strictly respected.

“The Defense Ministry’s instructions are important, but troops in the field won’t understand broad provisions of the law without an explanation,” Roth said. “The authorities should issue explicit orders that weapons such as Grad rockets should never be used in populated areas, even in response to attacks launched by rebels from civilian areas, and cluster munitions should never be used, period.”

Roth raised the subject of the armed conflict in Ukraine with officials in Russia and urged the authorities there to use their influence with pro-Russian rebels to curb abuses. In Moscow, Human Rights Watch met with officials from the Foreign Affairs Ministry and the ombudsman’s office, as well as members of the Presidential Council for Civil Society and Human Rights.

“The Geneva Conventions apply to all parties,” Roth said. “Violations by one side cannot be used to justify violations by another side.”