Friends abroad often ask how I’m coping after last year’s escalation in Gaza. I struggle to find the words to describe the terror of lying awake at night not knowing if I’d see daylight again, the anguish of those I interviewed who survived the obliteration of their families by Israeli strikes, the agony of seeing Gaza’s prominent towers reduced to mountains of rubble.

During the 11 days of hostilities that began on May 10, 2021, 260 Palestinians were killed in Gaza, including at least 129 civilians and 66 children, according to United Nations figures. Twelve civilians in Israel were also killed as a result of indiscriminate Palestinian rocket attacks. The escalation took place amid discriminatory efforts by Israeli authorities to force Palestinians from their homes in occupied East Jerusalem: policies that are part of Israeli authorities’ crimes against humanity of apartheid and persecution against millions of Palestinians. 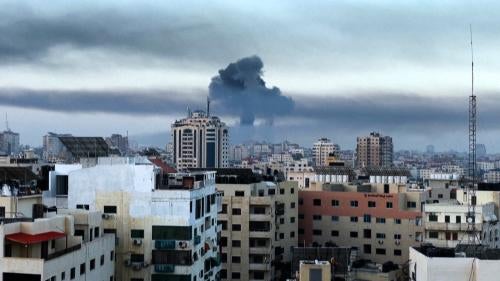 I still hear the heavy explosions, ambulances, and the voices of survivors recounting scenes of horror as their houses collapsed upon them. I remember seeing people pour into the streets following the ceasefire, celebrating their survival.

With no serious efforts in Israel or Palestine to hold perpetrators of serious crimes to account, the next round of hostilities always feels like it’s just around the corner. It usually comes before Gaza has fully rebuilt from the last one. Meanwhile, Israel’s sweeping restrictions on the movement of people and goods remain in place, contributing to limited access to basic services and making 80 percent of the population reliant on humanitarian aid.

Walking recently on al-Wahda Street in Gaza City, I recalled the words of 16-year-old Omar Abu Al-Awf, the only surviving member of his family after Israeli strikes killed 44 civilians on that street: “Why did they kill my family and leave me orphaned? Until that day, we had a house. I had a family. Each family member had a dream. It all disappeared in one second.”