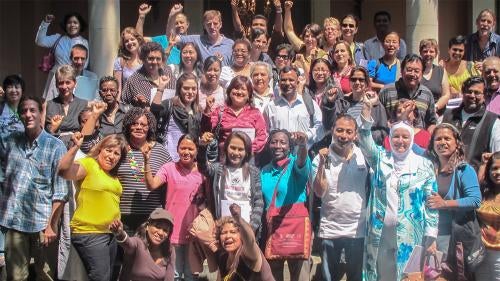 June 16 marks 10 years since the International Labour Organization (ILO) adopted a groundbreaking treaty establishing global labor standards to protect domestic workers’ rights. In that time, 32 countries have joined and dozens have improved labor protections for these workers—mostly women—who have long been neglected and exploited.

A new video features domestic worker leaders reflecting on the progress achieved since the  ILO Domestic Workers Convention was adopted. Changes include new, comprehensive laws in several countries, and incremental improvements in others, including minimum wages, rest days, paid holidays, written contracts, access to labor courts, and collective bargaining agreements. The organization of the domestic work sector has also been growing: the International Domestic Worker Federation, founded in 2013, now has half a million members worldwide.

Human Rights Watch, International Domestic Workers Federation, International Trade Union Confederation, and Women in the Informal Employment: Globalizing and Organizing created the video, which recounts how domestic workers, trade unions, and nongovernmental organizations mobilized to win a treaty that guarantees domestic workers equal protections as other workers, while addressing the rights of children and migrants in domestic work.

Society has long devalued “women’s work” such as caregiving, cleaning, and cooking. In 2010, the ILO found that only 10 percent of domestic workers worldwide had the same legal protections as other workers. Isolated in private homes, their working conditions were dependent on the whim of their employers.

For two decades, Human Rights Watch documented that domestic workers around the world routinely face long working hours with little rest. Some have been locked up inside houses and their low wages are often not paid on time—if at all. Many experience verbal, physical, and sexual abuse.

There is much to celebrate and much to do. A new ILO report found 36 percent of domestic workers remain completely left out of labor laws. While legal protections for domestic workers across the Middle East have improved – the notorious kafala (sponsorship) system, in which employers double as immigration sponsors, leaves workers at high risk of abuse. A 2020 Human Rights Watch report highlighted how domestic workers cannot access the protections of India’s sexual harassment law. And while several countries in Latin America and Europe have strong laws, implementation remains a key challenge.

But the domestic workers’ movement is growing stronger each day. Governments should step up to ratify and apply the treaty. The next 10 years can promise even greater victories.