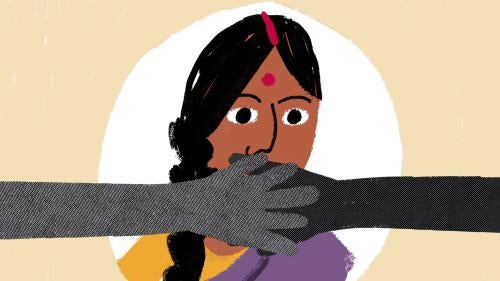 (New York) – The Indian government’s failure to properly enforce its sexual harassment law leaves millions of women in the workplace exposed to abuse without remedy, Human Rights Watch said in a report released today. The government should urgently ensure compliance with its 2013 Sexual Harassment of Women at Workplace (Prevention, Prohibition and Redressal) Act, or POSH Act as it is popularly known.

The 56-page report, “‘No #MeToo for Women Like Us’: Poor Enforcement of India’s Sexual Harassment Law,” finds that while women in India are increasingly speaking out against sexual abuse at work, in part due to the global #MeToo movement, many, particularly in the informal sector, are still constrained by stigma, fear of retribution, and institutional barriers to justice. The central and local governments have failed to promote, establish, and monitor complaints committees – a central feature of the POSH Act – to receive complaints of sexual harassment, conduct inquiries, and recommend actions against abusers.

“The #MeToo movement helped to shine a light on violence and harassment at work, but the experiences of millions of women in India’s informal sector remain invisible,” said Meenakshi Ganguly, South Asia director at Human Rights Watch. “India has progressive laws to protect women from sexual abuse by bosses, colleagues, and clients, but has failed to take basic steps to enforce these laws.”

Human Rights Watch conducted field research and over 85 interviews in Tamil Nadu, Haryana, and Delhi, including with women working in both the formal and informal sectors, trade union officials, labor and women rights activists, lawyers, and academics. The findings also draw upon research by Indian organizations.

Women, inspired by the global #MeToo movement, who came forward with complaints against men in senior positions have often encountered a backlash, including threats, intimidation, retaliation, attempted bribes, gaps and bias in legal procedure, and stigma. Those accused have frequently used the colonial-era criminal defamation law against the women who dare to speak out. These produce a chilling effect deterring other victims from coming forward.

The September 2020 alleged gang rape and murder of a 19-year-old Dalit woman in Uttar Pradesh state highlighted both rampant violence against women in India and structural violence against poor and marginalized communities. The authorities’ response illustrates the barriers women face in accessing justice.

The vast majority of India’s women workers, 95 percent (195 million), are employed in the informal sector. These include jobs from street vendors, domestic work, agriculture, and construction, to home-based work, such as weaving or embroidery. There are also 2.6 million early-childhood care and nutrition workers under the government’s Integrated Child Development Services; over 1 million Accredited Social Health Activists (ASHA) who work as community health workers; and 2.5 million midday meal cooks, who prepare the free lunches provided in government schools.

“For women like me, what is #MeToo? Poverty and stigma mean we can never speak out,” said a part-time domestic worker who was sexually harassed by a security guard. “There is no place safe for women like us.”

The 2013 POSH Act mandates employers to take steps to protect female employees from sexual harassment in the workplace and to provide procedures for resolution, settlement, or prosecution. It widened the definition of the workplace and covered the informal sector, including domestic workers. It protects all workers in any place visited by the employee during the course of her employment, including transportation.

The law builds upon the 1997 “Vishaka Guidelines” set out by the Supreme Court, mandating that employers take steps to protect female employees from sexual harassment at work after Bhanwari Devi, a government social worker, was gang raped in 1992 by men angered by her efforts to stop a child marriage in their family.

The POSH Act requires employers to create an Internal Committee at each office with 10 or more employees. For other establishments with less than 10 employees and for women working in the informal sector, the state government’s district officer or collector is required to form a Local Committee in each district.

These committees handle complaints and recommend actions ranging from a written apology to termination of employment, providing an alternative to filing a criminal complaint with police. Under the POSH Act, the government is also responsible for developing training and educational materials, organizing awareness programs, monitoring implementation of the law, and maintaining data on the number of sexual harassment cases filed and resolved in the workplace. But studies show that many of these Local Committees simply do not exist, and when they do, there is no publicly available information on how to access them.

“Most women suffer in silence until it becomes unbearable, and then they just try to get another job,” said Sonia George, a senior official at a trade union. “They do not want to tell their families either because they are afraid that they will be prevented from working.”

Domestic workers are especially at risk of sexual harassment and violence due to their isolation in private homes and their exclusion from many key labor protections guaranteed to other workers. For domestic workers, the POSH Act says that Local Committees must refer the case to the police, leaving no civil remedy. The Indian government should amend the law to ensure that domestic workers have the same access to time-bound justice through the Local Committees as other workers, Human Rights Watch said.

While most private sector companies have Internal Committees, many exist merely on paper to show compliance without any commitment to improving the workplace culture. Employers do little to fulfill their other duties, such as prevention, raising awareness about what constitutes sexual harassment, and consequences for such behavior.

In June 2019, the Indian government, representatives of Indian workers’ groups, and representatives from Indian employers’ associations all voted in favor of the International Labour Organization Violence and Harassment Convention, a landmark treaty that establishes global standards to prevent and respond to violence and harassment in the workplace.

“The Indian government should stand for the rights of women, whether they are domestic workers, government scheme workers, or office workers, to work in safety and dignity,” Ganguly said. “The government should coordinate with workers’ organizations and rights groups to address sexual harassment and violence as a key workplace issue, partner in information campaigns, and ensure that those who face abuse can get the support and remedies they deserve.”

Illustrative Cases from the Report

Shanta (name changed), health worker
Shanta, 38, an ASHA health worker in Haryana, said that health workers are particularly vulnerable when they are called to work at night. If they bring a complaint, they come under intense pressure from family of the accused, society, and their own family to withdraw it. In January 2014, Shanta was called by a contractor at a construction site to help a woman who was about to give birth. She said she accompanied the woman to a hospital, but the ambulance driver tried to molest her on the way back:

I didn’t say anything at home because I was scared, but I called the medical-in-charge and told him what happened. The staff and supervisors helped me, and we found the driver after three days. But then the police and other ASHA workers asked me to compromise. He apologized in front of dozens of ASHA workers and they asked me not to file an official complaint. But no one told me that there was a law, and I could file a complaint at a Local Committee.

When his children and grandchildren would go out, he would purposely stay home and keep following me around. He would pat my back, but then his hands would wander. I tried to ignore. Once when he did this, there was no one at home so I went to the washroom and did not come out until others returned. I knew no one would believe me if I told them, so I kept quiet. That man used to tell me, “Wear a short dress, you will look better in it.” I put up with it because I had to earn to support my family. But I finally quit because I was so frustrated and decided not to work as a live-in maid anymore.

Shalini (name changed), domestic worker
Shalini was sexually harassed for months by a security guard of the apartment complex in Gurgaon, Haryana, where she worked as a part-time domestic worker:

He would say he loved me. He would wait by the elevator at the end of my shift and when I was alone in the elevator, he would make lewd remarks. One day, it went too far when the guard took out money, forced it into my hands, and asked me to go with him. That day, I cried endlessly when I went home and told my husband I wanted to go back to the village. My husband and my brother-in-law went to the colony and complained to the head of security, whom they knew, and the guard was quietly transferred. If my employers had come to know, they would have likely blamed me. That is why I kept quiet.

For women like me, what is #MeToo? Poverty and stigma mean we can never speak out. There is no place safe for women like us. Not our workplaces, nor our homes, and not the road we take.