(Nairobi) – Many women in Kenya are left without protection to claim their matrimonial property despite relative progress in the laws on paper, Human Rights Watch and the Federation of Women Lawyers (FIDA-Kenya) said in a report released today. A recent appeal to the Supreme Court of a June 21, 2020 lower court ruling puts this question before the court. The ruling may provide clarity regarding any ambiguities in the law and guidance on interpreting how assets acquired during marriage should be divided. Kenya should do more to carry out extensive legal reforms that address equal property rights in marriage.

The 64-page report, “Once You Get Out, You Lose Everything” documents how the 2013 Matrimonial Property Act, which recognized that married women have the same rights as married men, and other legal reforms are undermined in practice. Kenya’s constitution is consistent with international interpretations of equality and nondiscrimination but falls short of ensuring substantive change for lack of adequate enforcement.

Looking at the situation in two counties, Human Rights Watch found that ambiguous and antiquated laws that remain on the books and discriminatory social and traditional practices make it difficult for married, divorced, separated, and widowed women to claim property the law entitles them to.

“The current laws guaranteeing married women rights to matrimonial property are filled with significant gaps,” said Juliana Nnoko-Mewanu, researcher on women and land at Human Rights Watch. “The government needs to clarify by law what constitutes women’s contribution to shared property, how to value and measure it, and ultimately how that contribution is calculated as a share of property at the end of a marriage.”

Human Rights Watch and FIDA-Kenya interviewed more than 60 people, including women who are separated, divorced, or widowed, and analyzed data from 56 divorce and matrimonial property division cases with a final judgment between 2014–2019 from courts in Kakamega and Kilifi counties. Human Rights Watch and FIDA-Kenya also closely reviewed the complex legal framework for deciding such cases.

Despite the “gender-responsive” legal framework in Kenya, women encounter multiple social, legal, and judicial barriers in claiming their share of property. Although the law is clear that monetary and non-monetary contributions should be considered in sharing property at the end of a marriage, neither the law nor the High Court or Judiciary clarify what proof of contribution is required, and how such contributions should influence how property is shared.

Interview: The Case for an Equal Split in Kenya 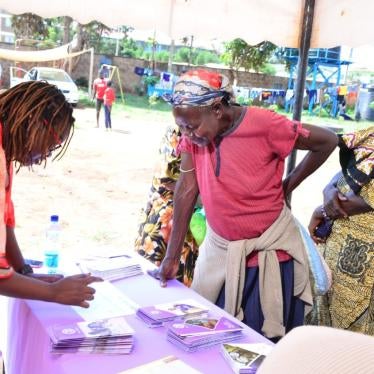 Judges are left to decide their own rules for proof and calculation of contributions. In some cases, judges have asked spouses to produce receipts from years of marriage, discriminating against some women whose principal contribution was non-monetary. Some judges do not recognize women’s unpaid care and domestic work, while others do.

Existing laws also are not consistent. Laws on succession and inheritance do not mirror the right guaranteed in the 2013 act to access property jointly acquired with spouses who have died. Under the Succession Act, the surviving spouse becomes the owner of the deceased’s personal and household items, but only retains a “life interest” in other property such as land and houses during their lifetime.

The surviving spouse cannot dispose of immovable property without court permission and a widow loses her right to use this property if she remarries. The act also exempts agricultural land, crops, and livestock in certain districts if there is no will. Succession in these cases is under customary laws, which largely discriminate against women and girls.

Even if laws are clear, women face difficulties in accessing justice through the courts. Obstacles include women’s minimal awareness of rights, inadequate access to relevant information, high costs of legal proceedings, long distances to courts, and difficulties in collecting required evidence.

“When you work on something [marriage] for 10 years and lose it all at the blink of an eye, it’s devastating,” said a 40-year-old woman whose husband forced her out of their home.

Witness: What They Gave Up To Leave a Marriage 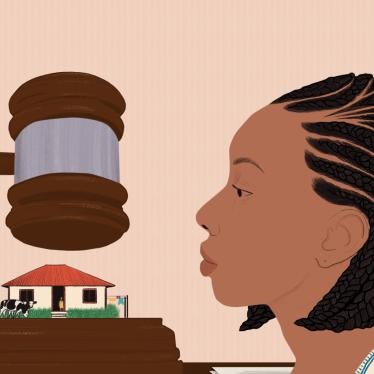 Some social and traditional practices on marriage and inheritance such as dowry, customs concerning children after divorce, and those that discriminate against women owning land and property make it exponentially more difficult for some women to access matrimonial property in Kenya.

International and regional human rights treaties the Kenyan government has ratified guarantee a fundamental right to equality and prohibit unjustified differential treatment based on sex. The government has human rights obligations to ensure women’s equal rights in marriage and during divorce. It should take concrete steps to address barriers to implementation of the 2013 act, providing clarity and guidance to judicial officials on identifying and assessing matrimonial property and to harmonize all laws to guarantee equal rights.

“The Kenyan government needs to act on principles of equality, equity, and nondiscrimination to ensure that women’s rights are protected,” Nnoko Mewanu said. “The government needs to guarantee women their share of matrimonial property in law and in reality.”

Selected accounts from the report

“I don’t have my name on any of the property we acquired even when I took a loan from my chama [women’s financial group] to pay for it. He [husband] never allowed me to have my name on the title. He would say ‘I’m the man of the house, what I have you have. If I own it, you own it.’ According to his custom [Kisii] women cannot own anything in their name. Who will support me to get my share? I’m on my own.”
– Ruth K., a 40-year-old Taita mother of two in Mtwapa, Kilifi county. In 2016, her husband forced her out of their matrimonial home, and she left with nothing.

“He beat me and chased me out of the house at night. He took all of the money that was in my wallet as well as the money in my mobile money account. I lost a lot that night. I became homeless and lost access to income from the property I had developed. And I still must pay back a loan of KSh 1.5 million ($US13,951) that I used to build the house he [ex-husband] now lives in with another woman. All I want is my house.”
– Fatuma M., a 47-year-old Muslim woman and mother of five children in Kilifi, Kilifi county. Over the course of two decades of living together and then marriage, she and her husband amassed a considerable amount of property. In 2018, her husband kicked her out of her home with nothing. She now lives in a one-bedroom government-owned house provided by her employer.

“In succession [inheritance], the wife has nothing. Same in divorce. She takes her personal belongings – nothing else and leaves her children. The truth about culture, once you [woman] get out, you lose everything.”
– Dickson Kanana, a village elder of Kirao, Malindi in Kilifi county

“I know there are courts where they are still clinging on the issue of contribution. And this is where women are suffering when they are homemakers. If you stick on direct contribution, it means they [women] lose everything.”
– William Musyoka, High Court Judge, Kakamega county

“The law says I should give a score. What is the score for each parameter? Which parameter carries more weight? Based on arbitrary weights derived from an equation I use to divide [the property]. But that equation could be wrong. How do I ensure that the equation could be tested over time based on the basic principle of jurisprudence? Principles of equity, fairness, and proportion. At the end of the day that distribution is money for money, square meter for square meter. How do you get to where the equation makes sense in dollars and square meters?”
– Reuben Nyakundi, High Court Judge, Kilifi county