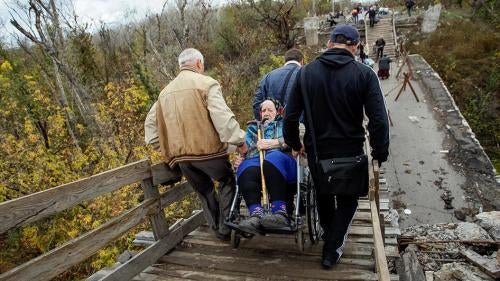 On March 28, Ukraine did away with expiration dates for electronic passes that allow civilians to travel between government-controlled territory and areas controlled by Russia-backed armed groups in the country’s east. This move marks a small but important step toward easing the lives of the estimated one million people who journey across the front lines dividing the conflicting parties every month.

Independent groups say civilians who don’t live in government controlled-areas of eastern Ukraine continue to face significant bureaucratic hurdles obtaining their passes, and many struggle to receive pensions or other benefits. About half of those who cross every month are older people who live in areas of Donestsk and Luhansk regions controlled by Russia-backed armed groups. Ukraine requires them to travel in person to retrieve their pensions from government-controlled areas.

Passes were previously valid for one year, renewable at locations in government-controlled areas, or online. According to the UN, the passes create “an unnecessary barrier, especially for older people without access to internet or computers.” Ukraine promised to ease the process by doing away with expiration dates in April 2017, but delayed implementation.

Independent advocacy groups providing services to civilians near the conflict zone welcomed the change but noted that people applying for the passes could continue to face challenges crossing, particularly if they need to correct errors in their application. It isn’t clear whether people with applications in process for regular, one-year extensions will have to apply again for the unlimited crossing pass.

Ukraine also requires civilians from non-government controlled areas to register as internally displaced persons in government-held territory in order to receive pensions – a discriminatory policy that causes needless hardships particularly for older people, many of whom are among the most vulnerable affected by the conflict in eastern Ukraine.

For the millions of Ukrainians who cross the line of contact every year to see relatives, check on property, or receive their pensions, the new limitless passes will hopefully help them avoid an unnecessary, burdensome, and often costly bureaucratic labyrinth. But the government still has a way to go toward making pensions more accessible to civilians behind the front line.