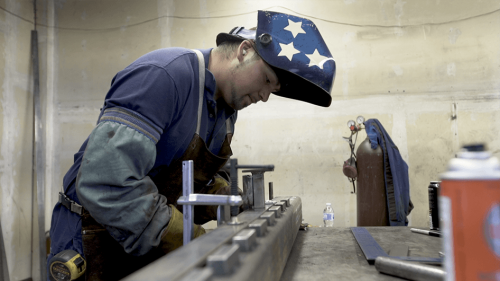 President Trump’s campaign this week to scare up support for a border wall has relied heavily on demonizing immigrants. To get a truer picture of today’s United States, the president could just ask residents of Gypsum, Colorado – and maybe even meet Alan Gonzalez.

He made local headlines when he stopped by a local store and stumbled upon an armed robbery in progress. Children were attending pre-school a few doors down. Rather than turn away, Gonzalez, a 23-year-old construction worker, confronted the robbers. One pointed a loaded 9 mm handgun at his forehead and told him not to call the police. Yet when the gunman and his accomplice fled, Gonzalez followed in hot pursuit, caught one of the gunman and put him into a headlock. During the ensuing struggle, the gunman shot Gonzalez three times, and ran away. But that didn’t stop Gonzalez, who continued the chase until finally collapsing on the sidewalk covered in his own blood.

Miraculously, Gonzalez survived and became a star witness for the prosecution. Had Gonzalez not chased down the robbers, the prosecutor said, they might never have been caught. As a result of his testimony, the shooter and three others involved in the crime spree went to prison.

Gonzalez is an undocumented immigrant from Mexico. He could have decided it was in his best interest to disappear rather than draw attention to himself by trying to stop a crime. Yet he chose to stop a robbery and cooperate with police, putting his life, and his life in the United States, at risk. The court and prosecutor hailed him as a “hero.” Local cops nicknamed him “Superman.”

Gonzalez, who is featured in this Human Rights Watch video, is not the only heroic immigrant I met while investigating US policy on special visas given to those who assist with investigations or prosecutions of certain crimes. Over the years, thousands of undocumented immigrants have come forward – many putting themselves at great risk – to help prosecutors and police stop crimes, making communities safer for everyone. If immigrants believe they will be treated as criminals by law enforcement, few if any will cooperate. If we are serious about keeping communities safe, we need to build trust, not walls.