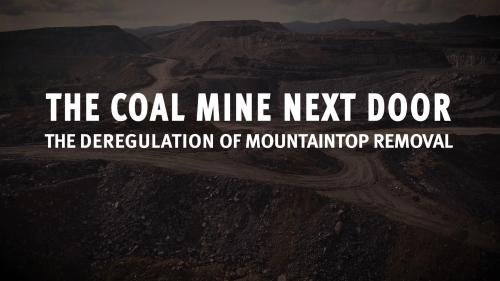 The Coal Mine Next Door

The 88-page report, The Coal Mine Next Door: How the US Government’s Deregulation of Mountaintop Removal Threatens Public Health, finds that Congress failed to mitigate health risks associated with this form of mining when it voted to roll back a modest regulation to protect streams from mining pollution. In reversing the regulation, Congress made it easier for the coal industry to destroy mountains and bury the waste rock in streams without monitoring or addressing the environmental impacts, while relying on a deeply flawed industry-funded study that was not subject to peer review. In addition, the Trump administration abruptly withdrew funding from a study that could have established broad consensus around the practice’s health impacts in an apparently deliberate effort to prevent important information regarding the health risks of mountaintop removal mining from coming to light.
“The Trump administration and Congress proudly rid the country of a regulation and a study that they claimed cost coal jobs,” said Sarah Saadoun, business and human rights researcher at Human Rights Watch. “But what they actually did is recklessly endanger the health of people in some of the poorest and unhealthiest communities in America.”
Mountaintop removal mining involves annihilating up to 400 vertical feet of a mountain with explosives to exploit the underlying coal seams. The massive amount of waste rock is dumped into valleys, forming “valley fills” as big as 1,000 feet wide and one mile long. The blasting and valley fills generate air and water pollution that, if unregulated, can endanger the health of people who live in the nearby valleys, known as hollows, many of whom depend on the coal industry for their livelihood.

Human Rights Watch visited the homes of seven families living near a mountaintop removal mine on Coal Mountain in Wyoming County, West Virginia whose well water turned grey or orange and began to smell of rotten eggs, which can indicate ground or surface water pollution related to mining activities. Tests of their wells, as well as of those belonging to many other families near the mine who believe their water became significantly degraded after mining began, revealed high levels of iron and manganese, and, in some cases, arsenic and lead. They worry constantly about the health impacts of being exposed to these metals. “I’m worried about my babies. If it’s safe to bathe them,” one woman told Human Rights Watch. Her husband, who was born in the valley, is a coal miner and they have two young children.

Since 2009, public health researchers at West Virginia University and elsewhere have published over a dozen studies showing significantly higher rates of cardiovascular disease, lung and other types of cancer, birth defects, and overall mortality in counties with mountaintop removal compared to Appalachian counties with other types of mining or no mining at all, even after they controlled for factors such as poverty, smoking, obesity, education, race, and rurality.

In 2016, the Department of the Interior, which oversees surface mining, awarded a $1 million grant to the National Academy of Sciences (NAS) to conduct a 2-year study assessing the potential health risk of surface mining operations in Central Appalachia. On August 18, 2017, the Interior Department under the Trump administration ordered the NAS to halt its work on the study without offering a credible explanation. The agency’s Office of Inspector General investigated the decision and found “departmental officials were unable to provide specific criteria used for their determination” to halt the study.

The chair of the study, Paul Locke, an environmental health scientist at John Hopkins University who has worked with the NAS for 15 years, told Human Rights Watch that the decision was highly unusual. He worried about what it means for the impacted communities, but also for the future of science-based government policy. “My concern is not only that science is politicized now, it’s that science will be politicized for the future.”

Between 1985 and 2015, in the aggregate, mountaintop removal cleared 1,120 square miles of land – an area around the size of Rhode Island – in southern West Virginia, eastern Kentucky, the western edge of Virginia, and the northwest tip of Tennessee, according to a mapping project using satellite imagery that was done by SkyTruth, Appalachian Voices, and Duke University. By 2012, the Environmental Protection Agency estimated that valley fills associated with these mines buried 2,400 miles of stream, a distance longer than the Mississippi River. Valley fills also severely contaminated hundreds of miles of streams, causing them to lose half their species of fish, according to the US Geological Survey, a science agency within the Interior Department. Mining-related contamination can also travel to groundwater, potentially tainting groundwater sources for drinking and household use. Human Rights Watch research found that the risk is especially high for those who rely on private wells, since the responsibility for monitoring and treating water falls on individual owners.

How companies in West Virginia can mine without having a plan to protect people living nearby from dangerous pollution.&#13;

Read more
On December 20, 2016, after studying the issue for eight years and receiving 94,000 public comments, the Interior Department enacted the Stream Protection Rule requiring coal companies to monitor and restore streams impacted by their activities. But six weeks later, the newly elected Congress invoked the Congressional Review Act, a little-used law that gives it veto power over federal agency rules, to cancel the rule. Not a single lawmaker who spoke in favor of canceling the rule raised the health concerns related to mountaintop removal. Several referred to a study commissioned by the National Mining Association that claimed that the rule risked 77,000 jobs – almost as many jobs as existed across the entire industry in 2016 — and a far cry from the several hundred jobs that a government regulatory impact assessment estimated the rule would cost.

Sherry Walker, whose husband and father were coal miners, sued a coal company that she believes contaminated the groundwater sourcing her private well, telling Human Rights Watch that in her view, supporting mining goes hand-in-hand with protecting miners and their families. “I have nothing against coal mining. It’s my family’s trade; it’s our way of life. But if you damage someone’s property, take responsibility,” she said.

“The case of mountaintop removal highlights the dangers of letting industry interests, rather than sound science, lead regulatory policy,” Saadoun said. “No government should make people pay for jobs with their health.”