Donate Now
(Istanbul) – President Recep Tayyip Erdoğan opens Istanbul’s third airport today amid a labor dispute that has led to the jailing and criminal investigation of 31 workers, Human Rights Watch said today. The workers, including a union leader, had been protesting working conditions at the airport construction site.

Union representatives told Human Rights Watch that an unrevealed number of workers who joined the protest were promptly dismissed from their jobs and that the airport construction site is being heavily policed to prevent any further demonstrations.

“Behind the glass and steel of President Erdogan’s newest mega-project, 30 construction workers and a union leader are sitting in jail for protesting poor working conditions,” said Emma Sinclair-Webb, Turkey director at Human Rights Watch. “The jailed workers should be freed, the criminal investigations against them and many others dropped, and workers unfairly fired for protesting should get their jobs back.”

The protest began on September 14, 2018, when workers put down their tools, presented a series of demands about poor working and living conditions, and began a one-day demonstration. Their concerns included the high number of accidents and deaths during three years of construction at the vast site.

That protest rapidly grew and, according to gendarmerie reports seen by Human Rights Watch, a crowd of 2,000 protesting workers swelled to 10,000. The report said that workers damaged property on the site and shouted slogans. Gendarme and police units used teargas and water cannon to disperse them.

Executives from Istanbul Grand Airport (IGA), the company in charge of airport construction, which will also manage the airport, convened a meeting with workers’ representatives, who presented their demands. They included immediate payment of overdue wages, an end to arbitrarily docking wages, and an end to partial payment of wages in cash to avoid the full social security contributions. Workers also demanded improved workplace safety to prevent work-related deaths and better living conditions, nutrition, and health care. 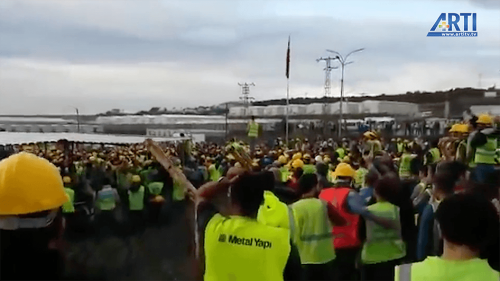 On September 16, the Istanbul governor announced that 401 workers had been taken into custody, but that 275 of them had been released. Most were arrested the night after the protest at their dormitories on the building site. Others were detained when their IDs were checked as they arrived at the building site the next day. Police and gendarmerie had in some cases forcibly entered the dormitories, kicking open the doors, to search them and detain workers.

Of the 43 workers taken before a court on September 19, 24 were placed in pretrial detention pending completion of a criminal investigation, and 19 were released under judicial controls, requiring them to sign in at a police station twice a week and barring them from overseas travel.

Further arrests followed. On October 5, Özgür Karabulut, head of the Construction Workers Union, Dev Yapı-İş, was arrested over his speech to the workers on September 14, which did not advocate violence. Karabulut is among the 31 workers still held in pretrial detention in Silivri prison. Three more men among the jailed workers are also trade union representatives from the construction workers union İnsaat-İş. Based on the record of their court testimony, workers justified their protest by citing poor workplace safety, accidents they had themselves had, difficult working conditions, and unfair docking of pay.

The prosecutor has accused them of disrupting the freedom to work, violating the law on demonstrations and public assemblies, damaging public property, resisting police, and possessing weapons.

On October 12, Kadri Samsunlu, the IGA CEO, told journalists that he regretted that the protests had taken place and that the gendarmerie and police had forcibly dispersed the workers with teargas. He acknowledged that the workers had been right in some of their complaints and that steps had been taken to address their concerns. However, media reports of his comments made no mention of the workers arrested or fired. Human Rights Watch wrote to Samsunlu and IGA, seeking comment on these incidents and developments but had not received a response at time of writing.

Representatives of Health and Safety Labour Watch Turkey (İşçi Sağlığı ve İş Güvenliği Meclisi, İSİG), a nongovernmental group, and the union Dev Yapı-İş told Human Rights Watch that there have been at least 38 confirmed workplace deaths at the airport building site over three years. They said they suspect the figure may be much higher because of underreporting of deaths and accidents, and a lack of measures to ensure their thorough and effective investigation. The Ministry of Family, Labor and Social Policies made a statement in February 2018 refuting media reports of 400 deaths, stating that social security records showed that 27 workers had died at the site. The latest death at the site was reported in the media on October 21, when the body of a worker who has not been publicly identified was recovered from a manhole at the site.

“The government advertises Istanbul’s new airport as the biggest in the world, but the prestige project has been marred by reports of accidents and arrests of protesting workers,” Sinclair-Webb said. “It is imperative for the authorities to improve working conditions and investigate deaths and injuries rather than using the police and courts to stifle workers’ demands.”