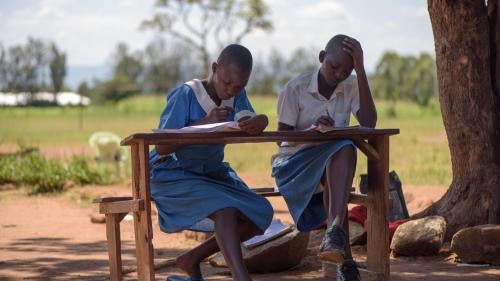 In Zambia, 28 percent of girls and young women aged 15 to 19 are mothers or have been pregnant. That is more than 275,000 teenagers. In addition to this staggering rate of adolescent pregnancy, only 50 percent of girls who become pregnant go back to school.

Zambia has had a re-entry policy since 1997 allowing girls to return to school after having a child. It was a positive step toward upholding girls’ basic right to education, expanding their future job options, and contributing to the country’s economic progress.

But many young mothers are still dropping out of school, because the government isn’t putting the policy into practice.

Earlier this summer, I met with local groups working on this issue in Zambia. In an unassuming office – decorated with girl’s education awareness posters – in Lusaka, the capital, one advocate told me that while the government often touts the policy, its commitment is seriously lacking. She told me that school officials are not trained on the policy guidelines and “some have never even seen a copy.” The government doesn’t monitor school compliance, and there are no consequences if they don’t respect girls’ right to be in school.

Adolescent mothers lack the mental health and logistical support the policy requires, such as assistance with paperwork for school leave. And many encounter stigma and ridicule in school. Faith-based schools, including those with state funding, often force girls who become mothers to transfer to other schools, deeming them a “bad influence.”

The government has a national strategy plan to address Zambia’s child marriage rates, which are among the highest in the world. The plan recognizes that encouraging adolescent mothers to return to school lessens the likelihood that they will marry before age 18, but this strategy can’t succeed unless schools carry it out.

The government should direct all schools to respect the policy, and provide guidance on pragmatic ways schools can support young mothers. It should make sure that school staff know about and comply with the policy guidelines, and that they are accountable if they don’t. Trained counselors should meaningfully support pregnant girls and adolescent mothers and help them return to school. Adequately trained teachers should provide education for all students about sexuality and reproductive health.

It has been more than 20 years since the Zambian government promised that young mothers could return to school. The government shouldn’t delay any longer making sure that girls can complete their education, regardless of pregnancy or motherhood.