The government of Qatar should change its laws to end arbitrary censorship of articles about sexual orientation and gender identity and revoke its Penal Code provision that punishes same-sex relations with imprisonment between one to three years, Human Rights Watch said today. Qatar is host of the 2022 FIFA World Cup.

The private publishing partner of The New York Times, Dar Al Sharq, has repeatedly removed articles in the international print edition of The New York Times published in Qatar related to lesbian, gay, bisexual, and transgender (LGBT) rights. The Qatari government tells Human Rights Watch that it was not directly involved in censoring the LGBT articles, indicating that the blank pages are self-censorship based on what a publisher perceives as compliant “with the local cultural standards and expectations.” Censorship of media content because it relates to sexual orientation and gender identity violates freedom of expression when it discriminates against LGBT people.

“The World Cup spotlight is exposing the Qatari government’s homophobia and its failure to counter this troubling climate of self-censorship,” said Minky Worden, director of global initiatives at Human Rights Watch. “Qatari authorities should reform the laws that create a chilling environment for the media and threaten LGBT people with criminal sanctions. If not, FIFA should call a foul.”

FIFA recognizes human rights as central to its operations in Article 3 and 4 of its statutes and its Human Rights Policy. According to FIFA’s Human Rights Policy, discrimination of any kind “is strictly prohibited and punishable by suspension or expulsion.” FIFA now requires countries applying to host the World Cup uphold minimum standards for human rights, including non-discrimination on the basis of sexual orientation.

In recent months, multiple articles about LGBT topics have been censored in the print Doha Edition of The New York Times, including: Larry Kramer’s article For Gays, the Worst is Yet to Come. Again, Elton John’s article, Life on the Margins in LGBT Africa, Shannon Sims’ A Fire Killed 32 at a New Orleans Gay Bar. This Artist Didn’t Forget, and an oped by Worden on LGBT rights and the World Cup. 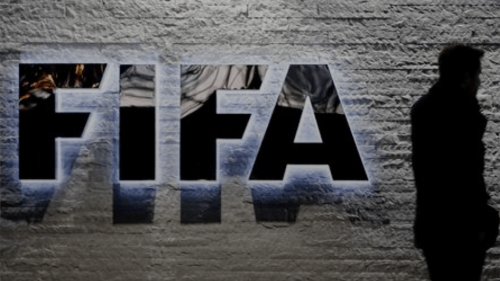 With each deletion, The New York Times publishes a notice that the LGBT text is “exceptionally removed from the Doha edition,” making the censorship clear. The New York Times wrote to Human Rights Watch it has printed and distributed its international edition in Qatar since 2007, and the decision to censor is taken at a local level by the relevant government entities or its independent printing and distribution vendor.

The New York Times told Human Rights Watch approximately “a dozen pieces have been altered or exceptionally removed since April, including references to alcohol, sexuality, and a Delacroix artwork in an advertisement. Where an article is exceptionally removed, we require the publisher to include a citation which includes the full, uncensored title of the piece, and clear signposting to the full article, which will always be available online.” The paper added, “while we understand that our publishing partners are sometimes faced with local pressures, we deeply regret and object to any censorship of our journalism and are in regular discussions with our distributors about this practice.”

The government of the State of Qatar does not directly oversee, control, or limit the publication of The New York Times International Edition in Qatar. As you correctly note, the printing and distribution of international media is done by an independent company in Qatar. While their work is done with no input from the government, all media distributors are expected to comply with the local cultural standards and expectations of their readers and the community. The government is currently examining the issues recently raised around this local distributor, and we will inform you of necessary actions that are taken.

Dar Al Sharq’s Al Mahmoud responded that his company is subject to Qatar’s laws and therefore takes “a general editorial approach that avoids the publishing of anything that may be considered illegal, immoral or contrary to local rules and culture such as pornographic material or any material that could be deemed illegal under the law.”

Homosexual conduct is illegal in Qatar, and there are no anti-discrimination laws or government policies to address discrimination, or state-recognized LGBT organizations. While Human Rights Watch has not documented any prosecutions for same-sex conduct, the law criminalizing same-sex relations is discriminatory and menacing to LGBT people in Qatar.

When Qatar won the right to host the 2022 World Cup in 2010, then-FIFA President Sepp Blatter came under fire from athletes and LGBT fans for his public response to questions about protections for LGBT people: "I would say they should refrain from any sexual activities."

Human Rights Watch said that Qatar’s anti-LGBT laws contribute to stigma and discrimination that is wholly at odds with FIFA’s claims to elevate equality and human dignity.

In response to reporting by ABC news on the censorship in Qatar, the government’s communications office promised to investigate the matter, adding: “The government will examine the issues around the local distributor and take corrective action if needed….. We look forward to people from all over the globe converging on Qatari soil – of different ethnicities, languages, religions, and cultures – uniting through a shared passion for football.”

In Qatar, journalists and printers operate under section 47 of the 1979 Press and Publications law, which bans publication of “any printed matter that is deemed contrary to the ethics, violates the morals or harms the dignity of the people or their personal freedoms.” Qatar is ranked 125 out of 180 on the Reporters Without Borders World Press Freedom Index. In recent years, Qatar has blocked independent news site Doha News, arrested, detained, and interrogated journalists from the BBC, Danish TV, and ARD for reporting and investigations around the World Cup.

On July 2, Human Rights Watch notified FIFA about the blatant censorship of LGBT content in Qatar, which challenges its credibility on press freedom and LGBT rights. FIFA said it is investigating the deletion of LGBT articles.

Since Qatar is hosting the World Cup, it should play by the rules, Human Rights Watch said. FIFA’s Human Rights Policy reads: “Where the national context risks undermining FIFA’s ability to ensure respect for internationally recognised human rights, FIFA will constructively engage with the relevant authorities and other stakeholders and make every effort to uphold its international human rights responsibilities.”

Human Rights Watch calls on Qatar to change its press laws to allow media freedom, revoke its Penal Code provision that punishes same-sex relations, and to affirm that the government will not censor LGBT content and instead recognize it as important to core human rights values.  Human Rights Watch calls on FIFA to “constructively engage” to achieve this outcome in accordance with its policies.

“FIFA knows that discrimination and censorship seriously undermine the sport of football,” Worden said. “Now FIFA should demand that Qatar overturn its anti-LGBT law and uphold media freedom as important conditions of hosting the World Cup.”