(Kyiv) – Ukraine's authorities have not responded adequately to the growing number of violent attacks and threats promoting hate and discrimination in Ukraine by members of violent radical groups, Human Rights Watch said today. In a joint letter to Ukrainian authorities Human Rights Watch and three other international human rights groups said that the authorities should immediately condemn the attacks and carry out effective investigations to hold the assailants accountable.

“Brutal attacks on Roma people, LGBT people, and rights activists have been on the rise in recent months in Ukraine," said Tanya Cooper, Ukraine researcher at Human Rights Watch. “The government has taken little action in response, which cannot but embolden and encourage the attackers.” 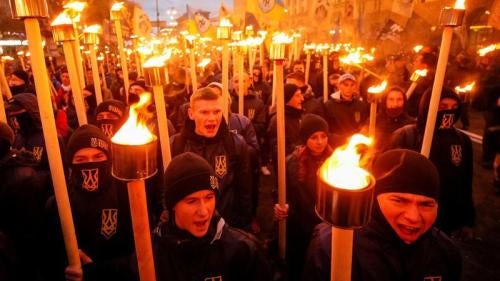 Since the beginning of 2018, members of radical groups such as C14, Right Sector, Traditsii i Poryadok (Traditions and Order), Karpatska Sich and others have carried out at least two dozen violent attacks, threats, or instances of intimidation in Kyiv, Vinnitsa, Uzhgorod, Lviv, Chernivtsi, Ivano-Frankivsk, and other Ukrainian cities. Law enforcement authorities have rarely opened investigations. In the cases in which they did, there is no indication that authorities took effective investigative measures to identify the attackers, even in cases in which the assailants publicly claimed responsibility on social media.

Media reports that some municipal administrations have recruited people from groups that promote hatred and discrimination to conduct “policing activities” during peaceful protests are also a source of concern, the groups said.

While citizen assistance of law enforcement authorities may be compatible with Ukrainian and international human rights law, such volunteers have no greater power or exemptions than ordinary Ukrainian citizens. They do not have the authority to use force in any circumstance and they may not restrain or detain people or confiscate materials, including, for example, flags or banners used at a rally.

Members of radical groups have also routinely tried, and often succeeded, at disrupting public events held by independent groups and threatened the safety of organizers and participants. The most recent examples include the disruption of a public lecture organized by the Ukraine office of Amnesty International in May, and threats in June against Freedom House for organizing a discussion about violence by radical groups that promote hatred and discrimination in Kyiv. The discussion took place without incident.

“Members of radical groups that attack and intimidate people to promote hate and discrimination are breaking Ukraine's law and should be held accountable,” Cooper said. “Ukrainian law enforcement authorities should protect Ukrainians' right to peaceful assembly without fear of obstruction and attacks.”