Two years ago, Shah Marai, a photographer for Agence France Presse, described the pain of living in Kabul, Afghanistan’s capital, with little hope for a better future. “I don’t dare to take my children for a walk,” he wrote.  “All I think of are cars that can be booby-trapped, or of suicide bombers coming out of a crowd.”

His words were tragically prophetic. Shah Marai was one of nine journalists who died today when a bomber posing as a journalist blew himself up in a crowd of first-responders who had arrived on the scene of another suicide attack 20 minutes earlier. The blasts, just days before World Press Freedom Day, occurred near the headquarters of the National Directorate of Security and other government buildings. In all, the twin bombings killed 29 people and injured at least 45, mostly civilians. The Islamic State of Khorason Province (ISKP), the local franchise of the Islamic State, has claimed responsibility.

Threats to Media Freedom in Afghanistan

To attack non-combatants aiding the wounded and dying is an attack on the right to health. Killing journalists is an attack on freedom of expression. Under the laws of war, deliberate attacks on civilians are war crimes. Posing as a journalist to carry out an attack is also perfidious, a war crime in which the attacker assumes civilian status.

Journalists have long paid a high price for covering Afghanistan’s armed conflict. At least 21 journalists and media workers were killed in Afghanistan in 2017, some of them in the same suicide attacks that have also killed and injured so many other civilians – 2,295 last year alone. Mass killings like these take a horrific toll on families and communities, and for the wounded and bereaved, the physical and emotional pain continues long after the news cycle has moved on. 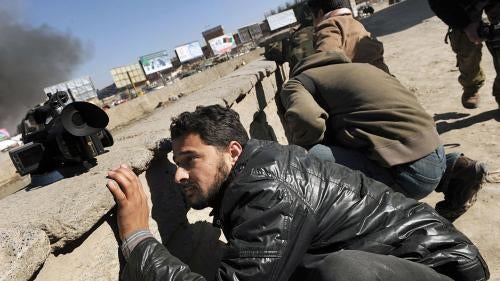 “I don’t see a way out,” Shah Marai said, two years before his untimely death.  “It’s a time of anxiety.” As they return to work tomorrow, Afghanistan’s journalists will surely agree with their fallen colleague.

An earlier version of this dispatch misstated the name of a government agency. The dispatch has been changed to reflect this.