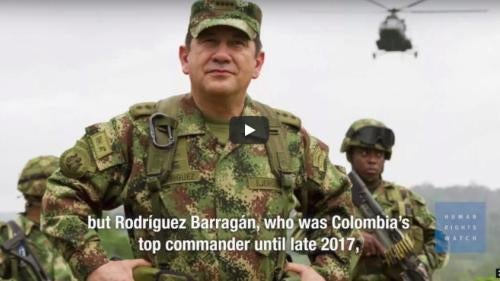 On April 14, the Colombian magazine Semana ran a damning story about a group of senior military officers who it said were involved in corruption and illicit surveillance activities. It indicated that General Juan Pablo Rodríguez Barragán, the country’s then-top commander and now ambassador to South Korea, did not like my insistence on justice for killings of innocent people by the army during its long battle against rebel groups.

So in 2017, Semana said, the general apparently asked other officers to establish cyber surveillance and monitoring on me and discussed ways to censor my tweets.

“General Rodriguez was upset and worried because of some tweets by Vivanco about generals and ‘false positives,’ and the International Criminal Court,” an official said in testimony unveiled by Semana. “So he had Sgt. Henao, whom he trusted, see what could be done with Vivanco, how to counterattack and attack.”

The official was referring to the more than 3,000 civilians murdered by army brigades across Colombia between 2002 and 2008. In cases that came to be known as “false positives,” officials recorded the murder victims as enemies killed in combat and rewarded officers for running up the body count.

The Office of the Prosecutor of the International Criminal Court (ICC) is monitoring proceedings in these cases and if it determines that national authorities are unwilling or unable genuinely to investigate and prosecute them, it could open an investigation.

General Rodríguez Barragán has reason to be concerned about our insistence on justice. As Human Rights Watch has shown, he played a prominent role in several military units involved in the atrocious “false positive” crimes. He commanded the 4th brigade from 2006 to 2008 in Antioquia, where, according to the Attorney General’s Office, soldiers under his watch apparently killed at least 28 civilians.

One of them was “Orlando González” (we use a pseudonym due to security concerns), a farmer with mental disabilities. Soldiers murdered him in March 2008 and reported him as a guerrilla fighter of the Revolutionary Armed Forces of Colombia (FARC). General Rodríguez Barragán signed several documents which Human Rights Watch has reviewed certifying a payment to an informant who supposedly provided information that led to the operation in which González was killed. However, when interviewed by prosecutors, the alleged informant said that he was living elsewhere and had never provided evidence to the army. As in dozens of other “false positives,” evidence suggests that the 4th brigade under General Rodríguez Barragán fabricated evidence to make the murder of González appear to be a legal combat casualty.

Human Rights Watch has shown that pressure on troops to report results in combat —and the rewards —created a perverse incentive to kill. General Rodríguez Barragán seems to have heightened the pressure on his troops. Robison Gonzalez del Rio, a colonel of the 4th brigade who confessed to many killings, told prosecutors in 2014 that the “operations were set up” because Gen. Rodríguez Barragán “every day was asking for results….for him [arrests] were not results; for him the results were combat kills.”

That testimony triggered a preliminary criminal investigation against General Rodríguez Barragán. But like most other cases involving army generals, it has stalled.

While hundreds of middle and mostly low-level officers have been held accountable for the wanton murders, prosecutors have not convicted a single army general for “false positives.”

The Colombian government needs to send a clear message that it will not help senior officers escape justice. The government should replace General Rodríguez Barragán in South Korea. Most important, the Attorney General’s Office should take decisive steps to investigate, and, when warranted, to prosecute   top officials facing serious allegations of “false positives.”