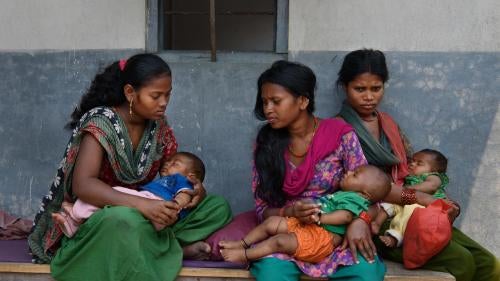 Before embarking on a five-nation tour of Africa this week, US Secretary of State Rex Tillerson acknowledged the link between women’s health and economic and social development as he lauded Washington’s massive global health fund, PEPFAR, for how it had “transformed the global HIV/AIDS response,” saying that “ … nowhere is this more evident than in Africa.”

As the largest global donor on global health, the US has supported many programs that help people get healthcare in some of Africa’s poorest countries. But President Donald Trump has also expanded the “Global Gag Rule” beyond any previous US administration – which threatens to undermine decades of progress on women’s health and undermine gender equality.

On his first working day in office, Trump reinstated and dramatically expanded the Mexico City Policy – also known as the “Global Gag Rule,” which conditions US funding for global health programs on a commitment from foreign nongovernmental organizations that they will not promote or provide abortions, even with non-US funds, except in cases of rape, incest or to save a woman’s life.

Trump’s dramatic expansion applies to all US global health funding rather than family planning funds alone, as in past Republican administrations. On Tillerson’s watch, the new restrictions also affect funding for maternal and child health, nutrition, HIV and AIDS (including PEPFAR), prevention and treatment of diseases including tuberculosis and malaria, and even some water, sanitation, and hygiene programs.

Research by Human Rights Watch in Uganda and Kenya, which rely heavily on US health funds to combat high maternal mortality rates and the HIV epidemic, and research by other groups suggest profoundly harmful impacts. The policy has already led to cuts in key sexual and reproductive health services; experts also fear an increase in unsafe abortions due to reduced family planning services.

Tillerson traveled on International Women’s Day, an important time to remind him that African women’s lives matter. The new policy will harm many women and girls, who are fundamental to Africa’s progress and security – which Tillerson has repeatedly said are top priorities for this trip.