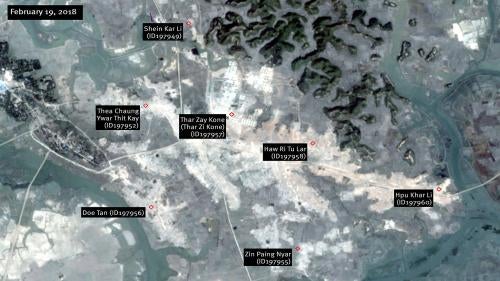 (Rangoon) – New satellite imagery reveals the Burmese government has been bulldozing scores of depopulated Rohingya villages in northern Rakhine State, Human Rights Watch said today. The United Nations Security Council, the UN and its agencies, and Burma’s donors should demand the Burmese government immediately halt the demolition of Rohingya villages, which should be treated as crime scenes that should be preserved until the UN Fact-Finding Mission is given access to the area to carry out investigations.

Since late 2017, the Burmese government has cleared at least 55 villages of all structures and vegetation using heavy machinery. Most of these villages were among the 362 villages completely or partially destroyed by arson since August 25, 2017, during the security forces’ ethnic cleansing campaign against the Rohingya. However, the satellite images show that at least two of the villages demolished were previously undamaged by fire and likely inhabitable. Hundreds of buildings have been demolished in 10 other villages partially destroyed by arson.

“Many of these villages were scenes of atrocities against Rohingya and should be preserved so that the experts appointed by the UN to document these abuses can properly evaluate the evidence to identify those responsible,” said Brad Adams, Asia director. “Bulldozing these areas threatens to erase both the memory and the legal claims of the Rohingya who lived there.”

Human Rights Watch reviewed a time series of satellite imagery recorded between November 11, 2017, and February 19, 2018. The images show that two villages in the Myin Hlut village tract that were not burned in the late 2017 attacks were intact prior to being bulldozed. Between January 9 and February 13 they were destroyed and smoothed over by heavy machinery. Human Rights Watch could not independently verify if any of the destroyed villages were inhabited when the demolition began. Satellite imagery reviewed by Human Rights Watch suggests that the demolitions are ongoing.

The satellite images show that the initial demolition of heavily damaged or destroyed buildings in northern Rakhine State began in Maungdaw town in November 2017. This was followed by a pause of approximately one month. In early January 2018, clearance operations resumed in villages south of Maungdaw town along the coast, and then rapidly spread northward from where the demolition began.

On January 12, Burmese state media reported that eight backhoes and four bulldozers had begun clearing areas of northern Rakhine State on January 7 in locations where the government had announced repatriated refugees from Bangladesh would be processed and temporarily located. State media and the Office of the President have also reported construction in several areas across Rakhine State, some of which has been focused on road improvements and has involved clearing villages.

The State Counsellor Office Information Committee said on December 1 that the government had built houses in over 20 villages across Rakhine State. Win Myat Aye, the social welfare minister, was quoted in Agence-France Press on February 12 stating that the bulldozing of villages was part of a plan to rebuild villages to a higher standard. He said that the government was “trying to have the new village plan,” and that “when [the refugees] come back they can live in their place of origin or nearest to their place of origin.”

Government development efforts are being led by the Union Enterprise for Humanitarian Assistance, Resettlement and Development (UEHRD), which was formally established in October 2017, and is chaired by Burma’s de facto leader Aung San Suu Kyi. The UEHRD coordinates with several national-level ministries, state and regional governments, and security forces, as well as private companies. It has solicited cooperation from national and international organizations, so-called partner nations, and UN agencies.

The government has said that it will develop village plans based on the UN International Guidelines on Urban and Territorial Planning and other international guidelines.

Aung Tung Thet, chief coordinator for the UEHRD, told local media in October that because the monsoon season begins in April, there is “little time to complete this work,” referring to development projects in northern Rakhine State. As a result, he said, “We must implement this project with great momentum.”

Since militant attacks last August on dozens of security posts, the Burmese military has committed widespread killings, rapes, arbitrary arrests, and mass arson in hundreds of predominantly Rohingya villages in northern Rakhine State, forcing more than 688,000 Rohingya to flee to neighboring Bangladesh. The governments of Burma and Bangladesh have concluded several agreements that outline the intention and process by which refugees in Bangladesh could be returned to Burma. However, no refugees have returned to Burma, and Rohinyga continue to flee from Rakhine State. During a briefing to the UN Security Council on February 13, the UN high commissioner for refugees, Filippo Grandi, stated, “Conditions are not yet conducive to the voluntary repatriation of Rohingya refugees.”

International law provides that refugees and internally displaced persons who were arbitrarily or unlawfully deprived of their homes, lands, properties, or places of habitual residence have the right to return to their place of residence or choice, and the return of their property. Those unable or unwilling to return to their homes have the right to choose compensation from the government for their loss of homes and property.

Any bulldozing of villages that has destroyed evidence of crimes is apparent obstruction of justice. The Burmese government has failed to credibly investigate serious alleged abuses committed by security forces since August 25, which Human Rights Watch has found amount to crimes against humanity.

A Burmese military investigation concluded in November that no violations or abuses were committed by security forces, contrary to information reported by the UN, media outlets, and human rights groups, including Human Rights Watch. Following the discovery of a mass grave in the village of Inn Din in late December, the Burmese military admitted that members of the security forces and Rakhine villagers had unlawfully killed 10 men and violated the “rules of engagement.” The government has arrested 16 people in connection with the massacre, and says it will “take action according to the law.”

The Burmese government has refused to grant visas to the UN Fact-Finding Mission, which was created by the Human Rights Council in March 2017, preventing it from collecting evidence in affected areas of northern Rakhine State. Furthermore, it has effectively blocked all independent media and human rights groups from gaining meaningful access to northern Rakhine State.

“The government’s clearing of dozens of villages only heightens concerns about Rohingya families being able to return home,” Adams said. “Deliberately demolishing villages to destroy evidence of grave crimes is obstruction of justice. Donor governments should ensure they don’t provide any direct or indirect support that would hamper justice or assist those responsible for ethnic cleansing in their efforts to pretend the Rohingya do not have the right to return to their villages in northern Rakhine State.”