The buzzwords “bloodless,” “transparent,” and “accountability” are being deployed by Philippine National Police Director General Ronald dela Rosa and his colleagues in a bid to rebrand President Rodrigo Duterte’s murderous “war on drugs” with a veneer of lawfulness.

The relaunch lifts a suspension of police anti-drug operations that the government imposed in October after mass protests in response to the alleged summary execution by police of 17-year-old Kian Loyd delos Santos. However, the police admitted last week that despite that suspension, officers killed 46 suspected “drug personalities” between December 5 and February 1.

Dela Rosa won’t dwell on the “drug war” death toll. He prefers an upbeat narrative of vows that the police “aren’t hiding anything” and commitments to equip police with body cameras and even to allow “human rights advocates” to accompany police on anti-drug operations. 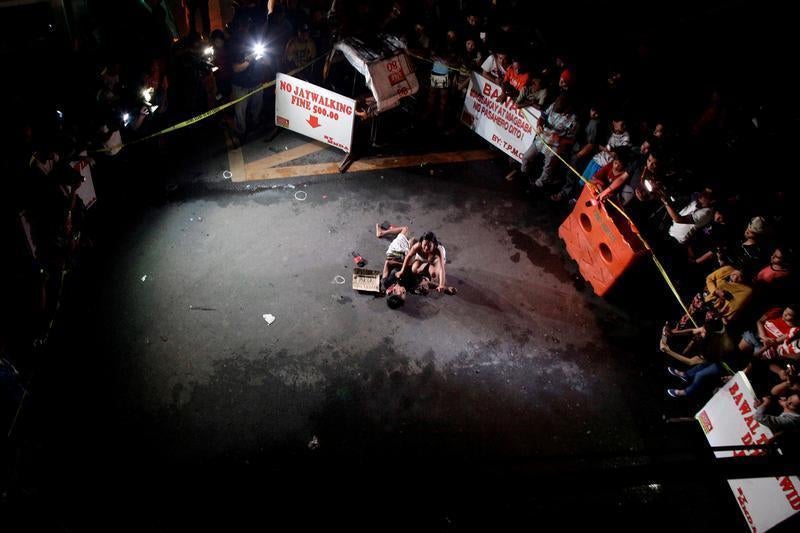 He portrays a future anti-drug campaign spearheaded by police brandishing Bibles and rosaries rather than pistols and assault weapons.

That strain of magical thinking appears to be contagious. Last week, James Walsh, a US State Department official overseeing American police on international narcotics and law enforcement, said the conduct of the Philippine National Police indicated that “we are seeing some of our human-rights training working.” Walsh didn’t comment on the drug war’s steadily mounting death toll or its near-total absence of accountability.

Dela Rosa likewise won’t discuss accountability. Instead he makes vague promises that the anti-drug campaign’s “mistakes of the past will not be repeated.” And he attributes any allegations of unlawful conduct by police personnel to a minority of “scalawags” in the ranks.

That rhetoric is part of a multi-pronged government disinformation effort of denial and distraction to deflect growing evidence that many of the killings have been extrajudicial executions that dela Rosa, Duterte, and senior government officials have actively incited and instigated. It ignores damning evidence of police involvement in extrajudicial killings linked to the “drug war” documented by Philippine journalists, foreign correspondents and international human rights organizations over the past 18 months.

The rare exception to the lack of accountability for “drug war” killings was the move by prosecutors on January 30 to file murder charges against three police officers implicated in the death of delos Santos. The handful of previous prosecutions of police personnel implicated in drug war killings have not resulted in convictions.

Instead, the police and the Duterte government have in effect institutionalized impunity for police involvement in summary killings. Dela Rosa has dismissed calls for independent investigation into police drug-war killings as “legal harassment” and said that the demand “dampens the morale” of police officers. In August, Duterte vowed to pardon and promote any police personnel implicated in unlawful killings.

The government has also hobbled public pressure to provide accountability for the killings by subjecting critics of the government’s “drug war” narrative to withering harassment, intimidation or worse. Targets have included the official Commission on Human Rights, United Nations officials, and Senator Leila de Lima. On February 24, 2017, after a relentless government campaign against her, police arrested de Lima on politically motivated charges – she has remained in detention ever since.

Last month, the government ratcheted up its attack on domestic media outlets that have exposed police involvement in “drug war” abuses by threatening to shut down the Rappler.com media platform by revoking its operating license. Duterte and his supporters have also targeted the news channel ABS-CBN as well as the Philippine Daily Inquirer, both known for their in-depth investigative reporting.

The efforts of Duterte administration and Philippine National Police officials to whitewash their culpability in thousands of “drug war” deaths underscore the need for a United Nations-led investigation into those killings.

Last year the government ignored two joint statements by UN member states led by Iceland that urged Manila to “take all necessary measures to bring these killings to an end” and to “cooperate with the international community to pursue appropriate investigations into these incidents.”

It’s critical for the UN Human Rights Council to adopt a resolution creating an investigatory body to undertake steps toward accountability that the Duterte government refuses to make.