With 10 days to go until winter officially begins, the forecast on Mytilene predicts rain on six of them, driving winds, and temperatures as low as 4 degrees Celsius. No child deserves to sleep out in the cold, exposed to rain, snow, and freezing wind. Yet that is exactly the situation for thousands of kids on the Greek islands this year.

The asylum-seeking children are stuck on Greece’s island hotspots  – EU-sponsored facilities holding thousands of them in deplorable conditions. 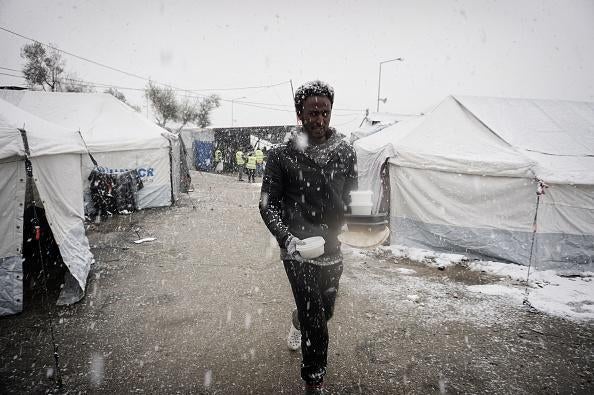 Kids and their families have no choice but to sleep in summer tents, risking both their physical and mental health. Unrest in the overcrowded facilities, coupled with bad conditions, means that kids living in the hotspots for prolonged periods, particularly unaccompanied children, experience high levels of stress, and can undergo depression and self-harming.

Hundreds of children stuck on island hotspots also remain out of school, missing out not just on an education, but also the sense of normalcy that a school routine can bring.

The purported justification for this inhumane containment policy is that allowing people to move to the mainland, where conditions are better and kids can go to school, would undermine the flawed EU migration deal with Turkey, and encourage others to come to the islands by boat.

Deterrence cannot justify deliberately exposing children and other vulnerable people to these conditions.

Last winter, five asylum seekers, including a child, died in the miserably cold Moria camp on Lesbos. That camp, with a capacity of 2,300 people, is now home to more than 6,500 children, women, and men.

Greece’s Prime Minister, Alexis Tsipras, has been repeatedly warned of the deteriorating situation on the islands, and Human Rights Watch and other groups are calling on the government to move asylum seekers to better conditions on the mainland by December 21, the official start of winter, and end Greece’s containment policy once and for all.

Last week, Greek authorities promised to move 5,000 people to the mainland by December 15. It’s not clear how many of them will be children. It’s an important start but more is needed, including support from other EU governments, to make sure that no kid spends the winter in freezing tents.