Dr. Eva Duarte has spent more than a decade helping people with advanced cancer through their final months. Even now she cries as she recalls how some of her patients spent their last days.

“There was a man, Carlos, I will never forget him,” she says. “His wife was pregnant all through his treatment. He had advanced colon cancer. In his last months, he taught her how to run the business, how to look after the money. He knew he would never see his son grow up. We cried a lot together. At the end, he looked at her and said, ‘Hug me I’m going.’ He just said goodbye and left. He was so brave.”

Carlos was one of her luckier patients. Although he was poor and could not afford pain medicine – the government only covers the costs for patients staying in government-funded hospitals – Duarte found a donor to pay for his opioids. This allowed him to function during those last few months, giving both his knowledge and his attention to his family. 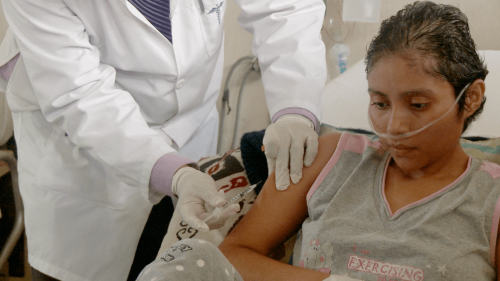 Many of Duarte’s cancer patients aren’t so lucky. They pass their last weeks in terrible pain, unable to spend quality time with those they love most, forced to choose between being able to get pain relief in a hospital, often many miles from home, or staying with their families.

In a new report, “Punishing the Patient: Ensuring Access to Pain Treatment in Guatemala,” Human Rights Watch looks at the struggles doctors in Guatemala face to give patients with life-threatening illnesses access to pain killers like morphine. Each year, an estimated 22,000 Guatemalans experience advanced, chronic illnesses including cancer, heart, lung, or renal disease, and HIV/AIDS – all of which can come with significant pain.

Illicit drugs have long flowed through Guatemala. The government’s measures to counter drug trafficking, however, have made it extremely hard for patients with advanced illnesses to get relief from their suffering. Morphine and other opioids are difficult for doctors to prescribe.

“In any war, you have unintended victims and in the war on drugs the collateral damage is the people with pain that needs to be treated,” Duarte said.

Duarte founded the Palliative Care Unit of Guatemala’s National Cancer Institute, a health service that includes pain treatment and focuses on improving the quality of life for people with serious illnesses. For her, the emotionally draining work of palliative care is even harder because the unit struggles to provide its patients with morphine and other necessary pain relief.

One patient facing this problem told Human Rights Watch researchers that she thought the pain would kill her before her illness did.

The red tape doctors and patients face is daunting. Doctors have to fill out the prescription in triplicate and on a special pad, which they say is not easy to get. Patients have to get the prescription authorized with a seal and signature from an office in the capital.

And since some pharmacies in Guatemala City are the only ones that stock opioids, people in rural areas have to get to a hospital or pharmacy that stocks them. Some patients brave bumpy bus journeys of up to seven hours one way through the mountainous country to get there.

Often patients are too ill to travel, so their caregivers have to make the trip – meaning they also have to take time off work. That makes it more difficult to afford the medicines, which aren’t subsidized by the government if the patient isn’t staying in a public hospital.

Duarte says that doctors can shy away from even issuing the prescriptions. The Ministry of Health keeps records of these prescriptions in its narcotics office, and doctors can find themselves and their practices under scrutiny if they are thought to be issuing too many.

“When I started in the hospital, the pharmacist didn’t allow me to prescribe more than a certain number of ampules [containers of injectable medicine] a month,” Duarte says. “This number was ridiculous. The pharmacist told me if she reported more consumption she would have troubles with the Ministry of Health.”

The ministry did get involved. It made Duarte sign a “commitment letter” that meant the morphine she was administering was carefully monitored.


Guatemala’s palliative care providers, dedicated to giving their patients the best possible care, struggle to do this while working within the law. But they have figured out some work-arounds.

Because the rules against administering pain medication are less harsh for patients staying in a hospital, doctors would classify some as inpatients, even if they were not staying overnight.

For people living far away, many doctors carry their own supply and lend patients enough morphine to ease the burden of chronic pain through the weekend, when they can’t get medication from pharmacies, hoping to cut down on midnight phone calls from pain-wracked patients.

After her first year of house calls, Duarte knew to always keep a small supply of morphine with her, even though this wasn’t allowed.


She would then leave a few days’ supply for a patient in pain, on the understanding that they would give her back the same number of ampules when they managed to fill the prescription she gave them.

Some doctors even resorted to taking leftover prescriptions after a patient died and using them to help the living.

“I never sold medicines to patients, because it is not allowed here, but many physicians do it, and I don’t judge them, because when you have a patient in pain what can you do?” she said. “The system pushes us to do things like that.”

For Duarte, working in palliative care in a county that does not understand its importance has taken an emotional toll. She recently left to join a private hospital, where she founded a Palliative Care Unit that had much better resources, allowing her to see her children and to work set hours.

“I was recovering my life,” she said.

Duarte spent years explaining to other doctors why they should refer patients with advanced illnesses to her center, and the need for psychological intervention. She also met daily with families and patients. Her work was draining, yet ultimately rewarding.

When people have serious illnesses, she said, they “have to deal with every possible suffering all at the same time – physical, mental, economical, spiritual. Everything, and you are just a doctor.”

Ultimately, she wants her patients to have the necessary pain medicine so they have a better chance of passing away as Carlos did – at peace and with his family.