For several weeks now, a brutal campaign against LGBT people has been sweeping through Chechnya. Law enforcement and security agency officials under control of the ruthless head of the Chechen Republic, Ramzan Kadyrov, have rounded up dozens of men on suspicion of being gay, torturing and humiliating the victims. Some of the men have forcibly disappeared. Others were returned to their families barely alive from beatings. At least three men apparently have died since this brutal campaign began.

This chilling information was first publicised by Novaya Gazeta, a leading independent Russian paper. Their report came out on 1 April, prompting the spokesperson for Chechnya’s Interior Ministry to dismiss it as an “April fools’ joke.” Kadyrov’s press secretary immediately described the report as “absolute lies and disinformation,” contending that there were no gay people in Chechnya and then adding cynically, “If there were such people in Chechnya, law-enforcement agencies wouldn’t need to have anything to do with them because their relatives would send them somewhere from which there is no returning.”

The information published by Novaya Gazeta is consistent with the reports Human Rights Watch recently received from numerous trusted sources, including sources on the ground. The number of sources and the consistency of the stories leaves us with no doubt that these devastating developments have indeed occurred. LGBT Network in Russia opened a special hotline to provide emergency support to those who find themselves in immediate danger.

In light of brutal repression in Chechnya, we cannot reveal our sources for fear of compromising their security. The fear of devastating reprisal is so intense that we cannot even provide detail on specific cases as the victims could suffer even more as a result of the exposure. 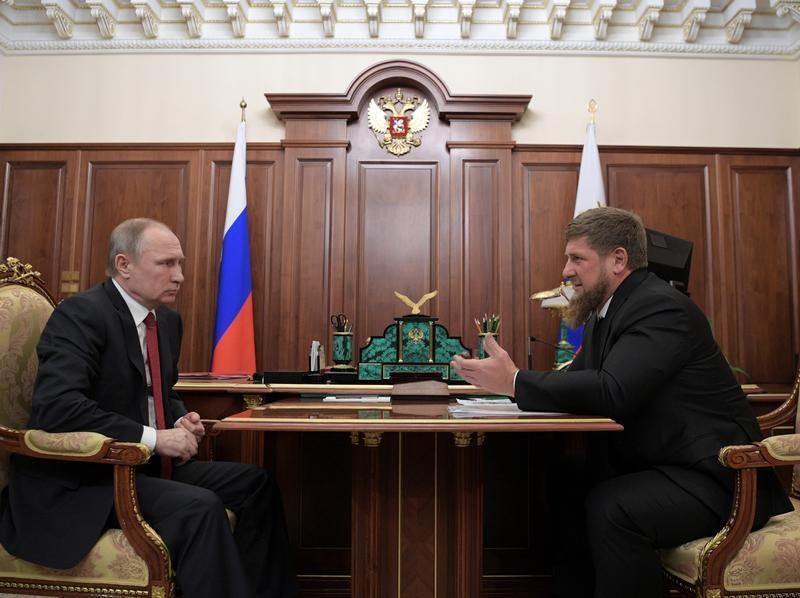 On Monday, 3 April President Putin’s spokesman, Dmitry Peskov, stated that the Kremlin was previously not aware of the situation, but that law enforcement authorities would look into these media reports. On the one hand, this seems like good news, a signal to investigative officials to run a check promptly. On the other hand, Peskov also suggested that people who supposedly suffered from abuses by law enforcement officials should “file official complaints” and “go to court” without indicating what, if anything, Russian authorities are planning to do to protect them.

These days, very few people in Chechnya dare speak to human rights monitors or journalists even anonymously because the climate of fear is overwhelming and people have been largely intimidated into silence. Filing an official complaint against local security officials is extremely dangerous, as retaliation by local authorities is practically inevitable.

Human Rights Watch documented numerous cases in recent years showing just what fate awaits people in Chechnya who do what Peskov has suggested. For this reason, with very few exceptions, victims of torture and other horrific abuses refrain from seeking justice or withdraw their complaints as a result of threats, including death threats and threats of retaliation against family members.

It is difficult to overstate just how vulnerable LGBT people are in Chechnya, where homophobia is intense and rampant. LGBT people are in danger not only of persecution by the authorities but also of falling victim to “honour killings” by their own relatives for tarnishing family honor.

So it is particularly disappointing that the Kremlin spokesman should tell the victims to use official channels to complain, without saying a word about any security guarantees. Without solid security guarantees, victims and witnesses cannot possibly come forward, and there is no chance that an effective investigation could take place.

Surely Russian authorities can do better than that. At the highest level, they should resolutely condemn attacks against LGBT people in Chechnya and ensure safety and justice for the victims.