Saudi Arabia, as the leader of the nine-nation coalition that began military operations against the Houthis in Yemen on March 26, 2015, has been implicated in numerous violations of international humanitarian law. Human Rights Watch and Amnesty International have documented 69 unlawful airstrikes by the coalition, some of which may amount to war crimes, killing at least 913 civilians and hitting homes, markets, hospitals, schools, civilian businesses, and mosques. The two organizations have also documented 19 attacks involving internationally banned cluster munitions, including in civilian areas. Saudi Arabia should be suspended from the Human Rights Council until it ends unlawful attacks in Yemen and conducts credible investigations that meet international standards or agrees to and cooperates with an independent international inquiry. 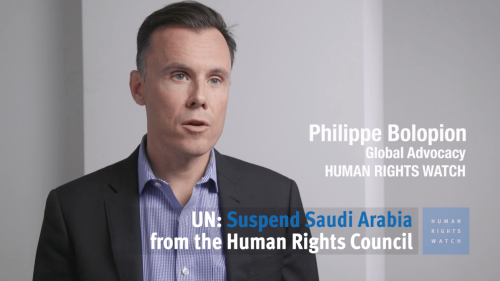 “Saudi Arabia has amassed an appalling record of violations in Yemen while a Human Rights Council member, and has damaged the body’s credibility by its bullying tactics to avoid accountability,” said Philippe Bolopion, deputy director for global advocacy at Human Rights Watch. “UN member countries should stand with Yemeni civilians and suspend Saudi Arabia immediately.”

UN institutions have repeatedly denounced violations by the Saudi-led coalition, as well as by the Houthi forces and their allies. In 2015, UN Secretary-General Ban Ki-moon found the coalition responsible for 60 percent of recorded child deaths and injuries, and nearly half of 101 attacks on schools and hospitals. In March, the UN high commissioner for human rights, Zeid Ra’ad Al Hussein, stated that the coalition was responsible for twice as many civilian casualties as all other forces put together.

Earlier in 2016, Human Rights Watch and Amnesty International called for the United States, United Kingdom, and France to suspend all weapons sales to Saudi Arabia until it curtailed its unlawful airstrikes in Yemen and credibly investigated alleged violations.

Saudi Arabia has strongly resisted all accountability measures, the two groups said. After threatening to withdraw funding from critical UN programs, Saudi Arabia in June compelled the UN secretary-general to remove the coalition from his “List of Shame” for killing and maiming children and attacking schools and hospitals in Yemen. In 2015, Saudi Arabia used its position on the Human Rights Council, aided by its allies, to obstruct the creation of an independent international investigation into alleged violations by all sides. Neither Saudi Arabia nor a national Yemeni commission of inquiry has carried out credible investigations into coalition attacks that may have been laws-of-war violations. Allowing Saudi Arabia to obstruct independent scrutiny and avoid accountability threatens the credibility of both the Human Rights Council and the General Assembly, Human Rights Watch and Amnesty International said.

Since Saudi Arabia joined the Human Rights Council in January 2014, its crackdown on all forms of dissent at home has continued unabated, executions have surged, and discrimination against women and the Saudi Shia minority community remains systematic and entrenched.

“As the Human Rights Council commemorates its tenth anniversary, it should be recommiting to accountability, not allowing countries that commit gross and systematic abuses to remain members,” said Bolopion. “The General Assembly’s failure to suspend Saudi Arabia could seriously harm the rights council’s credibility.”