The 102-page report, “Justice on Trial: Lessons from the Minova Rape Case in the Democratic Republic of Congo,” shows how, despite massive international support and attention, the so-called Minova rape trial failed to deliver justice for either the victims or the accused. The report describes the military justice system’s response to the rape of at least 76 women and girls by retreating army troops who rampaged through the small market town of Minova and neighboring villages in eastern Congo in November 2012.

“The Minova rape trial was a huge disappointment for victims of one of the worst mass rapes in the country in recent years,” said Géraldine Mattioli-Zeltner, international justice advocacy director at Human Rights Watch. “The Congolese authorities owe it to victims of grave abuses to learn the lessons from this case and to deliver genuine justice in future cases.”

A strong public outcry over the mass rape in Minova led to the indictment and trial in a military court of 39 soldiers on charges of war crimes – rape and pillage – and violating military orders. But when the trial was completed five months later, only two low-level soldiers had been convicted of rape. The vast majority of rank-and-file soldiers were convicted of pillage despite weak evidence and other fair trial concerns. High-level commanders with overall responsibility for the troops in Minova were never charged. The judges ordered reparations to be paid by the Congolese state to the victims of rape, pillage, and of one murder, but these have not been disbursed.

The prosecution’s case was weak due largely to a shortage of legal expertise in handling a complex mass crime scene and sexual violence, the absence of a strategy to gather evidence, and prosecutorial errors, Human Rights Watch said. The selection of mostly low-ranking defendants by the military prosecutors cast doubt on the army’s willingness to hold those most responsible to account. Some of the rank-and-file soldiers convicted of pillage had weak legal representation, made worse by the absence of a right under Congolese law to appeal the verdict before the type of military court that heard the case. 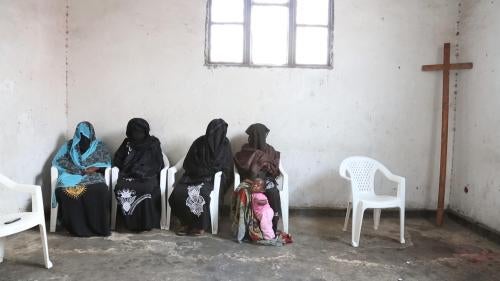 The problems that emerged in the Minova trial are emblematic of the deficiencies of Congo’s military justice system in dealing with grave international crimes that persist despite years of international assistance, Human Rights Watch said.

“Untangling a command structure and pursuing those with command responsibility requires special expertise and political courage, both of which were in short supply in the Minova case,” Mattioli-Zeltner said.

Human Rights Watch identified some positive aspects in the handling of the Minova case. The government made funds available for the trial, judges and prosecutors directly applied the Rome Statute of the International Criminal Court (ICC) to compensate for gaps in domestic law, and strong diplomatic pressure helped ensure the case went to trial. The protection and participation of victims and witnesses, a significant challenge for trials of grave international crimes held in conflict zones, benefitted from extensive international support. Thanks to the assistance of nongovernmental organizations, rape victims had access to psychologists during the investigations and at trial. But these positive elements were not enough to ensure that the trial brought justice to the victims, Human Rights Watch said.

Congo has brought an increasing number of prosecutions for war crimes and crimes against humanity over the past 10 years, with about 30 cases tried before military courts. The Minova trial benefitted from this experience and from projects implemented by international partners and by the United Nations peacekeeping mission in Congo to strengthen the capacity of the military justice system to tackle impunity for grave crimes.

The Minova trial, however, showed that the quality of the judicial proceedings – not just their number – needs to be closely examined, and improved. The Congolese authorities and international partners still have work to do to address the challenges that hinder meaningful justice for human rights violations, Human Rights Watch said.

Human Rights Watch made a number of recommendations to the Congolese government. These include creating a national specialized investigation cell to centralize and build expertise of national justice staff to handle serious crimes, including sexual violence; adopting pending reforms to improve the legal framework, including a law to implement the Rome Statute of the ICC; improving the fair trial rights of defendants; and pursuing avenues to enhance the independence and impartiality of the justice system. To improve accountability for sexual violence specifically, Human Rights Watch recommended the use of improved forensic forms by health centers treating rape victims, the hiring and training of female investigators and prosecutors, and the inclusion of sexual violence incidents in a national prosecutorial strategy.

The government’s proposal to establish a temporary internationalized justice mechanism involving both national and international judicial staff within the national justice system remains critical to bolster specialized expertise and shield proceedings from interference.

In 2004, the ICC opened an investigation into abuses committed in Congo. The ICC’s investigation has led to two convictions, one acquittal and one ongoing trial. One ICC suspect is still evading justice. The ICC can only investigate crimes after 2002 and even then its work will only yield a handful of cases, Human Rights Watch said.

“The ICC’s cases in Congo are vital, but they only scratch the surface in addressing the impunity that has persisted in Congo for decades,” Mattioli-Zeltner said. “The Congolese government should do more to support the delivery of credible justice to victims and send the message that no one is beyond the law’s reach.”