By Friday morning, the bodies of 284 miners had been recovered from the fire at the Soma mine in western Turkey, with the death toll likely to rise to over 300 in the coming days. Turkey is a world leader in mining fatalities, particularly in the coal sector, as research by the Turkish think-tank TEPAV shows, and this is the worst mining disaster in the country’s history.

At a chaotic and heated press conference broadcast live on Turkish TV on Friday morning, the mine owner and managers stated there was an ongoing investigation into the cause of the deadly fire. While simultaneously insisting there was no negligence involved, they admitted that the mine currently lacked functioning emergency safe rooms where miners could seek shelter but that the regulations anyway did not require there to be.

The government response has been in turns defensive and angry. While pledging a full investigation leaving no stone unturned, Prime Minister Recep Tayyip Erdoğan’s Wednesday statement seemed to normalize the tragedy saying that mining accidents are “in the nature of the job” and offering a Wikipedia-style list of historical mining accidents reaching back to the mid-nineteenth century, as though admitting that labor conditions in Turkey in 2014 resemble Victorian Britain.

The Prime Minister did not raise the need for due diligence by companies or pledge to strengthen inspection mechanisms. Nor did he commit to the government authorities taking every step to prevent such accidents in the workplace in the future and address Turkey’s very poor record, or explain why the MPs from the ruling party had blocked a call by opposition parties last month for an inquiry into safety at the Soma mine. 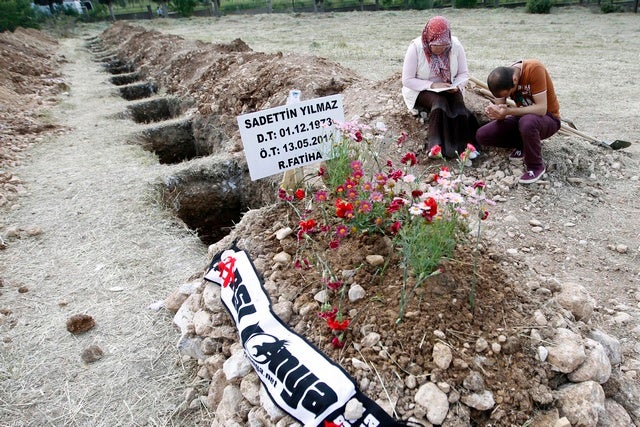 Public anger about the deaths and the government’s botched response has spilled into protests throughout the country which again have been met with police dispersing demonstrators with water cannon and teargas, by Friday afternoon even in Soma.

The ruling party’s spokesman Hüseyin Çelik seemed on Friday to defend Erdoğan’s aide Yusuf Yerkel, who was photographed kicking a protestor who had been tackled to the ground by police in Soma.

Citizens have a right to demand accountable government and governments have a duty to enforce health and safety rights in the workplace and to hold private companies accountable for deaths arising from negligence - these are principles the Justice and Development Party (AKP) has yet to acknowledge in this tragedy.

Photo: Relatives of a miner mourn beside his grave after a mining disaster in Soma, Turkey, May 16, 2014. At least 284 people died.