(London) – Syrian government and pro-government forces executed at least 248 people in the towns of al-Bayda and Baniyas on May 2 and 3, 2013, Human Rights Watch said in a report released today. It was one of the deadliest instances of mass summary executions since the start of the conflict in Syria.

The 68-page report, “‘No One’s Left’: Summary Executions by Syrian Forces in al-Bayda and Baniyas,”is based oninterviews with 15 al-Bayda residents and 5 from Baniyas, including witnesses who saw or heard government and pro-government forces detain and then execute their relatives.Working with survivors and local activists, Human Rights Watch compiled a list of 167 people killed in al-Bayda and 81 in Baniyas. Based on witness accounts and video evidence, Human Rights Watch determined that the overwhelming majority were executed after military clashes ended and opposition fighters had retreated. The actual number of fatalities is probably higher, particularly in Baniyas, given how difficult it is to access the area to account for the dead.

“While the world’s attention is on ensuring that Syria’s government can no longer use chemical weapons against its population, we shouldn’t forget that Syrian government forces have used conventional means to slaughter civilians,” said Joe Stork, acting Middle East director at Human Rights Watch. “Survivors told us devastating stories of how their unarmed relatives were mowed down in front of them by government and pro-government forces.”

The Syrian government acknowledged its military operations in al-Bayda and Baniyas but said that its forces had killed only “terrorists.” Ali Haidar, minister of state for national reconciliation affairs, told the Wall Street Journal that “mistakes” may have been committed in the operations and that a government committee was investigating. But he also said that the government was forced to act to deny rebels a foothold in a part of Syria that many considered the heartland of the Alawites.

Summary Executions by Syrian Forces in al-Bayda and Baniyas

Over the next three hours, the forces entered homes, separated men from women, rounded up the men of each neighborhood in one spot, and executed them by shooting them at close range. Human Rights Watch also documented the execution of at least 23 women and 14 children, including infants. 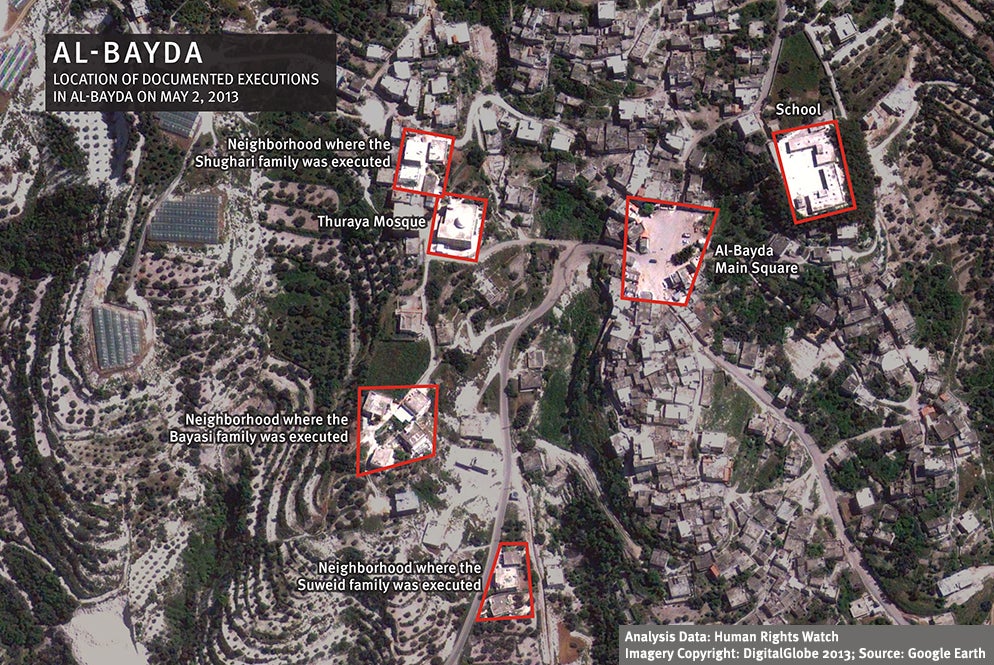 One witness in al-Bayda described how government soldiers entered her home, took her husband, his three brothers, and a neighbor, to the next-door apartment and executed them:

Suddenly we heard gunshots. I started screaming to my father-in-law, “The men are gone, Abu Muhammad, the men.” I ran to the window and saw around 20 soldiers leave the apartment next door. As soon as they left, we broke out of the apartment where they had left us and rushed to the apartment where they had taken the men. I first saw my husband’s body by the door. Then I found Sa`id’s body in the hallway. The remaining three were in a room on top of each other. Each of the men had three bullets in him.

The next day, in a pattern closely resembling events in al-Bayda, witnesses told Human Rights Watch that after storming Ras al-Nabe`, a neighborhood in Baniyas, government forces and pro-government militias executed dozens of residents.

In some cases, government and pro-government forces executed, or attempted to execute, entire families in the two towns. Three local residents who found the bodies after the forces had left al-Bayda, said that they executed all the members of one of the branches of the Bayasi family who were in their homes on May 2 – at least nine men, three women, and fourteen children –with the exception of a 3-year-old girl who they said was wounded by three bullets but survived.

One of the first responders to find the Bayasi bodies described to Human Rights Watch how he found them:

I was busy helping the surviving residents leave the town when the fiancé of one the Bayasi women asked me to go with him to check on her. We went to the house of Mustafa Ali Bayasi. We entered. We saw no one in the first room. As we entered further into the house, we got to a room where we found so many corpses. Mothers and children piled on top of each other. One mother was still covering her son. I thought he may have survived but as I turned her over, I saw that he had been also shot. My friend’s fiancé was also killed. We closed the windows of the house because we did not want any wild animals to come in.

In Ras al-Nabe` residents also told Human Rights Watch that they located the bodies of entire families, including children, who were killed together. Their wounds, including gunshot wounds to the head and chest, and the location of the bodies, sometimes found in piles on the street, led them to conclude that they had been executed.

Two Ras al-Nabe` residents told Human Rights Watch that during the evening of May 3 they saw near the edge of the neighborhood a pile of approximately 30 corpses, including at least 7 women and 6 children, primarily from the Suleiman and Taha families. One resident, Bassam, told Human Rights Watch that after seeing armed men whom he believed were members of the security forces or army he heard his neighbor from the Suleiman family screaming in the street that his parents had been killed. Bassam said that he found the neighbor standing over the 30 bodies on the street.

Witnesses told Human Rights Watch that the forces who entered the two towns were a mix of regular government troops; members of the National Defense Force, a paramilitary group organized earlier in the year by the government from pro-government militias; and armed pro-government residents of neighboring villages. One witness said that soldiers who enteredher house had black tags on their sleeves identifying them as Special Forces. Reporters for pro-government media outlets on May 2 interviewed soldiers on the outskirts of al-Bayda, who indicated that it was the army and National Defense Force that led the attack.

Human Rights Watch has previously documented summary and extrajudicial executions by government and pro-government forces following ground operations in many parts of Syria, including in Daraya, a suburb of Damascus, and Homs and Idlib governorates. Human Rights Watch has also documented executions carried out by opposition fighters in areas under their control in Homs and Aleppo governorates and has just concluded a field investigation into executions committed by opposition fighters during their offensive in Northern Latakia in early August.

The UN Security Council should ensure accountability for these crimes by referring the situation in Syria to the International Criminal Court (ICC), Human Rights Watch said. The Security Council should also insist that Syria cooperates fully with the UN Human Rights Council Commission of Inquiry by giving it unrestricted access to al-Bayda and Baniyas. The Syrian government should make public any findings by the government committee that Haidar, the government minister, said had been formed to investigate the killings in al-Bayda and Baniyas.

“The Security Council has the opportunity to deter future killings – not just by chemical weapons, but by all means and by all parties–by referring the situation to the ICC,” Stork said. “As the US and Russia negotiate over Syria’s chemical weapons, they should remember that for the victim and their relatives, the method of killing is secondary.”