After three years of negotiations, 82 countries have adopted a political declaration that seeks to better protect civilians from the use of explosive weapons in populated areas. The international pledge is the first to formally address the long-standing practice of using aircraft bombs, artillery, rockets, and missiles in villages, towns, and cities – the leading cause of civilian casualties in armed conflict.

Certain explosive weapons can maim and kill over a wide area due to their large blast and fragmentation radius, inaccuracy, or delivery of multiple munitions at the same time.

The declaration was endorsed at a high-level event in Dublin on Friday, hosted by Ireland’s Foreign Minister Simon Coveney. Sharing the stage were the United Nations disarmament chief, Izumi Nakamitsu, the International Committee of the Red Cross president, Mirjana Spoljaric Egger, and Laura Boillot, coordinator of the civil society umbrella group the International Network on Explosive Weapons, of which Human Rights Watch is a co-founder. Their organizations have spent the past decade urging governments to recognize and tackle the harm caused to civilians from the use of explosive weapons in populated areas. 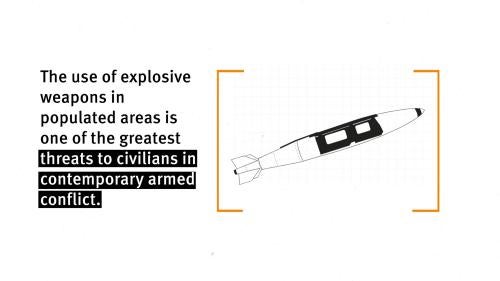 But the declaration goes further than simply urging better compliance with the laws of war by committing its signatories to adopt policies and practices that prevent and address harm. For example, they should take direct and indirect effects into account when planning and executing attacks, assist victims, collect and share data, and hold meetings to follow-up on implementation.

This declaration could play a valuable role in reducing the harm caused to civilians by explosive weapons, but strong interpretation and effective implementation will be crucial to ensuring its success. Governments should interpret and implement the declaration in a way that maximizes its goal: to protect civilian populations.