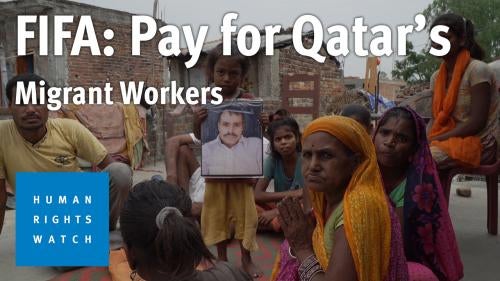 (London) – Hundreds of thousands of migrant workers in Qatar have not received financial compensation or any other adequate remedy for serious labor abuses suffered while building and servicing infrastructure for the FIFA World Cup, which begins in November 2022, Human Rights Watch said today.

On May 19, Human Rights Watch, Amnesty International, FairSquare, and a global coalition of migrant rights groups, labor unions, international football fans, abuse survivors, and business and rights groups said that the Fédération Internationale de Football Association (FIFA) and the government of Qatar should provide remedy for serious abuses that migrant workers have suffered since the 2022 World Cup was awarded in 2010. These include thousands of unexplained deaths and injuries, wage theft, and exorbitant recruitment fees. Human Rights Watch has opened a global campaign, #PayUpFIFA, to support this coalition call. Amnesty International is releasing a report, “Predictable and Preventable,” setting out how FIFA and Qatar can remedy 12 years of abuses.

“FIFA and Qatar have failed migrant workers, who have been essential for the 2022 World Cup, but they can still provide compensation to those seriously harmed and the families of the many who died,” said Minky Worden, director of global initiatives at Human Rights Watch. “FIFA should immediately set aside the funds needed to provide an adequate remedy and avoid the legacy of a ‘World Cup of Shame.’”

Over the last decade, human rights groups have repeatedly documented the widespread abuses workers face under Qatar’s kafala (sponsorship) system, which can give rise to forced labor. This is despite labor reforms that Qatari authorities have introduced in recent years in response to a forced labor complaint before the International Labour Organization. As recently as March, Human Rights Watch documented wage theft for up to five months at a prominent Qatari trading and construction firm with FIFA-related projects.

When workers engaged in stadium-related projects that are held to higher global scrutiny and standards do not have adequate protections, workers outside stadium-related projects are unsurprisingly prone to greater abuses. Moreover, Qatar’s poor human rights record creates other serious concerns, including severe restrictions on free expression and peaceful assembly, state policies that discriminate and facilitate violence against women, and a repressive environment against LGBT residents and visitors.

When FIFA, the global football governing body, awarded the 2022 tournament to Qatar, it knew or should have known that the migrant workers building the massive infrastructure would face grave risks to their human rights. Yet FIFA neither imposed labor rights conditions nor undertook effective human rights due diligence, Human Rights Watch said.

For Manju Devi, a 38-year-old Nepali woman whose 40-year-old migrant worker husband, Kripal Mandal, died in Qatar in 2022, the only “legacy” of the upcoming World Cup is the outstanding loans her husband took out to pay for the job that he died doing. Like most migrant workers in Qatar, Mandal had borrowed money at exorbitant rates to pay recruitment fees, a debt that continues to increase. While Qatar prohibits charging migrant workers recruitment fees and related costs, the government rarely enforces this regulation.

Mandal’s family said that he worked in construction for a supply company that assigned him to the airport and stadiums. His wife is still grappling to comprehend his death from a heart attack. “I cannot say what the reason behind his death is,” Devi told Human Rights Watch. “Whether it is the cause they reported or something else, we cannot tell … In the evening he was talking properly and laughing, … but he died at around 3 a.m. the next morning.”

The family did not receive any compensation for his death, and his employer even failed to pay the 15 days of salary he was contractually owed. Devi, a mother of five, said, “When he was alive, there was an assurance that there is someone who earns. Now after he died, our breadwinner is no longer alive. It is very difficult.”

“Qatar’s worker’s rights reforms came very late in the World Cup preparation, are woefully inadequate, and are poorly enforced,” said Worden. “Large numbers of migrant workers died because Qatar lacked a human rights framework that protected workers and allowed them to report dangerous working conditions, wage cheating, and forced labor. Workers do not need to die to deliver the World Cup or any mega-sporting event.”

Despite these positive developments, FIFA still needs to provide remedy to migrant workers who suffered serious abuses or their families. This includes responsibility toward workers directly employed in World Cup projects and those who have built and serviced a wider range of projects for tournament preparation and delivery, including transportation, accommodations, security, and cleaning, among others.

FIFA needs to work with Qatari authorities in the six-month leadup to the 2022 World Cup to establish a comprehensive program to address abuses suffered by migrant workers, Human Rights Watch, Amnesty International, Fair Square, and the other coalition members said. FIFA should set aside at least $440 million, equivalent to the prize money provided to 2022 World Cup teams, to invest in funds to compensate workers and improve worker protections.

The remediation program should be governed in a participatory way following consultation with stakeholders, including migrant workers, surviving family members, and trade unions. It needs to be easily accessible to workers and their families, many of whom will no longer be in Qatar. And it needs to offer a timely remedy for a wide range of unaddressed abuses since 2010.

Players, fans, FIFA sponsors, national football associations, and others can play an important role in securing a positive legacy for this World Cup by calling for support for a compensation fund to remedy the harm to migrant workers, Human Rights Watch said.

“The deaths of migrant workers in Qatar have taken a massive emotional and financial toll on their families,” Worden said. “In line with FIFA’s human rights commitments and Qatar’s obligations, they need to provide financial compensation to the migrant workers harmed building the World Cup and some financial respite for struggling families.”