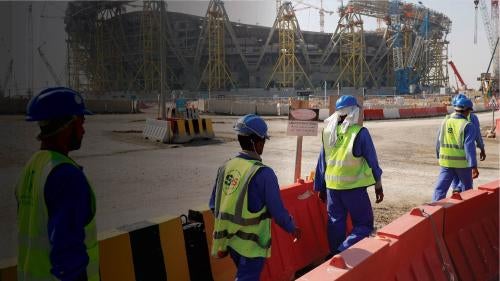 There is no Qatar World Cup celebration without remedy for abuses of migrant workers.

The FIFA World Cup Qatar 2022 kicks off in November. Yet the “beautiful game” of football that unites the world, with a global audience of over 3.5 billion, is stained with human rights abuses. Since 2010, when FIFA awarded the 2022 World Cup to Qatar despite its poor human rights records and massive infrastructure deficit, thousands of migrant workers have lost lives to unexplained causes or suffered injuries, and many more have been victims of wage theft by their employers.

FIFA has failed to meet its human rights responsibilities, and Qatar its obligations, to both prevent such abuses and to provide adequate remedy to victims and their families. Because of this failure, Human Rights Watch, Amnesty International, FairSquare, and a coalition of other groups have called on FIFA President Gianni Infantino to provide remedy for abuse of migrant workers' rights in Qatar.

FIFA and Qatar need to step up and put in place a comprehensive program using a participatory process including workers and trade unions to provide remedy, including financial compensation, that is easily accessible to migrant workers and their families. FIFA should reserve an amount at least equivalent to the US$440 million prize money provided to teams participating in the 2022 World Cup, which can be invested in funds to provide remedy to workers, and initiatives to improve workers’ protections. There is nothing Qatar nor FIFA could ever do to make up for the loss of a loved one, but financial compensation to struggling families for migrant worker deaths will reduce lasting harms.

Socially conscious players and fans don’t want to be associated with a World Cup built on human rights abuses. Join forces with Human Rights Watch: tell Qatar and FIFA to provide remedy to the victims of abuse. By taking the action below, your email will be sent directly to the leaders of FIFA.

FIFA has the resources and the responsibility, tell them not to leave victims and their families behind.

>> The Remedy Call for Abused Migrant Workers in Qatar

>> "How Can We Work Without Wages?" Salary Abuses Facing Migrant Workers Ahead of Qatar’s FIFA World Cup 2022

>> How the French Soccer Team Can Support Human Rights