Seven Ukrainian civilians executed by Russian soldiers in two separate incidents. A case of repeated rape. These are just two of the many Human Rights Watch findings on apparent war crimes committed by Russian forces in recent weeks.

They show unspeakable, deliberate cruelty and violence on the part of Russian soldiers. One of the executions took place on March 4 in Bucha, a town northwest of Kyiv. Five Ukrainian men were told to take off their jackets and boots, kneel on the roadside and put their T-shirts over their heads. Then one of them was shot at short range. 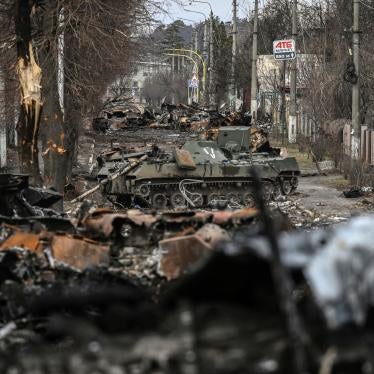 Russian troops recently withdrew from Bucha, and TV crews later filmed dead bodies strewn in the street and burnt-out cars. We are concerned that many such deaths may be the result of war crimes. It is too early to say for certain now, and legal proceedings are still at a nascent stage, but that is why it is important for the evidence to be established.

We have also documented a number of apparent war crimes in other areas that need urgent investigation. Take, for instance, Russia’s attacks that killed civilians and destroyed civilian buildings, including hospitals; the use of banned weapons such as cluster munitions and anti-personnel landmines, and blocking access for humanitarian supplies to towns under siege. We have also documented the apparent abuse of Russian prisoners of war.

International collaboration is vital to investigate every such case and bring those responsible to justice. It is good to see that the Ukrainian authorities have opened an investigation into what happened in Bucha, and that the prosecutor at the International Criminal Court last month opened an investigation into alleged war crimes. The United Nations Human Rights Council also opened a Commission of Inquiry into violations of the laws of war in Ukraine, and its work could provide important assistance to the ICC and other judicial authorities.

As these investigations get underway, we must also ensure the adequate preservation of evidence. Human Rights Watch has verified and assessed hundreds of videos and photographs so far and is ensuring that all of it is being carefully logged and archived. Crime scenes should be cordoned off and forensic specialists given urgent access.

Finally, members of the international community need to maintain political will, both in the medium and long term. This is the beginning of what might well be a long process, but as yet more terrible evidence emerges from Ukraine, it is clear that the work of gathering and investigating is indispensable.