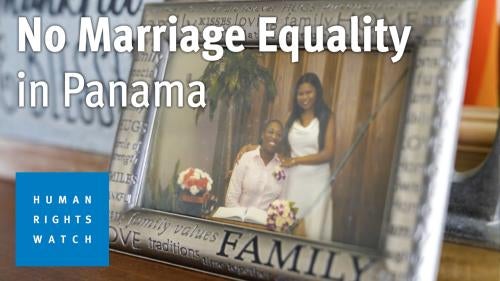 The following is an interview with Iván Chanis Barahona, a lawyer and human rights activist currently serving as president of Fundación Iguales, a non-profit organization based in Panama that promotes human rights and respect for diversity. The interviewer is Cristian González Cabrera, a researcher in the lesbian, gay, bisexual, and transgender (LGBT) Rights Program at Human Rights Watch, where he focuses on Latin America and the Caribbean.

Countries in the Latin America region, including Panama’s immediate neighbors, Colombia and Costa Rica, have made great strides with respect to marriage equality. Why do you think Panama is lagging?

A mix of a lack of political leadership and a system of justice that undervalues certain human rights. When decisionmakers who are supposed to protect us are an impediment to justice for same-sex couples and their families, our democracy and all Panamanians suffer. Instead of being a bridge that connects the world, Panama has become a territory that bucks the democratic trend in the Americas to expand the rights of LGBT people.

What has your organization, Fundación Iguales, done to change public opinion on marriage equality?

Fundación Iguales was founded with the goal of changing public opinion regarding LGBT people, and specifically regarding the issue of civil marriage for same-sex couples. Our mission is to eliminate discrimination based on sexual orientation and gender identity by establishing programs to raise awareness of sexual diversity and promote human rights. We advance this mission by putting forth an LGBT policy agenda and harnessing the power of storytelling to engage a broader sector of Panamanian society. We aim to highlight what’s really at stake in the fight for LGBT rights and dignity: real people and real families.

In your experience representing same-sex couples in Panama, what are the most common human rights violations that they experience due to a lack of marriage equality?

Same-sex couples are invisible to the state, which has created a host of violations of their rights. Lack of access to economic rights is particularly difficult, like the inability to get a joint loan to buy a house, file taxes jointly, or add a partner to one’s social security entitlement.

Same-sex couples are also unable to legally protect their families and children. Since they can’t get married, they can’t adopt. Recently​​, the National Assembly of Panama passed a new law on adoptions, which included a prohibition on adoption by same-sex couples. Even though the president partially vetoed this law, he did not object to these discriminatory provisions.

All this serves to perpetuate a negative societal view of same-sex couples, when they are just like any other family in Panama, trying their best to serve society and live their lives in search of happiness.

Legally, what needs to change for marriage equality to become a reality in Panama?

Panama is awaiting the decision of the Supreme Court of Justice in a case that challenges the constitutionality of the legal provisions that prohibit marriage between same-sex couples. The court has not ruled on four separate cases in which couples married abroad have requested the registration of their marriages under the laws of Panama, which is the legitimate right of every national. The first case was filed in 2016.

Until now, what has been the authorities’ approach toward reform of these provisions?

Nevertheless, this and other proposed changes—such as the amendment to article 4 of the Constitution, that sought to subordinate international law to national law—created social chaos that lasted for months and divided Panamanians. Based on press accounts, about a hundred young people, students, and human rights activists were detained during the protests, some arbitrarily. Some detainees suffered police abuse.

The situation was aggravated by hate speech from the legislature. While a diverse group of activists protested outside the National Assembly, Deputy Jairo “Bolota” Salazar addressed the crowd and said, “they are gay, and they cannot enter [the building].” This unacceptable and discriminatory remark by a lawmaker monopolized the national news and reinforced existing stereotypes.

We are vigilant in denouncing the discriminatory proposals of a minority group of deputies. They base their legislative agenda on restricting rights, promoting stigmatization, perpetuating discrimination, and contravening our national Constitution and international human rights commitments.

In the face of an antagonistic legislature, what other strategies is Fundación Iguales pursuing to push for marriage equality?

In addition to supporting the four cases that are awaiting rulings from the Supreme Court of Justice, we work on human rights education campaigns, which explain the importance of these cases and the rights of same-sex couples and their families. We undertake advocacy with the decisionmakers and promote political participation. We have created alliances between different social movements, such as with youth, women, and afro-descendants, with a cross-cutting human rights perspective. We foster LGBT visibility and participation in international organizations, especially in the Inter-American human rights system.

Our most important project is the Sí Acepto [I Do] campaign. It launched in 2020 with a national public education campaign that elevated the voices of unexpected allies and same-sex couples, sharing why they believe civil marriage for all families upholds Panamanian values. We have been generating conversations in local communities through a robust national storytelling campaign on TV, radio, and social media. The campaign has presented an affirmative case for the freedom to marry, all while calming the fears and misinformation being spread by anti-LGBT groups.

What other challenges exist in Panama for LGBT people?

Panama provides no anti-discrimination protections for LGBT people, nor does it prohibit hate crimes based on sexual orientation and gender identity. We do not have a gender identity law that allows transgender people to have documents that reflect their gender identity. Panama is one of the few countries in the region that does not have a law to protect human rights defenders.

A critical moment was in 2020 when the human rights situation became precarious for transgender people due to public policies related to the Covid-19 pandemic. In April of that year, Panama implemented a gender-based quarantine schedule, requiring men and women to remain in quarantine on alternate days. However, as documented by Human Rights Watch, the move resulted in police and private security guards targeting transgender people for being out “on the wrong day.” In some cases, police detained and fined them or prevented them from buying essential goods. The incidents occurred when trans people sought to respect the quarantine measure based on both their gender identity, and on their sex marker on their national identification cards.

In September 2020, Danielle and Marian, two young lesbians, were arrested and fined simply for kissing in public. These are not isolated cases, but the direct result of a discriminatory system that disrespects human rights.

What gives you hope and encourages you to keep fighting for LGBT rights in Panama?

The younger generations, and their clarity on aspiring to a society where discrimination is unacceptable. The resilience of the same-sex couples that, even when facing deep inequalities, keep fighting for respect and the protection of their families. Seeing how public opinion is slowly but categorically evolving to understand that this is a matter of justice. I’m optimistic that Panama will sooner or later have marriage equality. And from there, we will continue the work to respect everyone who suffers discrimination, fostering Panama’s democracy.