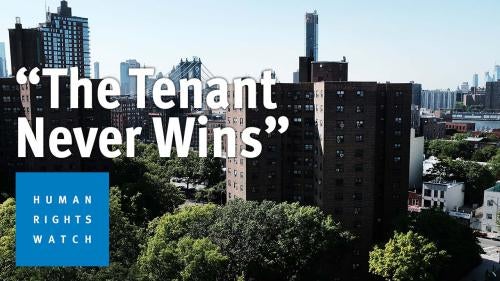 The 98-page report, “The Tenant Never Wins: Private Takeover of Public Housing Puts Rights at Risk in New York City,” examines the impact of the New York City Housing Authority (NYCHA) program called Permanent Affordability Commitment Together (PACT), which utilizes a federal program developed by the US Department of Housing and Urban Development called the Rental Assistance Demonstration (RAD) to permit the privatization of some housing. Under PACT, which began in December 2016, NYCHA leases its public housing developments to private companies for 99 years and privatizes the buildings’ management. Human Rights Watch found that PACT conversions also mean the loss of key protections for residents, and, in two developments, may have contributed to increased evictions.

“Decades of federal disinvestment have left many New York City public housing buildings with terrible conditions that can be dangerous to residents’ health,” said Jackson Gandour, business and human rights fellow at Human Rights Watch. “PACT was supposed to make up for the funding shortfall to improve buildings, but it has entailed insufficient oversight and the loss of key protections for tenants' rights, and, in two cases, we found that the program was tied to increased evictions."

The report is the first comprehensive study examining the impact of PACT on residents’ human right to housing. Human Rights Watch carried out in-depth analysis of dozens of legal and other documents, and interviewed 17 people across five public housing developments that had been converted to private management under the PACT program, 10 residents of NYCHA-managed housing, lawyers, housing policy experts, and members of civil society and community organizations.

Congress has consistently cut the budget for public housing, which relies heavily on federal funding. Funding for major repairs declined by 35 percent, in real terms, between 2000 and 2021, and funding for day-to-day operations and maintenance has been consistently insufficient to cover operating needs. As a result, NYCHA housing has gone from being of equal or better quality than comparable private sector housing to being plagued by severe issues such as mold, peeling lead paint, and failing heat.

To compensate for chronic government underfunding, the US Department of Housing and Urban Development created the RAD program, which allows local governments to “convert” public housing from Section 9 of the Housing Act to Section 8. This legal change enables the involvement of the private sector, the ability to take out mortgages on the buildings, and access to more generous public housing subsidies. Many cities, including New York City, have used RAD to significantly involve for-profit companies in the operation of public housing, profiting from the generous subsidies and tenant rents.

PACT has enabled NYCHA to secure financing for needed repairs at the cost of losing certain key protections for tenants, including provisions of a federal monitoring agreement between NYCHA and the federal government concerning oversight of conditions in NYCHA’s buildings. Many resident protections, including those obligating PACT managers to make repairs and meet federal Housing Quality Standards, are reflected in the contracts underlying PACT deals. But these contracts do not provide residents rights to enforce these protections.

Human Rights Watch reviewed eviction data provided by NYCHA and found that, of the six PACT developments that converted before 2020, when an eviction moratorium was enacted, evictions increased in two large PACT conversions that together house 6,500 people. One of these developments, Ocean Bay in Queens, was NYCHA’s inaugural PACT conversion. Between 2017 and 2019, it had an eviction rate more than three times higher than the NYCHA average. They “put you out faster,” one Ocean Bay resident told Human Rights Watch.

Some PACT residents described continuing struggles to get apartment repairs and feeling as though they had no choice but to accept PACT management.

“We had to suffer for a week, taking bird baths, heating up water on our stoves, and sleeping in our hoodies and sweats and socks and quilts, in the dead of winter,” one PACT resident said, describing going without heat and hot water for a week one winter.

New York City and New York State should update their eviction laws to conform with international human rights standards, which prohibit evictions that place tenants at risk of homelessness or other human rights violations, Human Rights Watch said. NYCHA should improve the oversight and accountability of PACT, including by creating an independent entity to oversee PACT developments.

Nationally, Congress should fully fund public housing to ensure that local governments are able to maintain this critical resource for low-income residents, Human Rights Watch said. In addition, the Department of Housing and Urban Development should improve oversight of the program by monitoring and releasing comprehensive data on evictions and housing conditions in RAD developments.

The US government’s regressive approach to public housing is part of a global trend of countries providing insufficient funding for programs that help realize the human right to housing. On January 17,  Human Rights Watch released a report finding that conditions in temporary accommodation in the UK violate human rights standards. The report said the UK government should improve the quality of temporary accommodation and reverse declines in social housing investment.

“For decades, the US has starved public housing of funding, pushing private-sector approaches instead, but privatization alone isn’t the cure for a lack of affordable housing,” Gandour said. “Cities can avoid risky strategies to finance critical repairs, and can provide safe, quality, affordable housing for decades to come if governments would just invest more.”