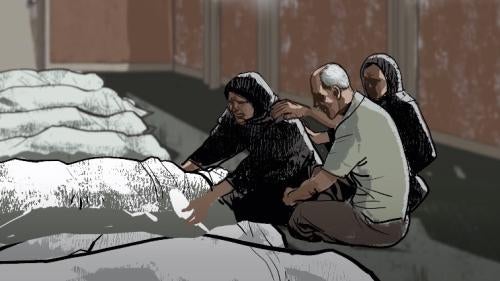 On May 19, 2015, two men entered an exam hall at Cairo’s Ain Shams University and asked to talk with Islam Atito, a 22-year-old engineering student. After Atito finished his exam, his colleagues saw—and CCTV cameras recorded—what looked like police in civilian clothes chasing him and then pushing him into a car.

Roughly 24 hours later, Egypt’s Interior Ministry announced that security officers had killed Atito in a desert hideout on the edge of Cairo after he supposedly opened fire on them. When his family received his body, however, they found it had signs of abuse, including broken ribs. Despite the compelling evidence that Egyptian security forces abducted and executed Atito, who had no visible engagement in Egyptian politics, according to his colleagues, no officer was prosecuted.

Human Rights Watch found in an extensive report released on September 7 that Egyptian Interior Ministry forces have killed dozens, perhaps hundreds, of secretly held dissidents like Atito in extrajudicial executions in recent years. And like Atito, the government claims these men were killed in “shootouts.” But as I researched these killings, it became clear to me that Egyptian authorities didn’t seem to care much whether their statements were convincing; they sometimes even released photographs showing that the victims had apparently been handcuffed at the time when they were killed.

This pattern of wanton killings is a testament to the formidable impunity security forces have enjoyed under President Abdel Fattah al-Sisi, who rose to power after orchestrating the military removal of Mohamed Morsi, Egypt’s democratically elected president, in July 2013. But even as we released our report last month documenting these killings, US, French, Italian, Jordanian, and other foreign troops were in Egypt participating in the Bright Star joint military exercises, essentially providing military training on Egyptian soil for Egyptian troops.

Bright Star is only a small example of the military aid and privileges that Egypt gets from its allies, despite its appalling human rights record. After weeks of deliberations in the late summer, the Biden administration decided against withholding US$300 million in military financing for Egypt that, under US law, is supposed to be attached to human rights conditions. Instead, it only withheld $130 million of that tranche, which Egypt can still get if al-Sisi’s government meets some quite weak human rights benchmarks. Even if the US ultimately withholds a small part of this funding, it continues to provide well over $1 billion in military support to Egypt each year. That ongoing support for al-Sisi’s government in the face of a deplorable and deteriorating human rights situation in Egypt severely undermines Egyptians’ brave struggle for democracy and the rule of law a decade after the popular uprising that ended Hosni Mubarak’s authoritarian rule.

When the US or another Western government allied with Egypt has occasionally withheld small amounts of security assistance from Cairo, it helped secure the release of a few unjustly detained Egyptian and foreign nationals in al-Sisi’s prisons. But as soon as some are released, others are detained—another sign of where human rights are headed in Egypt under al-Sisi’s rule.

This is not just my assessment. I have met dozens of US and European officials who largely concur with the view of Human Rights Watch and other organizations, if only in private. Yet they bluntly say or politely whisper that other “interests” have priority, such as curbing migration and fighting terrorism, or maintaining commercial ties and safeguarding profits for the defense contractors that sell Egypt so many weapons.

Egypt has received $1.3 billion in military financing from the US almost every year since the early 1980s. The Biden administration recommended the same amount for fiscal year 2022. France, Germany, Italy and the United Kingdom all have in recent years approved huge weapons deals with Egypt, making it among the world’s top three importers of weapons. These massive purchases are often financed through loans provided to Egypt by these same countries; without those loans, Egypt couldn’t afford to seal so many arms deals. These Western countries also support Egypt’s soaring foreign debt through their votes in the International Monetary Fund, the World Bank and the European Bank for Reconstruction and Development, despite the fact that Egypt frequently ignores those agencies’ stated conditions for maintaining transparency, protecting human rights and fighting corruption.

The justifications are all too familiar. “We care about human rights, but Egypt is too big to fail,” so the narrative goes. “Too much pressure on Egypt would be counterproductive.” But that conventional wisdom is part and parcel of the dire state of human rights in Egypt. While weakly condemning al-Sisi’s record, the US and other countries, like France, rarely link their sweeping security assistance and weapons sales to human rights, even though they may contribute to gross abuses. Sometimes, they openly refuse to condition weapons sales on human rights.

In my meetings with US and European officials, I emphasize that the struggle for democracy in Egypt is the responsibility of Egyptians themselves. But unconditional foreign support to al-Sisi, and Egypt’s strongmen before him, has encouraged the deterioration of the situation in Egypt. It has so indulged the country’s ruling elite that they believe they will always get what they want from Washington and their other allies, even in the face of extrajudicial killings, torture, and other well-documented abuses—and even when these abuses target their own citizens. It is hard to believe that any country would get away with jailing and even killing US, British, Italian, and French tourists, activists, and journalists, like Egypt has under al-Sisi.

Egypt might seem stable under al-Sisi’s iron grip—another familiar justification for the status quo. But it is only superficially so. Egypt’s counterterrorism policies, marred by unlawful killings, home demolitions, and other gross abuses, have generated the very same conditions that breed new generations of violent extremists. Eight years after al-Sisi’s coup, Egyptian society also remains deeply polarized and impoverished. Al-Sisi basically promised that Egyptians would have to trade their political rights for economic stability and growth. But his government has failed at that Faustian bargain, with rising poverty against the backdrop of frantic, debt-driven spending with little or no public scrutiny on vanity projects like a new administrative capital outside Cairo and huge arms purchases. Meanwhile, the military’s opaque, vast business empire has reportedly swelled, seizing even more control of Egypt’s economy, as the officer class decides who is allowed to accumulate wealth or invest in certain businesses.

When a government undermines the rule of law to such a degree that its security forces kill dissidents with impunity and don’t even pretend to justify it for the outside world, don’t expect the rule of law to work for civil society or most businesses, either. After all, Egypt’s judiciary has also been heavily co-opted by al-Sisi’s government. He recently approved a law that allows the Constitutional Court to rule that Egypt does not need to abide by international court decisions against Egypt or agreements or treaties it has signed—regarding detention and torture, for example, or even a business arbitration.

After al-Sisi orchestrated his military coup in 2013, the authorities first began rounding up Islamists and anyone suspected of ties to the Muslim Brotherhood. But it was not long before his crackdown extended to Egyptian women and men from all walks of life. Being silent when abuses target certain groups just paves the way for those abuses to grow until no one is safe.

Reversing all the gains of the 2011 uprising that brought down Mubarak, Egypt has become a state where the military is the de facto ruler and the police and security services oversee the silencing of any opponents. An illusion that sometimes resonates among Western officials is that the Egyptian army could be a modernizing force, and that is somehow, like al-Sisi, “moderate.” But like every male in Egypt, I had to serve in the army. I saw how the military’s culture is deeply patriarchal; it is anything but a secular institution. The fight between the army and radical Islamists often appears to be a mere power struggle. For example, apparently to justify the military’s abuses, including unlawful killings, Egypt’s Dar al-Ifta, the country’s highest religious authority, frequently releases statements supportive of al-Sisi and the army, even casting dissidents as “nonbelievers” who deserve to be fought and killed.

Egypt’s partners are not in a position to simply instill democracy in Egypt. But every day that passes without halting foreign military assistance and sanctioning the officials and institutions responsible for all these human rights abuses betrays Egyptians’ pursuit of dignity and plays into the hands of al-Sisi and rest of Egypt’s ruling oligarchy. Only constant, sustained pressure can convince them that they need to change, and that there will finally be real costs if they don’t. Otherwise, Egypt’s allies, led by the United States, are just supplying al-Sisi with the tools and political cover to continue his repression.