Widespread and systematic torture by the security forces probably amounts to a crime against humanity, according to the 63-page report, “‘We Do Unreasonable Things Here’: Torture and National Security in al-Sisi’s Egypt.” Prosecutors typically ignore complaints from detainees about ill-treatment and sometimes threaten them with torture, creating an environment of almost total impunity, Human Rights Watch said. 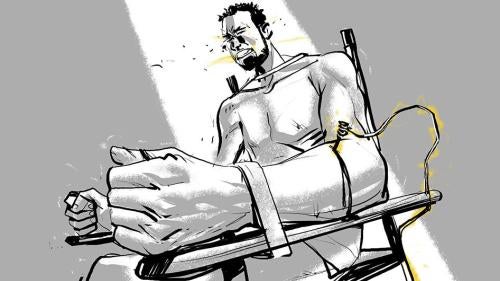 “President al-Sisi has effectively given police and National Security officers a green light to use torture whenever they please,” said Joe Stork, deputy Middle East director at Human Rights Watch. “Impunity for the systematic use of torture has left citizens with no hope for justice.”

The report documents how security forces, particularly officers of the Interior Ministry’s National Security Agency, use torture to force suspects to confess or divulge information, or to punish them. Allegations of torture have been widespread since then-Defense Minister al-Sisi ousted former President Mohamed Morsy in 2013, beginning a widespread crackdown on basic rights. Torture has long been endemic in Egypt’s law enforcement system, and rampant abuses by security forces helped spark the nationwide revolt in 2011 that unseated longtime leader Hosni Mubarak after nearly 30 years.

Human Rights Watch interviewed 19 former detainees and the family of a 20th detainee who were tortured between 2014 and 2016, as well as Egyptian defense and human rights lawyers. Human Rights Watch also reviewed dozens of reports about torture produced by Egyptian human rights groups and media outlets. The techniques of torture documented by Human Rights Watch have been practiced in police stations and National Security offices throughout the country, using nearly identical methods, for many years.

Under international law, torture is a crime of universal jurisdiction that can be prosecuted in any country. States are required to arrest and investigate anyone on their territory credibly suspected of involvement in torture and to prosecute them or extradite them to face justice.

Since the 2013 military coup, Egyptian authorities have arrested or charged probably at least 60,000 people, forcibly disappeared hundreds for months at a time, handed down preliminary death sentences to hundreds more, tried thousands of civilians in military courts, and created at least 19 new prisons or jails to hold this influx. The primary target of this repression has been the Muslim Brotherhood, the country’s largest opposition movement.

Human Rights Watch found that the Interior Ministry has developed an assembly line of serious abuse to collect information about suspected dissidents and prepare often fabricated cases against them. This begins at the point of arbitrary arrest, progresses to torture and interrogation during periods of enforced disappearance, and concludes with presentation before prosecutors, who often pressure suspects to confirm their confessions and almost never investigate abuses.

The former detainees said that torture sessions begin with security officers using electric shocks on a blindfolded, stripped, and handcuffed suspect while slapping and punching him or beating him with sticks and metal bars. If the suspect fails to give the officers the answers they want, the officers increase the power and duration of the electric shocks and almost always shock the suspect’s genitals.

Officers then employ two types of stress positions to inflict severe pain on suspects, the detainees said. In one, they hang suspects above the floor with their arms raised backwards behind them, an unnatural position that causes excruciating pain in the back and shoulders and sometimes dislocates their shoulders. In a second, called the “chicken” or “grill,” officers place suspects’ knees and arms on opposite sides of a bar so that the bar lies between the crook of their elbows and the back of their knees and tie their hands together above their shins. When the officers lift the bar and suspend the suspects in the air, like a chicken on a spit, they suffer excruciating pain in shoulders, knees, and arms.

Security officers hold detainees in these stress positions for hours at a time and continue to beat, electrocute, and interrogate them.

“Khaled,” a 29-year-old accountant, told Human Rights Watch that in January 2015, National Security officers in Alexandria arrested him and took him to the city’s Interior Ministry headquarters. They told him to admit to participating in arson attacks on police cars the previous year. When Khaled denied knowing anything about the attacks, an officer stripped off his clothing and began shocking him with electrified wires. The torture and interrogations, involving severe electric shocks and stress positions, continued for nearly six days, during which Khaled was allowed no contact with relatives or lawyers. Officers forced him to read a prepared confession, which they filmed, stating he had burned police cars on the orders of the Muslim Brotherhood.

After 10 days, a team of prosecutors questioned Khaled and fellow detainees. When Khaled told one prosecutor that he had been tortured, the prosecutor replied it was none of his business and ordered Khaled to restate the videotaped confession, or else he would send him back to be tortured again.

“You’re at their mercy, ‘Whatever we say, you’re gonna do.’ They electrocuted me in my head, testicles, under my armpits. They used to heat water and throw it on you. Every time I lose consciousness, they would throw it on me,” Khaled recalled.

Egypt’s history of torture stretches back more than three decades, and Human Rights Watch first recorded the practices documented in this report as early as 1992. Egypt is also the only country to be the subject of two public inquiries by the United Nations Committee against Torture, which wrote in June 2017 that that the facts gathered by the committee “lead to the inescapable conclusion that torture is a systematic practice in Egypt.”

Since the military unseated former president Morsy in 2013, the authorities have reconstituted and expanded the repressive instruments that defined Mubarak’s rule. The regularity of torture and the impunity for its practice since 2013 has created a climate in which those who are abused see no chance to hold their abusers to account and often do not bother even filing complaints to prosecutors.

Between July 2013 and December 2016, prosecutors officially investigated at least 40 torture cases, a fraction of the hundreds of allegations made, yet Human Rights Watch found only six cases in which prosecutors won guilty verdicts against Interior Ministry officers. All these verdicts remain on appeal and only one involved the National Security Agency.

Al-Sisi should direct the Justice Ministry to create an independent special prosecutor empowered to inspect detention sites, investigate and prosecute abuse by the security services, and publish a record of action taken, Human Rights Watch said. Failing a serious effort by the Sisi administration to confront the torture epidemic, UN member states should investigate and prosecute Egyptian officials accused of committing, ordering, or assisting torture.

“Past impunity for torture caused great harm to hundreds of Egyptians and laid the conditions for the 2011 revolt,” Stork said. “Allowing the security services to commit this heinous crime across the country invites another cycle of unrest.”