(Athens) – A law scheduled to take effect on September 16, 2021, that amends child custody provisions in Greece’s civil code places women and children survivors of domestic violence at risk, Human Rights Watch said today. The Greek government should take steps to immediately modify the law to ensure that protection of domestic abuse survivors and the principle of the best interests of the child are properly safeguarded, in line with international human rights obligations.

Law No. 4800/2021, “Reforms regarding parent-child relations, other family law issues, and other urgent provisions,” presumes that “joint and equal” parental custody of children is in the child’s best interest in cases of divorce, separation, or termination of cohabitation. In cases of “poor exercise of parental responsibility,” which may include domestic violence, a court can make an alternate custody determination in the child’s best interest, but “joint and equal” custody applies during a potentially lengthy court process, placing domestic abuse victims and their children directly at risk.

“A child’s best interests have to prioritize safety and security, and a presumption of equal shared custody puts domestic abuse survivors – the vast majority of whom are women – and their children in direct danger,” said Hillary Margolis, senior women’s rights researcher at Human Rights Watch. “The law needs to be amended to prevent putting women and children at unnecessary risk.”

Parliament approved the bill on May 20, 156 to 20. In an unusual break from party allegiance, two members of the ruling New Democracy party opposed the law. Opponents also included expert bodies such as the National Commission for Human Rights, and international and regional human rights bodies. 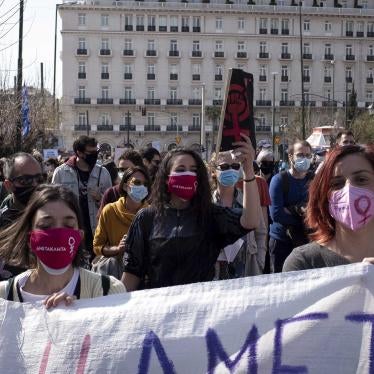 Enacting the law could force domestic violence survivors and their children into ongoing contact with their abusers, putting them at risk of further harm and even death, particularly as the period immediately after victims leave an abuser is especially dangerous. Abusers may also use child custody arrangements to harm victims physically, psychologically, or through economic pressure, or to deter them from leaving a relationship. Women in Greece already face multiple barriers, including victim-blaming and dismissive police response, to reporting domestic violence and seeking help.

Under the new law, a court may curtail the right to custody if a parent is “in breach of their duty to care” for a child or “if they are abusive or unable to comply” with custodial responsibilities. However, the legal process to determine whether a parent has been abusive can take years, during which an allegedly abusive parent could maintain co-custody and communication with the child and co-parent.

In cases of “imminent danger” to a child’s mental or physical health, a prosecutor can take immediate protection measures for up to 90 days, potentially renewable for 90 days, during which time the case should be brought before a court. However, the law makes no specific mention of measures to protect victims of intimate partner abuse or their children in cases of co-custody.

The law prioritizes a parent’s and their relatives’ right to communicate with a child, including in person, and presumes that the child should spend no less than one-third of their time with the parent they don’t live with. It does not require any determination of whether this is in the child’s best interests or recognize that communication or visitation with a parent who has committed domestic abuse – or their relatives – can be detrimental and dangerous for both the child and the other parent.

In a positive step, the law specifies the right to mediation when parents disagree about joint custody or if one parent fails to comply with a custody agreement, however this does not apply in domestic violence cases. It is unclear what documentation a parent may need for an exemption. International and regional rights bodies have explicitly warned against mediation in cases of violence against women, saying that prior evaluation by specialists should be used to ensure that such procedures do not increase risks or are not conducted against the victim’s will.

During public consultation on the bill, Greek expert organizations criticized its fundamental presumption that parents’ equal participation in the child’s upbringing is in the child’s best interests, rather than requiring case-by-case determinations.

As a party to the Convention on the Rights of Child, Greece is obliged to ensure that any legislative presumptions about the best interests of the child do not preclude individual determinations that take into account the child’s specific circumstances. The new law does not ensure that those individualized determinations will take place in a timely and effective manner.

Likewise as a party to the Convention on the Elimination of All Forms of Discrimination against Women (CEDAW), and the Istanbul Convention to combat violence against women, Greece has obligations to ensure that the health and safety of women are a core consideration in family law cases including custody decisions, which this law does not guarantee.

In a letter to Prime Minister Kyriakos Mitsotakis on May 17, the United Nations special rapporteur on violence against women and the chair-rapporteur of the UN Working Group on discrimination against women and girls in law and practice warned of heightened risks for domestic violence victims if the bill were adopted.

They asked Mitsotakis to share their analysis with Greece’s Parliament, but parliament members were reportedly unaware of the letter ahead of the vote on the bill. The UN and regional experts had previously stated that intimate partner violence against women must be considered in child custody determinations and that neglecting to do so discriminates against women.

It could also violate the European Union Victim’s Directive (2012/29/EU) establishing minimum standards on the rights, support, and protection of victims of crime. The directive requires member states to protect victims and their family members “from secondary and repeat victimisation [and] from intimidation and from retaliation, including against the risk of emotional or psychological harm.” It notes that domestic violence victims may need “special protection measures,” which may include prevention of contact between a victim and their family members and an offender.

A February European Parliament draft report noted that domestic violence “is clearly incompatible with shared custody and care” and that “the right of women to be protected and live a life free of physical and psychological violence should take precedence over the preference for shared custody.”

The law’s enactment comes amid a raft of legislation and policy initiatives in Europe aimed at promoting traditional conceptions of family life at the expense of women’s rights, including in ways that can curtail protections for women who experience domestic violence and perpetuate harmful gender stereotypes.

Greece’s government should urgently amend the law to ensure that it protects the lives and health of parents and children in line with international law including through meaningful protections for domestic violence victims and their children, Human Rights Watch said. The government should also establish a family court system, which Greece does not have, to adjudicate such matters, including trained experts to assist in determining a child’s best interests, conduct risk assessments for parents and children, and refer domestic violence survivors to specialist services.

Greece’s international partners, including the European Commission, the Council of Europe Commissioner on Human Rights, and UN experts on violence and discrimination against women should urge the Greek government to modify the law so that it does not endanger domestic abuse victims and contravene Greece’s obligations under international law. They should also push the government to ensure that all domestic abuse survivors have access to services including shelter, legal assistance, medical care, and psychosocial – mental health – support.

“This law will force women experiencing domestic violence and their children into prolonged contact with their abusers, exactly the opposite of the protection and support they need when leaving an abusive relationship,” Margolis said. “To respect the best interests of children, the Greek government should change its law so that child custody doesn’t play into the hands of abusers.”