Donate Now
When the United States announced in April that it would withdraw all US troops from Afghanistan, it raised concerns the move would come with cuts in development assistance. Yet dwindling foreign investment has already left Afghanistan’s government with too few resources to maintain its already inadequate healthcare system. Senior Web Producer Paul Aufiero speaks with Interim Women’s Rights Co-Director Heather Barr about a new report that shows how aid cuts are leaving women and girls without essential health care and why the country’s international donors need to step up their support.

What did you find when you visited Afghanistan for this report?

The announcement of a full withdrawal of US troops by September 11, 2021, made this research very timely. Along with the images of foreign flags being lowered and bases closing, Afghans hear a lot about casualties from the war. But what few people talk about is how many women are dying preventable deaths due to problems related to childbirth and how many babies are dying preventable deaths.

What we have seen over and over is that as troops drawdown, so does aid. More than 75 percent of the Afghan government’s budget comes from foreign aid, which keeps schools and hospitals open. But because of declining assistance, many healthcare facilities have seen their budgets decrease every year. The head of one government-run hospital in Kabul told me his budget has reduced by 30 percent over the last seven years. This year alone, it was cut by at least 15 percent. 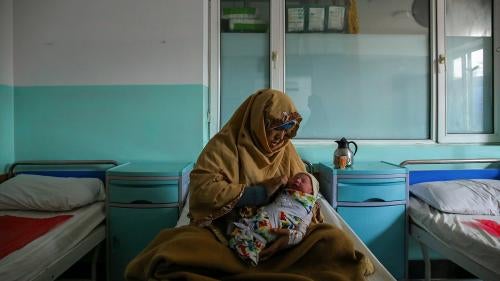 He has had to cut the hospital’s basic supplies, like gauze, scalpels, gloves, and sterilizing fluids. When you show up at a government hospital and need care, either you or a family member usually has to go to a pharmacy to buy everything the hospital will need to treat you. Now, if someone is giving birth in a government hospital, for example, they typically have to buy the gloves, gauze, and serum needed for it. I saw people who had to buy the tubes that connect the port on their hand to an IV drip. And I was told repeatedly that if you need a cesarean section, you may have to buy the scalpel. Afghanistan’s maternal mortality rate has fallen since the Taliban government was overthrown in 2001, but it is still 638 per 100,000 live births, a rate UNICEF calls “very high,” and barriers to women accessing health care, such as these costs for supplies, could be pushing that number up again.

That is unbelievable. How are people managing to receive health care under this system?

People are coming from villages all over the Kabul region to reach hospitals in the capital, some driving hours and braving armed clashes on the way.

I spoke with one woman who was in labor and had already spent 2000 AFN (US$26) to buy the supplies required for a natural birth. But while at the hospital, she became worried she was going to need a C-section, which would require different supplies. But the money she spent was all she had.

Poverty has long been a problem in Afghanistan, and a lot of people we spoke with lost their income because of the Covid-19 pandemic and have been living on nothing but tea and bread. If you are in that position, you cannot afford $26 in hospital supplies, plus transportation to and from the hospital. This results in a huge number of people not accessing care.

What are conditions like in hospitals when people can reach them?

People are crammed in at the hospitals. At one post-delivery room, we saw two women who did not know each other sharing a single narrow bed, and they had to wait like that after giving birth for six hours.

But as dire as it is for patients, the conditions for health workers are terrible too. At one delivery ward we visited, twelve women in labor were crammed into one room. Teams of 4 midwives, whose salaries are below $100 a month, deliver a stunning 45 to 50 babies during 24-hour shifts. They are not allowed to sleep and get little food in that time.

The pandemic has made the situation worse. The husband of a senior health official we interviewed died of Covid-19 six months earlier, leaving her a single mother of five. She feels she may have infected him through working with patients.

What other health crises are Afghan women facing?

There is also incredible pressure on women to get pregnant and have children. When they cannot, they are very likely to encounter domestic violence from their in-laws or husband. We interviewed one woman who had been desperately seeking fertility treatment, which is often of poor quality in Afghanistan and never provided by government facilities. When we met, she was waiting to see a doctor; her husband had told her this was her last chance to become pregnant, or he would take a second wife.

What is the state of women’s rights in Afghanistan and what can we expect after the US withdraws?

There has been incredible progress on women’s rights in Afghanistan. Millions of girls are in school.  Many more women are in the Afghan parliament, and women hold positions across government agencies. That did not exist when the Taliban ruled the country up until 2001.

But when I visited on the eve of the US announcement, people were frightened. One woman helping me conduct this research said people keep asking her why she has not left. She has some means, so leaving the country might be an option. But many others we interviewed are extremely poor and have no ability to leave. Nobody knows for sure what is going to happen over the next few months, but you can easily predict it is not going to be good for women.

People are worried about growing Taliban control over the country, including the possibility of a full takeover. The Taliban’s policies toward women are severely repressive. In theory, they allow girls to receive primary education with strict limitations. But some local commanders are not even permitting that.

Another frightening scenario is escalating violence. With the US withdrawal, there is potential for a power vacuum creating fighting between warlords and militias around the country, plus the Taliban and government forces. This would lead to more civilian casualties and block girls from going to school and women from accessing employment and essential services.

Why are donor countries pulling back on aid? You would think they would want to increase support after investing so much in Afghanistan.

I met with a few donors, including the US, as well as the European Union, the World Bank, and others. Some were very skittish about Human Rights Watch’s report. It may be embarrassing for donors that they are cutting their aid. I often think about the phrase, “You break it, you buy it.” Countries that joined the invasion of Afghanistan in 2001 have some responsibility for the current crisis in the country.

There are lots of humanitarian disasters happening around the world, and donors argue that Afghanistan should not get a disproportionate amount of aid because of that. Covid-19 crises have also caused a lot of countries to rethink aid donations.

But the international community has been directly involved in creating the situation in Afghanistan, and troop-contributing nations should ensure that their departure is a responsible one. If stories come out in the next few years about women dying because they cannot obtain health care or girls who can no longer attend school because theirs was shut down due to aid cuts, that should be damaging for any donors who think Afghanistan is no longer their problem.

What should happen next for Afghanistan?

Donors should be increasing or at least sustaining aid. One of the big efforts in 2001 was to set up a government-run health system funded by donors. It has been a major success in delivering health care to people around the country, even in Taliban-controlled areas, but that system is now flailing. International aid has made these services possible, and it should not be bled dry.