Houthi forces have fired scores of projectiles into Marib, which is held by Yemeni government forces. The Yemeni government’s Foreign Ministry said on February 27 that the Houthis had fired 10 ballistic missiles, which cannot discriminate between civilians and military targets, toward Marib city since the beginning of the month. The Saudi-led coalition has also increased strikes in Marib governorate; the Yemen Data Project found, based on open-source information, that half of all coalition airstrikes in February struck Marib, making it the most heavily bombed governorate that month. All parties to the conflict should refrain from using explosive weapons with wide-area effects in populated areas to minimize civilian harm.

“Houthi forces have committed serious abuses and shown a shocking disregard for the well-being and safety of civilians throughout the conflict,” said Afrah Nasser, Yemen researcher at Human Rights Watch. “The Houthis’ indiscriminate artillery and rocket attacks toward populated areas in Marib have put displaced persons and local communities at severe risk.”

The Houthi armed group has controlled most of Yemen’s northern highlands, including the capital, Sanaa, since 2014. In February, the Houthis escalated operations to seize the natural resource-rich Marib governorate, 170 kilometers east of Sanaa. Ground fighting between Houthi forces and coalition-backed Yemeni government forces has focused on the northern and western districts, where several camps for internally displaced people are located. Human Rights Watch interviewed by phone in March eight Yemeni aid workers, including four based in Marib, three Yemeni journalists in Marib, and two residents. 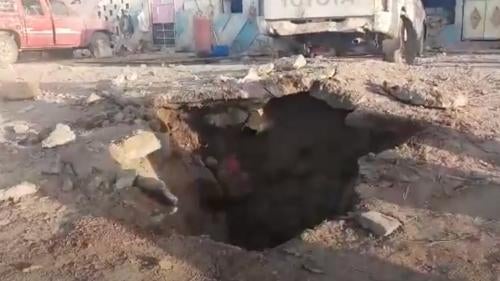 Local media and the Yemeni government reported that on March 1 a Houthi missile struck the residential al-Rawdah neighborhood in Marib city, killing a civilian driving his car and injuring nine others. The cousin of the man killed said, “He was killed by the missile’s fragments. Others with him in the car and on the street sustained serious injuries.”

Local media reported that on March 16 a Houthi missile struck a fuel station inside a market in eastern Marib city, killing two civilians and injuring seven others. Human Rights Watch reviewed video footage and interviewed a witness to the attack’s aftermath. “When I arrived at the site, the victims had just been taken to the hospital,” the witness said.

“It was tragic seeing blood and flesh of bodies spread on the ground and the damaged cars. The station’s owner said that one of his workers was hit by the missile’s fragments and killed immediately. The station is far away from the closest security checkpoint. The explosion was huge, and we felt it across all Marib city.”

One aid worker said that most newly displaced civilians reach Marib carrying their tents and blankets on their backs. “Fleeing civilians shared terrifying stories about the heavy shelling they escaped from, very often on foot, to reach other camps in Marib,” he said.

The Executive Unit for the Management of Displaced Persons Camps, the Yemeni government agency that administers the camps, said that Houthi forces fired upon four camps on the outskirts of Marib city in February forcing families to flee. Two civilians were injured in the attacks.

A journalist said, but Human Rights Watch could not confirm, that civilians reported that Houthi forces raided some camps in the Sirwah district of Marib and attempted to use displaced people as “human shields” against Yemeni government attacks.

The Executive Unit for the Management of Displaced Persons Camps reported that since the beginning of 2021, at least 14,000 civilians fled northern districts of Marib governorate for Marib city and the governorate’s southern districts. It said that there are currently displaced people in 143 camps concentrated in Marib’s al-Wadi district and Marib city. Some of these people have been displaced up to three times by different rounds of fighting.

This crisis of newly displaced, with families arriving daily, has increased humanitarian needs, putting pressure on host communities, public services, and stretching the capacity of aid agencies to respond. The International Organization for Migration reported in February that “civilians are bearing the devastating impact of renewed hostilities, seeing their homes and community infrastructure damaged, being forced to flee to safety.”

Aid workers said that access to areas of Marib affected by the fighting remains a problem. Some civilians trapped in the town of Sirwah, west of Marib, were unable to flee because of the fighting, and were in need of immediate assistance. One aid worker said, “I receive many phone calls from relatives of [internally displaced persons’] families in Sirwah pleading for help for those trapped because they are running out of food and medicine, and they are unable to flee the violence.”

Aid workers said that newly displaced civilians desperately need all basic services and have lost nearly everything they owned. At the same time, aid workers said that the available humanitarian assistance in Marib was inadequate to meet the growing population’s needs.

A local aid worker said that most aid groups it partners with are based in Sanaa and do not have branch offices in Marib: “We have been calling on international humanitarian partners to conduct humanitarian rescue efforts, but the response has been disappointing given the overwhelming displacement rate and growing humanitarian needs of the displaced.”

International aid to Yemen has experienced a dramatic shortfall in 2021. An aid-pledging conference organized by the United Nations in early March to raise funds for the humanitarian response in Yemen pledged only US$1.7 billion out of the $3.85 billion requested. Aid workers said that decreasing international aid has negatively affected their relief work.

Human Rights Watch in 2020 warned that civilians in Marib were at risk of Covid-19, heightened fighting, and an aid shortfall.

Marib is strategically significant as the last stronghold of the Yemeni government in northern Yemen and the center of the country’s oil and gas production. It is home to international oil companies and a gas pipeline that goes south towards the Gulf of Aden and the Red Sea.

While intensifying their advance on Marib, the Houthis have also increased their indiscriminate missile attacks on Saudi Arabia.

“There is a massive humanitarian crisis in Marib and current international aid efforts are not enough to meet the challenge,” Nasser said. “Yemen’s donors should do all they can to ramp up humanitarian support in Marib and press all sides to abide by the laws of war.”