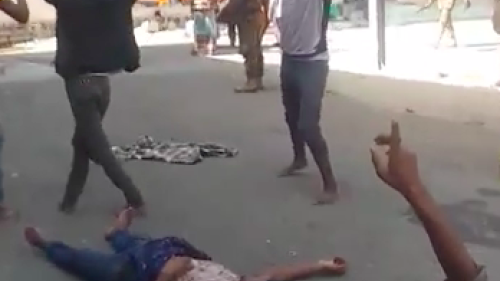 Hundreds of surviving migrants, mostly Ethiopians who were protesting their conditions in the center, were being treated for burns in hospitals in the capital where a heavy security presence has been deployed, posing problems for relatives and humanitarian agencies seeking access to the injured. The Houthi armed group, also known as Ansar Allah, should immediately allow humanitarian groups to assist those in need of medical or other aid. The United Nations Group of Eminent International and Regional Experts on Yemen should include the incident in its ongoing investigation into human rights abuses in the country.

“The Houthis’ reckless use of weapons that led to scores of Ethiopian migrants burning to death is a horrific reminder of the dangers migrants face in war-torn Yemen,” said Nadia Hardman, refugee and migrant rights researcher at Human Rights Watch. “The Houthi authorities need to hold those responsible to account and stop holding migrants in abysmal detention facilities where their lives and well-being are at risk.”

The Houthi armed group controls much of Yemen, including Sanaa. The International Organization for Migration (IOM) said that an estimated at least 6,000 migrants are held in detention across Yemen. Smugglers hold hundreds, if not thousands, more.

Those interviewed said the conditions in the IPNA facility were cramped and unsanitary, with up to 550 migrants in a hanger in the facility compound. They said they were not given mattresses to sleep on but could purchase a mattress from the guards. Food was limited and there was not enough drinking water, forcing detainees to drink from the faucets above the squat toilets.

They said that after weeks living in the overcrowded facility, the detainees organized a hunger strike to protest the conditions and their continued detention. They said that the only way to be released was to pay a 70,000 Yemeni rial (US$280) fee to the security guards. Migrants also described verbal abuse by the guards, including racial slurs, threats, and frequent swearing.

On the morning of March 7, the detainees said, they refused to eat breakfast. At about 1 p.m., the guards returned with lunch, which they also refused. A skirmish ensued during which detainees said the security guards identified the protest organizers and took them outside the hanger and beat them with wooden sticks and their firearms. The detainees responded by throwing plates, striking one security guard in the face, injuring him. The guards then rounded up the migrants nearby and locked them in the hanger, the detainees said.

The security guards left and returned several minutes later with security forces wearing the black, green, and gray uniforms of the Houthi forces. They were equipped with military weapons and equipment. The interviewees said that security guards told the detainees to say their “final prayers.”

One member of the newly arrived force climbed onto the roof of the hanger, which had open air areas, and launched two projectiles into the room. The migrants said the first projectile produced a lot of smoke and made their eyes water and sting. The second, which the migrants called a “bomb,” exploded loudly and started a fire. Human Rights Watch cannot verify the type of projectiles used, but the witness accounts indicate the possible use of smoke grenades, teargas cartridges, or stun grenades, also called “flash-bang” devices.

“There was a lot of smoke and a lot of fire,” a 20-year-old migrant said. “I don’t have the words to express what it was like – [the projectiles] exploded, and there was so much smoke and then there was a fire that spread. I was terrified, I felt like my mind was blocked with smoke. People were coughing, the mattress and blankets caught fire.… [P]eople were roasted alive. I had to step on their dead bodies to escape.”

About 10 to 15 minutes later, people outside the hanger helped break the walls and door, and took many survivors to nearby hospitals.

Human Rights Watch has received and analyzed video footage that corroborates the witness accounts, including two videos taken in the immediate aftermath of the fire in which scores of charred dead bodies can be seen lying in positions that suggests they were trying to flee but were overcome by smoke and fire.

Following the incident, a heavy security presence was deployed in the hospitals. Interviewees said that they saw the Houthi security forces rearrest migrants who were not severely injured.

The IOM said that the Houthis should give aid workers and health workers access to the hospitals.

On March 7, the Houthi Ministry of Interior issued a statement, holding the IOM and the UN “fully responsible” for the incident, “for its failure to play its role in providing shelters…for gathering and accommodating illegal immigrants.”

In correspondence with Human Rights Watch, Mohammed Abdulsalam, the spokesperson for the Houthis, said:

The incident that took place was a normal result that occurs in similar incidents all over the world. It should not be politicized or exploited outside of its normal context. If there should be an emphasis on solving such cases [the case of illegal immigrants to the country] it should be on these organizations to improve the conditions of boarding centers and insist on opening Sanaa Airport so that they can return home. Without these actions there is no point to suggest any other perspective. As a matter of fact, the authorities in Sanaa have no problems, crisis, or political backdrop with illegal immigrants at all. Therefore, official bodies in Sanaa issued a statement about this incident. Additionally, the embassies of the countries these immigrants belong to also issued statements to clarify the incident and its background.

Because of the pandemic and migrants being labeled carriers of Covid-19, the IOM has noted an increase in “forcible transfers” of migrants from Yemen’s northern governorates controlled by the Houthis to the south, which is under the nominal control of the internationally recognized Yemeni government. In 2020, over 15,000 migrants were forcibly transferred from the northern governorates to the south. The interviewees said they believed many of the migrants who survived the fire have been transferred to the south.

Human Rights Watch in April 2020 documented that Houthi forces had forcibly expelled thousands of Ethiopian migrants from northern Yemen using Covid-19 as a pretext, killing dozens and forcing others across the border with Saudi Arabia.

Human Rights Watch has previously reported on the perilous journey migrants undertake from the Horn of Africa to Yemen and Saudi Arabia, as well as the horrific treatment and abuses against them by parties to the conflict in Yemen. In 2018, Human Rights Watch found that Yemeni government officials had tortured, raped, and executed migrants and asylum seekers from the Horn of Africa in a detention center in the southern port city of Aden. In 2019, Human Rights Watch documented a network of smugglers, traffickers, and authorities in Yemen that kidnap, detain, and beat Ethiopian migrants and extort them or their families for money.

Houthi authorities should only use migration detention as an exceptional measure of last resort, and ensure that its migrant detention and deportation centers comport with international standards under the UN Standard Minimum Rules for the Treatment of Prisoners (“Mandela Rules”). Every detainee should be taken physically before a judge for judicial review of the legality and necessity of their detention within 48 hours of being detained. As a rule, detainees should be released unless those detaining them can show a clear legal and factual necessity, on an individual basis, for their detention pending trial or imminent deportation.

Houthi authorities should urgently engage with Ethiopian authorities whose nationals are languishing in Yemeni detention centers under their control. IOM should be allowed to arrange for the voluntary return of migrants in Yemen. UNHCR should have complete access to assess any claim for refugee status and should also ensure that all organized returns facilitated by the UN’s humanitarian agencies are voluntary and donors should support the reintegration of traumatized returnees upon their repatriation to Ethiopia.

“Donor governments should provide more support for the reintegration of migrants into their home communities to assist those who have faced unimaginable horror and trauma at every step along the Gulf migration route,” Hardman said.