On January 21, Congress approved in its first reading an amendment that would increase the number of votes needed in Congress to amend two articles of the constitution which prohibit abortion and same-sex marriage. It would increase the votes needed from the current two-thirds majority of the legislature to three-quarters, making future reform of these provisions extremely difficult. The proposed amendment still needs a second vote to be ratified. The next legislative session will begin on January 25.

“Honduras’ draconian legislation already bans abortions, even in cases of rape and incest, when the person’s life and the health are in danger, and when the fetus will not survive outside the womb,” said Ximena Casas, Americas women’s rights researcher at Human Rights Watch. “This decree will make it virtually impossible to carry out the recommendations from multiple international human rights bodies to end this violation of reproductive rights.”

Abortion in Honduras is already illegal in all circumstances. The country’s criminal code imposes prison sentences of up to six years on people who undergo abortions and medical professionals who provide them. The government also bans emergency contraception, or “the morning after pill,” which can prevent pregnancy after rape, unprotected sex, or contraceptive failure.

“By seeking to permanently and comprehensively block any possibility of accessing marriage for same-sex couples, the Honduran Congress is entrenching state-sponsored homophobia,” said Cristian González Cabrera, Americas lesbian, gay, bisexual, and transgender (LGBT) rights researcher at Human Rights Watch. “In a country where LGBT people already experience high levels of violence and discrimination, this effort to amend the constitution is sending the message that these people may be further stigmatized.”

Currently, all constitutional changes need to be ratified by a two-thirds majority in Congress in order to take effect. On January 21, Congress preliminarily approved the amendment after one debate session, even though its rules of procedure require three debates unless there is an “urgency” for any draft bill.

The reform violates international human rights law, which establishes that denying women and girls access to abortion is a form of discrimination and jeopardizes a range of human rights. The bill misleadingly refers to Article 4(1) of the American Convention on Human Rights, which protects the right to life. The Inter-American Court of Human Rights has made clear that Article 4(1) does not recognize an absolute right to life before birth. The court has also found that the embryo cannot be understood to be a human being for the purposes of Article 4(1).

Human Rights Watch has researched and seen firsthand the devastating consequences of banning abortion in Honduras. Among others, Human Rights Watch interviewed a woman forced to bear her rapist’s child; a woman facing jail after having a miscarriage; a pro-choice pastor who has faced death threats for her activism; and a doctor who cannot always act in her patients’ best interests. 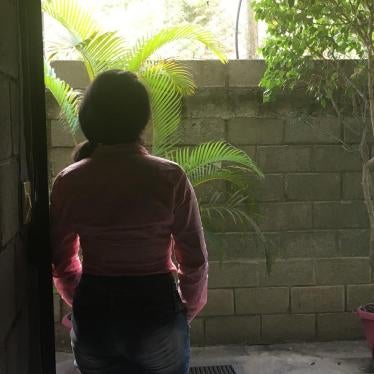 Criminalizing abortions does not prevent people from ending unwanted pregnancies. It just forces them to put their health and lives at risk to end pregnancies in unsafe settings, desperate, in fear of prosecution, and without access to medical care.

According to the Guttmacher Institute, in countries where abortion is prohibited or only permitted to save the life of the person who is pregnant, the abortion rate is higher than in those where abortion is allowed. The Working Group on the issue of discrimination against women in law and in practice estimated during its visit to Honduras in 2018 that between 51,000 and 82,000 unsafe abortions occur each year in the country.

The Special Commission charged with reviewing the proposed constitutional amendment noted that “creating a constitutional shield that makes it impossible to legalize the practice of abortion” is, in part, a response to advances in “Puerto Rico, Cuba, Uruguay and lately Argentina.” This, in addition to organizing by religious groups, suggests a concerted effort within Honduras to make it harder for the country to join others that are making progress toward compliance with international human rights law on this issue.

With respect to same-sex marriage, the proposed law violates regional human rights standards that prohibit arbitrarily treating same-sex couples differently from different-sex couples, including with respect to marital rights. In a landmark 2017 opinion, the Inter-American Court of Human Rights stated that all rights applicable to family relationships of heterosexual couples should extend to same-sex couples. This opinion is applicable in all 23 states party, including Honduras.

“This proposed constitutional amendment represents an effort to block the long-overdue progress that we’re seeing across much of the Americas region on sexual and reproductive rights and same-sex marriage,” Casas said. “The Honduran Congress should recognize that access to abortion and same-sex marriage is protected by international human rights law and reject this abusive amendment.”